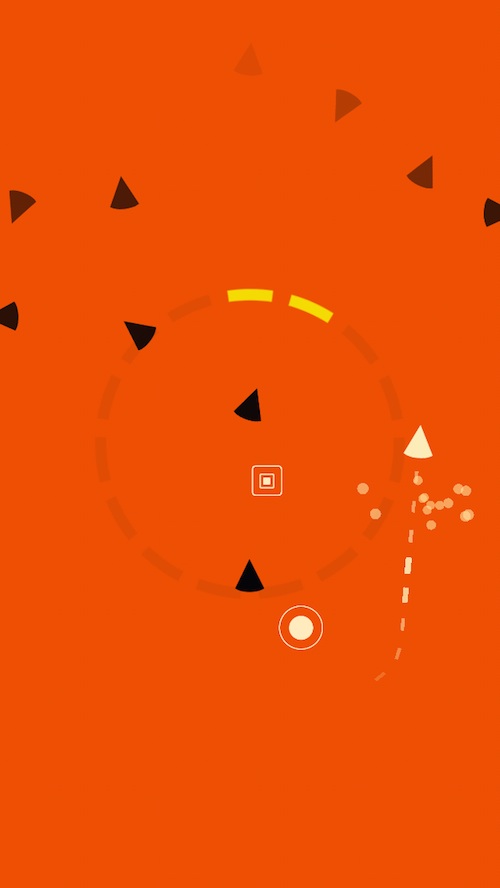 I never got into the Flappy Bird phenomenon. I remember hearing groups of people talking about it at a restaurant only days before its untimely demise wondering why something so simple was so popular. I think I have an understanding of that now.

15 Coins is a simple arcade style game that is impossibly difficult. Similar to Flappy Bird, it makes you want to keep playing over and over, no matter how poorly you perform, just to try to get one more coin before you die…

The design is simple the graphics are flat and bright. There is a dotted line in the center of the screen that represents the number of coins you must collect. Your “ship” is a cream colored pie-shaped object that trails a dotted line behind it wherever it moves.

The coins are blinking dots that appear in random places on the screen. When you successfully grab a coin, one of the dotted lines highlights in yellow. Every time you collect coins, another line is highlighted.

The game board is also peppered with black pie-shaped objects that represent the enemy’s ships. Avoid them at all cost. There is no way to destroy them. The enemies will follow you around, but will also disappear after a few seconds. So, as long as you stay away long enough, you will be clear of the danger.

There is one power up that will help make your job a little easier. The blinking square that sometimes appears is a freeze ray that will stop enemy ships in their path and make them vulnerable. When frozen, you can crash into enemy ships to destroy them. Be careful. The freeze ray only lasts a few seconds. You might accidentally crash into an active ship if the power up runs out. 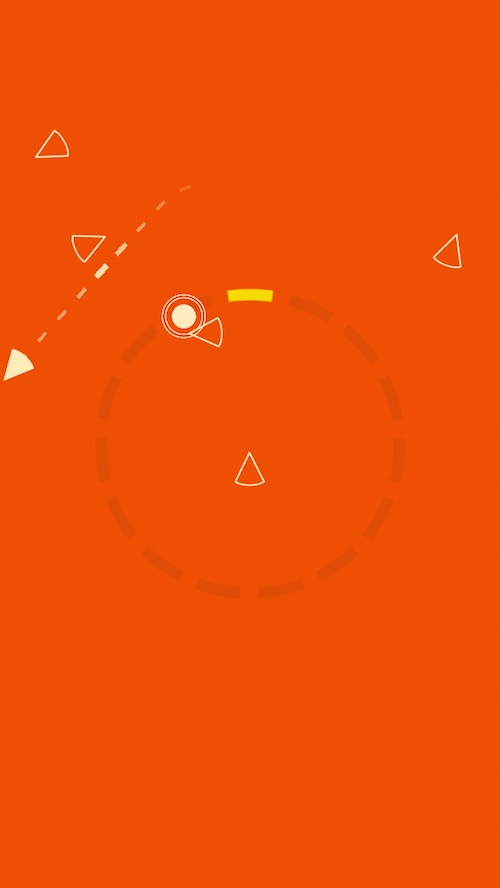 The goal of the game is to collect 15 coins. As easy as that may sound, it is far from simple. First, your ship does not move in a straight line very well. Every time you touch or tilt the screen, the ship curves sharply to the right or left. Obviously, this makes it nearly impossible to reach an end point with any level of accuracy. You can reduce the sensitivity of the curve, but it is still very hard to control.

Second, the enemy ships appear en masse and flood the screen, making it even harder for you to navigate the screen without crashing into bits. The enemies, called “Clone” ships, will follow you around, moving the same way you do at the moment they appeared on the screen. When you are bobbing and weaving because you can’t control your ship, having someone on your tail is a recipe for disaster.

The coins don’t stay where they are, either. They appear and remain on screen for a few seconds, maybe as long as five, but they will fade away if you don’t grab them in time. The power ups work the same way. If you don’t reach them in time, they will disappear.

If you do manage to collect a power up, every enemy ship on the screen will freeze and turn into an outline. This signifies that they are vulnerable to attack. This is your time to take down as many ships as possible on your way to the nearest coin. The power up only lasts a few seconds, though. Maneuvering your ship will sometimes take that long just to get across the screen.

This is one of those super hard games that drives a person to madness and causes an inexplicable desire to get just one more point no matter how long it takes. I played the game for more than an hour straight and my best score was four coins. I wonder what happens when you actually get 15 of them?

As I noted above, I was able to play this game for an hour straight without getting bored. The extreme challenge on easy mode – There are three modes of difficulty. How much harder can it get? – is frustrating, but triggers something in my brain that makes me want to keep going. I mean, one more coin can’t be that hard, right?

Because it is so simple and somewhat impossible, this is like a snack game. You can play it for a few minutes on your break without feeling like you need to sit down and focus. Chances are, you’ll die within 10 seconds anyway.

I’d like to see some kind of countdown ticker to let you know how much time you have before the power up runs out. Although, I guess that would make the game easier, which would defeat the point.

15 Coins is on sale for half off at $0.99. For one dollar, this is a great game to throw some change at. It will keep you interested for any length of time without boring you. When the price doubles to $1.99, I’d say it is a bit steep for something so simple.

If you are into torturing yourself with games that are nearly impossible to play, this is going to melt your face off. I predict that Reddit users are going to start posting their scores of five or six coins within a matter of days. Who will be the first to reach 15? This game is available on the iPhone, iPad, and iPod touch. Download it in the App Store today.

What do you think of 15 Coins? Is it your Flappy Bird replacement?