For those unfamiliar with Origin (formerly EA Download Manager), it’s a digital distribution software that lets players purchase DRM-enabled games for desktop and mobile and download them to their system using the Origin client.

Origin for Mac has been available since February of last year and now the Origin game store will be entirely digital downloads for PC and Mac, the publisher announced…

EA notes in a blog post that the vast majority of Origin customers consistently choose digital over physical delivery, adding:

If you’re that 1 percent who still desires a physical collection, we want to let you know that Origin won’t be able to fulfill that need beginning April 4th.

We’ll still be here when you transition your gaming habits to the wonders of digital downloads.

It was about the time, I’d say. I bet most of you were unaware of the fact that Origin was also selling physical copies of games. 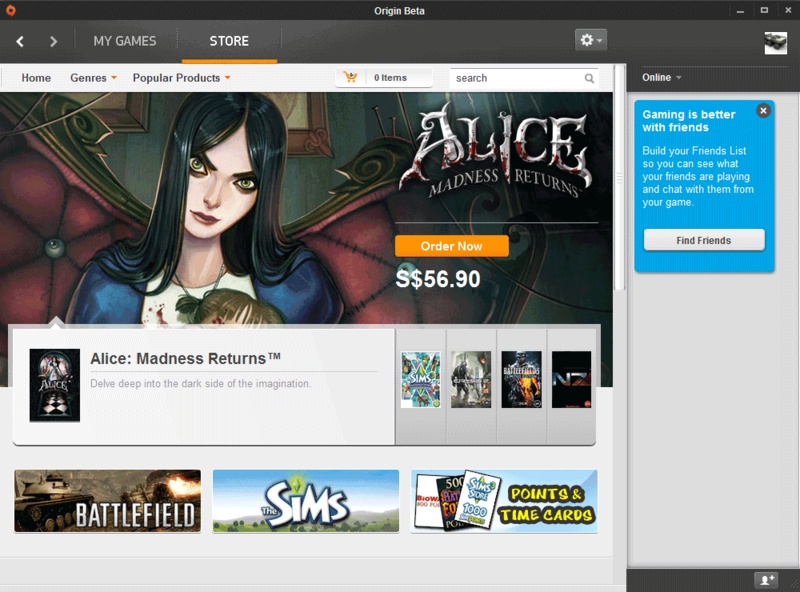 The Origin client on desktop.

The announcement marks a new chapter for EA, not only because the world’s top publisher is fully embracing the concept of digital downloads but taking into account the convenience of buying the latest games digitally and have them downloaded to a computer without having to fiddle with optical discs.

EA acknowledges as much. “Digital is fast and convenient,” reads the post, noting that going all-digital will ensure best experiences for its users.

EA has been one of the last remaining holdouts in terms of the digital-only distribution model that Apple helped mainstream with its App Store since its inception in 2008.

It remains to be seen whether EA’s way overdue decision can help it establish itself as a rival to Valve’s Steam distribution system or OnLive’s new CloudLift games streaming service.

@SimsVIP just to clarify, we’re still putting out boxed versions of our games, just not through Origin.

EA has not said whether the move could eventually pave the way for cheaper games on Origin, but I’m not holding my breath for that. Titanfall is a good example: Origin is selling that game as a $59.99 digital download, but that’s actually a higher price tag than a boxed copy from several retailers.

I’m also curious as to whether this decision will impact EA’s stance on Mac App Store distribution. For the time being, EA offers a mere four titles on Apple’s store: Real Racing 2, Monopoly, NBA Jam and The Game of Life.

If you want to purchase, say The Sims or some other popular EA game for your Mac, you’re required to use the Origin software and accept certain limitations stemming from the digital-rights management system used to protect each download from copying and unauthorized use.

Have you bought digital downloads from EA’s Origin for your Mac?

If so, tell us about your experience down in the comments.