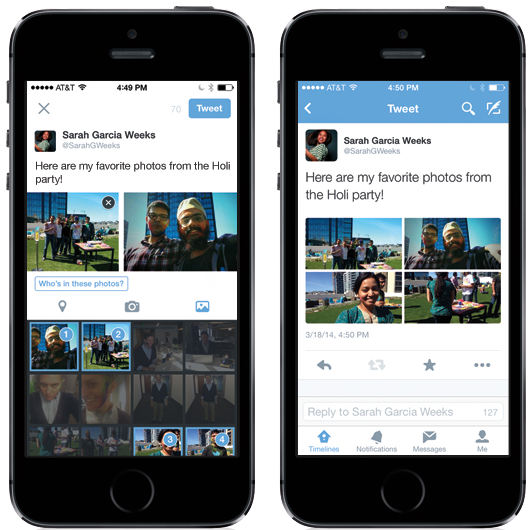 Following a minor update earlier this morning which added enhancements to sharing and uploading photos in its free iPhone and iPad app, the popular micro-blogging service Twitter has just announced a pair of new features that will be making their way to mobile apps.

The first one is the ability to tag people in tweeted out photos, similar to Facebook and other services, and the other lets you attach and share up to four photos in a single tweet. More on both right after the break…

You just select up to four images from the tweet composer and attach them to a tweet. Thumbnails of the chosen photos will appear right in Twitter’s composer.

There, you can tap an image to see it full screen and swipe to see the rest, as depicted top of post. Needless to say, the tweet’s character count gets automatically updated to include the pic.twitter.com URL for your image(s).

As for the other feature, you can tag up to ten people in a single photo by tapping the Who’s in this photo? button – and without ever hitting the 140-character limit as tagging doesn’t affect character count in the tweet.

Tagging works by either typing a person’s full name or just their @username. Unlike mentions that can appear in any type of tweet, tags only appear on photos in tweets. Keep in mind you can’t remove tags from a photo once it is tweeted out.

“To remove a tag, tap the tag and then the backspace or delete button,” writes Twitter in a help document. “You can only do this before you tweet the photo.”

Twitter underscores you should allow up to 30 minutes for changes to your photo tagging settings to take place.

Should someone tag you in their photo, Twitter will immediately issue a notification to your device.

“Tweets with photos you’re tagged in will be listed under Notifications in the Interactions tab,” explains Twitter. “If you follow the person who has tagged you, the tweet also be visible in your timeline.”

Those concerned about privacy can always set who can tag them using the app’s settings interface, here’s how. First, visit your Security and Privacy settings tab, either in Twitter’s web interface or via Settings in Twitter’s iOS or Android app.

People who have protected their tweets can still tag anyone who follows them though others, by default, can’t  tag them in a photo.

If you block a user, all tags on their photos become invisible. To remove your tag from a photo, tap into the detail view of the tweet, hit the ellipsis sign (•••) and select Remove tag from photo.

The ability to upload multiple photos is starting to roll out today on the iPhone, Twitter said, and is coming soon to Android and twitter.com. To take advantage of the new features, download the latest Twitter for iOS 6.3, which was released earlier today.

Will you be using this feature?