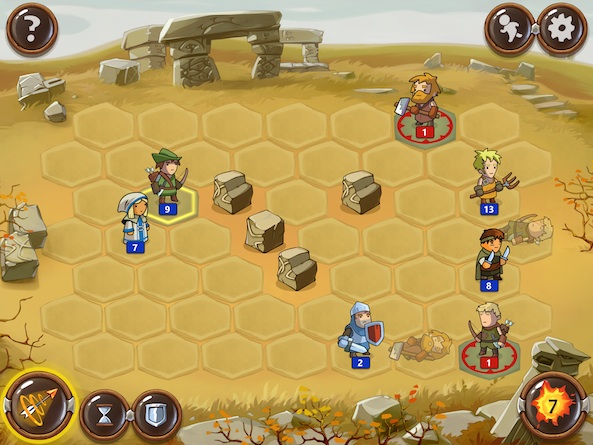 I recently watched an adventure movie from 2008 called “In the Name of the King.” It told the story of a farmer who didn’t want to get involved in any kind of battle, but found himself fighting against an enemy who invaded his land, burned his village, and destroyed his way of life (I don’t recommend it).

Braveland reminds me of that movie, only with better dialogue, more exciting battles, and a more interesting storyline (sorry to fans of the movie). It is also a turn-based strategy game with elements of board game mechanics, which is right up my alley…

If I had to compare the art style of this game to anyone, I’d say its designer must have been a fan of Mike Mignola. It is not that there are dramatically detailed sketches of Lovecraft mythos. But these little square-jawed warriors look like they could have stepped out of the pages of a Tiny Toons version of Mignola’s comics.

The battlefield features a series of hexagonal spaces with a handful of rocks or other items. Your fighters are on the left side and your enemies are on the right. The number of fighters and enemies depend on your progress in the game. Each group of fighters are represented with only one character. A number below the character shows how many fighters you have in that unit.

The player’s amulet ability is displayed in the lower right corner. When you receive damage, it is shown in the amulet’s display. Tap the button to see how much damage is needed to trigger the amulet. For example, in order to activate the Fire Arrow, a player needs to receive eight points of damage.

When not in battle, players follow a path to unfold the story of a young man whose village has been raided by a group of bandits. Along his travels, he meets new fighters who’ve been affected by the robbers and want to join his group. Each battle starts with some portion of story that explains who the bandits are and why they are ransacking the land. New paths open up when you successfully win a battle. 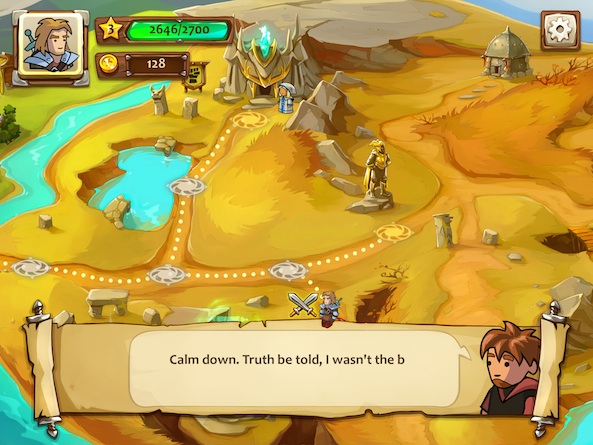 Players first learn about the plight of a warrior’s son whose village was attacked by a group of bandits. The young man takes off on a journey to find the robbers, get back his village’s food, and takes revenge on his enemies.

As the hero follows along the path, he will meet others on the road. Some will be friendly and offer additional help by joining the adventure. Others will offer weapons and armor that your hero can purchase to improve his stats. There are also enemies along the path that players must battle against in order to get closer to getting back the hero’s village’s lost food.

When you come face to face with an enemy, the battle will begin. Your units will appear on a battlefield on the left side of the screen. At first, you will only have one or two other units to help your fight. However, as you travel, you will meet more adventurers who will join the battle. Plus, you will be able to hire archers, healers, knights, rogues, and more.

Once your group kills off every enemy on the board, you will earn your winnings. If you lost any fighters during battle, you will have to pay for their recovery.

For example, if you lost two rogues and an archer, you might have to pay eight coins each to revive them. The total cost would be 24 coins, but you may have won 500 coins from your battle. So, you’d only get 476 coins instead of the full 500.

The fight is based on your and your enemy’s stats. If you have more armor than your enemy, you will have a better chance to survive his fireball. If you have a high attack stat, you might kill more than one enemy in a unit at one time. If you are not successful at beating a difficult level, go earn more experience and level up your units and replay the stage you couldn’t beat. 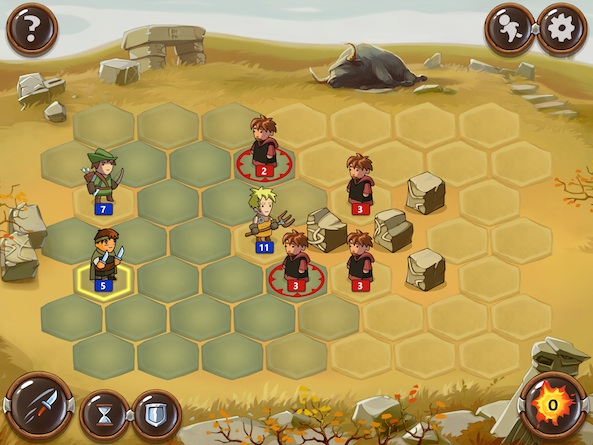 This is a fairly easy game to play. You don’t have to work very hard to get far. It is a good game for beginners to the turn-based strategy game genre. That being said, you can also change the difficulty level if you find the game to be too easy.

After about 10 levels, the game feels a bit repetitive. The story fills the holes, but the battles don’t vary much in look or action.

Braveland costs $2.99, which is just about right for this game. There are no in-app purchases and the game features a wide variety of warriors, enemies, and bosses to beat. The replay value is very low because you can’t replay a level you’ve already beaten.

As a game for beginners to the genre, I’d say it is a great starter. You can learn about increasing armor and attack, activating special abilities, and earning experience points. If the game seems too easy, increase the difficulty level for a more active game. At only $2.99, you won’t spend much to have a few hours of fun. This game is available on the iPhone, iPad, and iPod touch. Download it in the App Store today.

What do you think of Braveland?