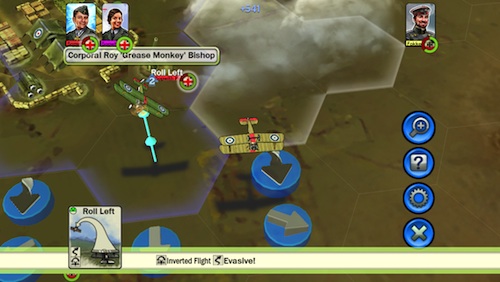 Because the strategy-based games that Meier puts his name on are well made, exciting, and interesting, you can almost guarantee that you won’t be disappointed by any new titles with the nomenclature.

Sid Meier’s Ace Patrol is a turn-based strategy game set in World War I. Players command a team of ace pilots as they try to take down enemy forces. This is the first game from Meier that is exclusive to iOS and it is definitely worthy of the man’s name…

Players move around on a virtual board game that uses hexagonal spaces to denote possible movements. You are presented with possible options in the form of blue or green arrows that are positioned in different ways. For example, one blue arrow might be tilted downward and slightly to the left. This means that, if you choose that arrow, the plane will bank left and lose altitude on its turn.

When you are planning your movement, you will see the space markers, as well as areas that represent enemy territory. You will see the enemy’s planes and be able to tell how far away they are and at what angle.

When you have chosen the movement option for your plane, it will turn into a cinematographic representation of your turn. For example, if you chose to bank to the right and fire on the enemy, you will see your plane turn right and attack the enemy’s plane. Depending on the damage done, you may see the plane explode or go down in flames.

To view different areas of the game board, drag your finger around on the screen. To get a close-up of the action, pinch to zoom. You can also pull out to view a larger area of the board by reverse pinching. You can adjust the angle of the view by sliding two fingers up or down. 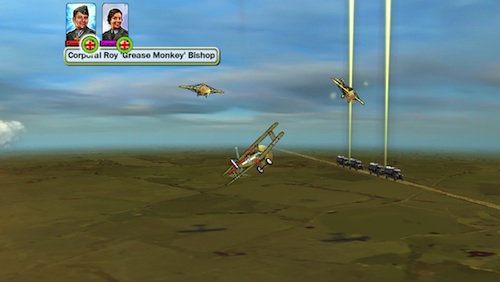 Players start by choosing a squadron leader from four pilots. Each pilot offers different abilities. For example, one pilot can perform loops while another is an expert at dive-bombing.

After picking a leader, you will be taking on a tutorial of the game. Here, you will learn how to maneuver the plane based on movements available on your turn. The leader will gain experience points for the tutorial and you’ll be able to upgrade the pilot’s abilities.

On your turn, you will pick a movement option from the arrows that are displayed on the grid. You can fly upward in order to get into the ideal position for a dive bomb, or roll to the left in order to avoid an incoming attack. After you move, your opponent takes a turn.

After the tutorial is over, you will be able to choose a mission. Each mission has a goal. When you’ve completed the task, the mission will end. You will earn points for damage to other planes, but you will also lose points for taking damage.

There are 24 missions across four campaigns that are included with the free game. You can purchase additional campaigns for $1.99 each, or unlock three missions for $3.99.

For the most part, this free game does not push in-app purchases on you. However, if one of your plane goes down over enemy territory, the pilot will become a prisoner of war that you can’t get back until you have successfully completed the mission. If you want to get your pilot back immediately, you can purchase an improvement, like Field Hospital or Ambulance Corps for $0.99. There is also no way of healing injured pilots during a mission without purchasing one of the improvements.

There is a multiplayer mode that is supported by Game Center. However, the game launched without a necessary update that allows for multiplayer mode. When it finally does become available, this will be an important feature. Turn-based strategy games work best against other real-life players. 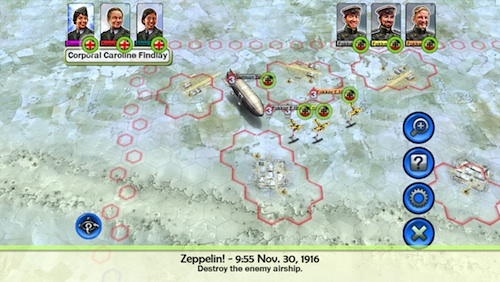 This app is lots of fun for fans of turn-based strategy games. It uses touch mechanics to move the plane around in realistic ways. You can improve a pilot’s abilities so that they can perform rolls, loops, and dive bombs. Even though in-app purchases are required in order to play all 120 missions and there is not way to heal a pilot without buying medical aid, you are not overwhelmed with in-game currency. You won’t have to buy baskets of gems over and over again in order to get anything done.

Unfortunately, the game launched without multiplayer support. Turn-based games work best with real-life opponents. Without multiplayer mode, it is basically like playing chess against a computer opponent. It is good for practice, but you really want to use your skills on a real person.

The free part of the game includes four campaigns with six missions each. Once multiplayer mode is fixed, you will be able to play against others as many times as you like. If you want to complete all missions, it will only cost a total of $4.99. You will probably want to unlock at least one medical aid improvement for $0.99. So, for about five bucks, you can play a Sid Meier strategy game. That is just about right for iOS games with the Meier stamp of approval.

If you are a fan of turn-based strategy games, you should definitely download this for free. You will know within the first half-hour of gameplay whether you want to invest money in additional campaigns. Think of Ace Patrol as another version of Civilization, but based in WWI and with dogfights instead of ground battles. Download it for free on iPhone and iPad in the App Store today. Please note that this game is not available for the iPod touch.