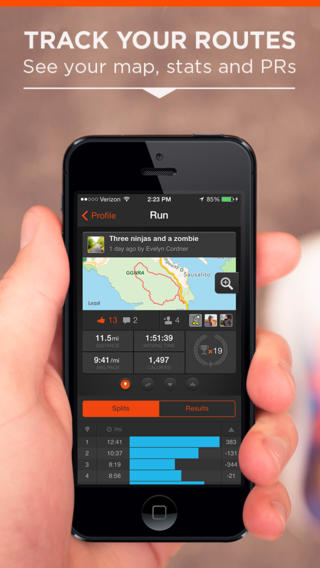 Strava Cycling, a biking and cycling tracking app that keeps tabs on your rides and analyzes your performances, has been rechristened Friday to reflect its expanded tracking capabilities. The software shall be known henceforth as Strava Running and Cycling for it can now track your runs, too.

I guess rebranding signals that the existing Strava Run is next on the chopping block. The name change is already reflected in the latest version 4.0 update, now available in the App Store. They have a new icon, too, and of course a set of new features dedicated to tracking your rides…

You can tell Strava Running and Cycling which shoes or bike you’re using for each activity to “stay on top of mileage and wear on your gear.”

Next, the team has introduced the new Real-time Segment feature with live audio announcements informing you of key milestones, like starting a segment or when you’re at the halfway mark.

Developers have doubled down on Strava’s social capabilities so there’s now a brand new Activity Feed for people who love to brag about their achievements.

You will now be able to see more about your friends’ activities, including their Instagram photos and route map. We’ve also made it easier to give kudos and comments right from the Activity Feed.

Strava back in January announced integration with Instagram and today delivered on the promise. Now when you connect to the Facebook-owned photo-sharing service from Strava’s Social Connections section under the Settings page, you’ll be able to share photos from your activities on your profile.

Download Running and Cycling free in the App Store.

You may also want to check out iDownloadBlog’s top apps for cycling, as well as for health and fitness.

What are your favorite apps to log those runs and rides?