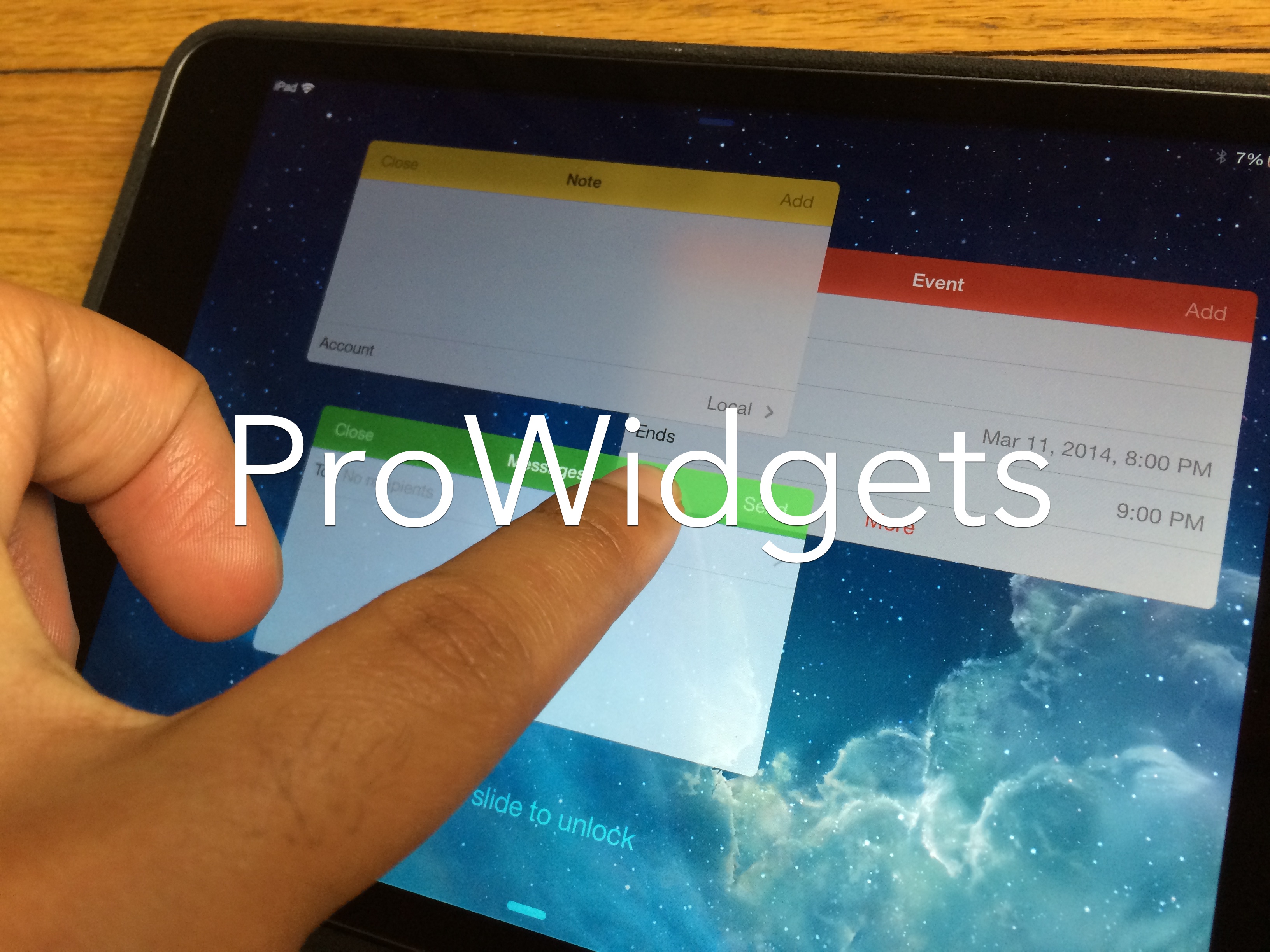 Cydia has been the originating point for lots of groundbreaking ideas over the years. Copy and paste originated here, card-based app switchers began here as well. And let’s not forget Notification Center and Control Center — each had its roots firmly planted in Cydia before debuting in stock iOS.

It goes without saying that Apple has been keen on seeing many of the developments unfold by some of the brilliant minds that make up the jailbreak community. It’s even hired ones because of the work they’ve done with jailbreak apps and tweaks, and iOS hacking in general.

Today, we’re happy to reveal the next big blockbuster tweak for jailbroken iPhones and iPads. Hopefully, it will help generate ideas for Apple’s next big feature in iOS. Today, we’d like to introduce to you a brand new upcoming tweak called ProWidgets. We’ve got the very first exclusive hands-on coverage of ProWidgets, and we think you’ll agree with us when we say it’s one of the best looking jailbreak tweaks we’ve seen in some time…

Developed by well-known and respected developer Alan Yip, ProWidgets is a jailbreak tweak that brings interactive widgets to the iPhone and iPad. ProWidgets allows users to multitask to some degree on the small screen of the iPhone, and to an even larger degree on the generous real estate possessed by the iPad.

But ProWidgets goes much deeper than that. Developers can take advantage of an API to create their own widgets with JavaScript. Or, if you’re feeling particularly adventurous, widgets and scripts can be built using Objective-C.

There will be several ways to add new widgets to ProWidgets. You can do so via direct URL, and there’s a strong possibility that an add-on store will be available for adding new widgets as well.

The list view in iOS 7.1 makes its way to the Calendar widget in ProWidgets

ProWidgets really grabbed my attention when I was able to go hands-on with its widget manipulation features for the first time. Users can move, minimize, maximize, and open multiple widgets on screen at once. You can then interact with each widget, and each contains its own personality and feature-set. 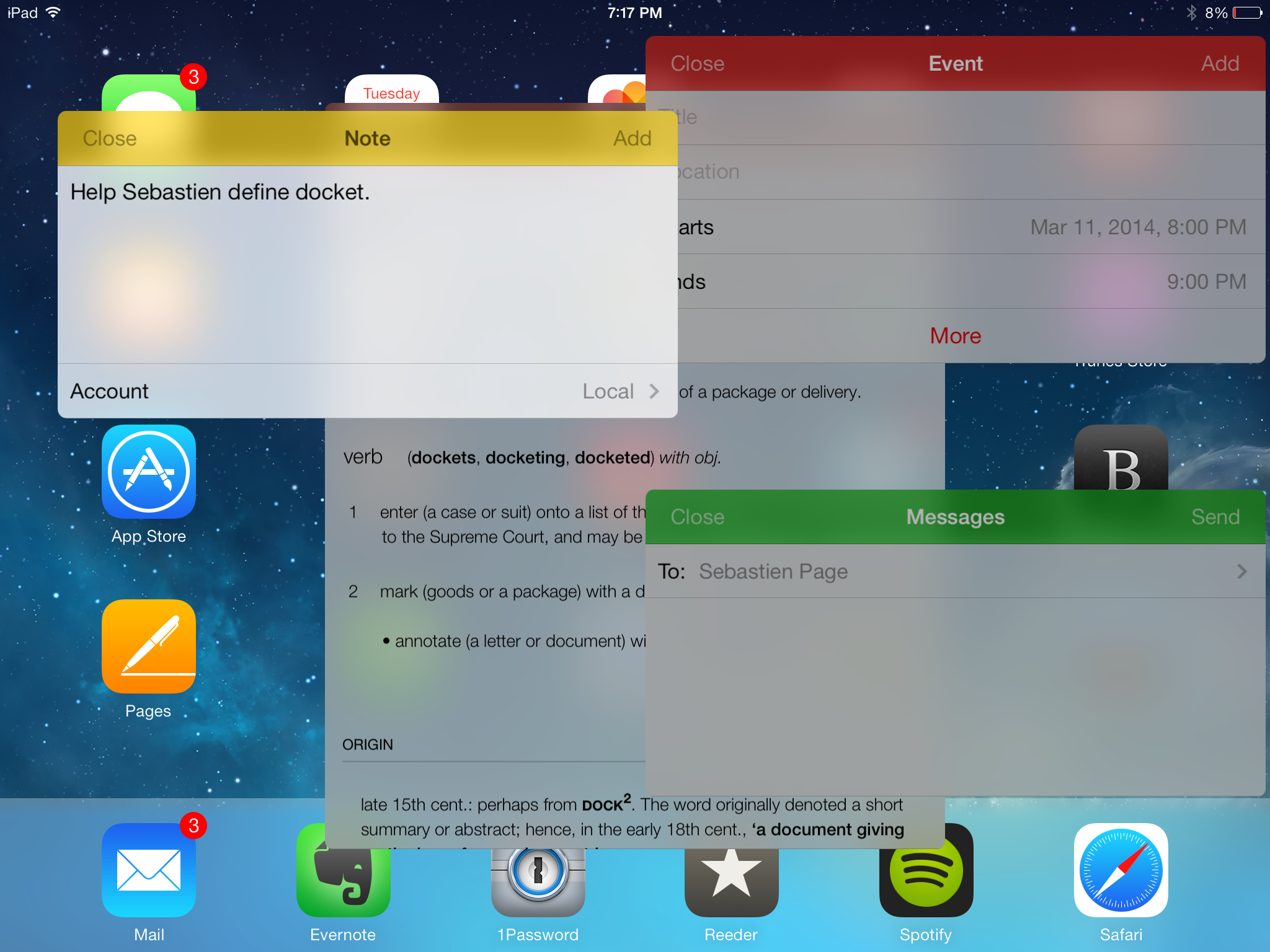 There are several ways to activate the widgets found within ProWidgets. The easiest way is to assign an Activator gesture to the widget of your choice. You can also use Control Center QuickLaunch shortcuts, or take advantage of buttons contained within the Notification Center overlay or Lock screen.

The one thing to keep in mind is that every widget is easily accessible from virtually anywhere. You can even open a widget while within an app, and continue to manipulate the app in the background while your minimized widgets reside in the foreground. ProWidgets is essentially allowing you to multitask on the iPhone’s smaller screen in a manner that makes sense for its size.

The larger iPad screen benefits by allowing you to move maximized widgets around the screen, interacting with multiple maximized widgets at once. While the iPad version of ProWidgets certainly feels amazing, I want to make sure that I accurately portray how awesome this tweak is, even on the iPhone’s smaller screen.

There are so many features, subtleties and nuances involved with this tweak, that I could go on for the next few hundred words talking about them all. The bottom line is that ProWidgets looks to be a runaway jailbreak hit for 2014, and I’m wholeheartedly convinced that after it debuts, it will be remembered as one of the best jailbreak releases to ever hit Cydia, hands-down. 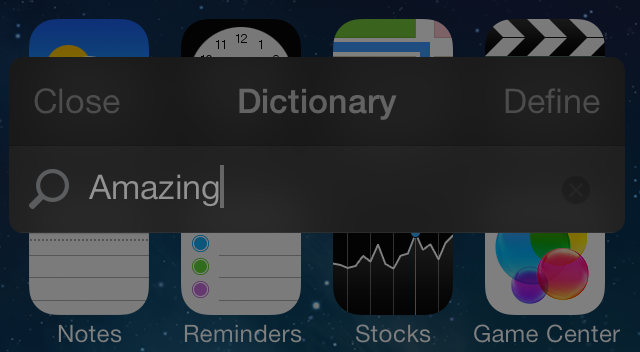 Again, there are many more features to talk about, including built in themes—there are four of them—and the ability to set the minimization view size for minimized widgets—there are four of those as well. I won’t spoil all of the surprises in this preview, but rest assured that you’re going to love this when it lands on Cydia. 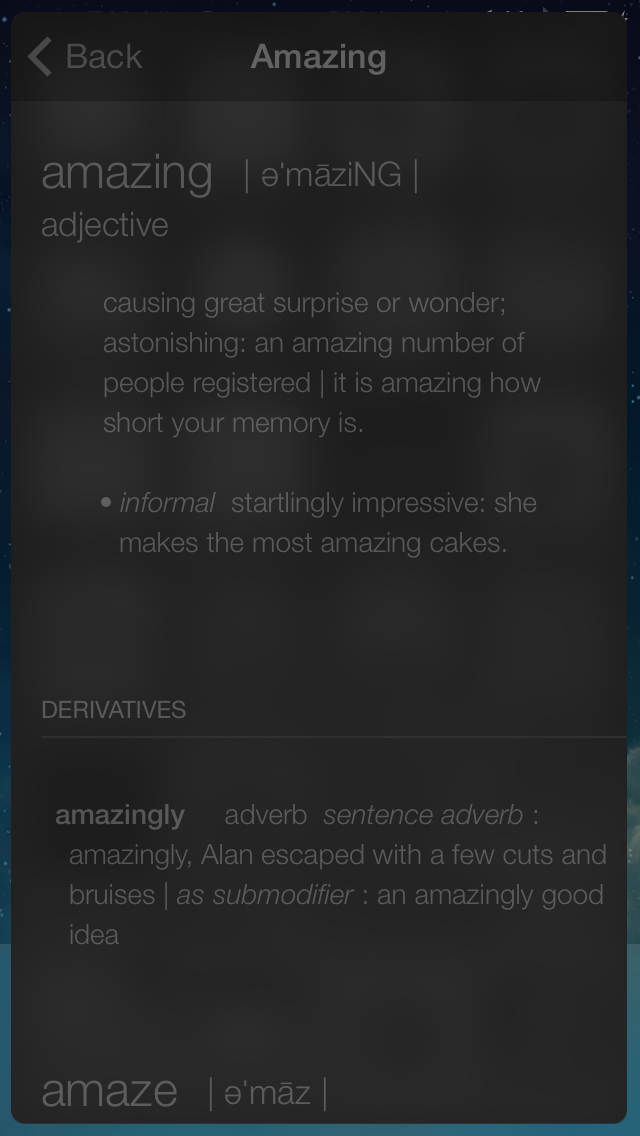 There’s no current ETA for ProWidgets’ release, but I don’t think Alan is keen on releasing the tweak until he’s 100% satisfied with its results, and I don’t blame him. Regardless of how long it may take (I don’t believe it will be that much longer), I think you’ll feel that it was worth the wait.

So what do you think? I told you guys that there was something big on the horizon, and I don’t think my claims were unwarranted in any way. Share your thoughts down below in the comments section, and let me know what type of widgets you’d like to see, and whether or not you’ll be buying this tweak come release day. Stay tuned, we’ll have more exclusive coverage of ProWidgets in the near future. In the meantime, you can find out more about ProWidgets by visiting its official website.