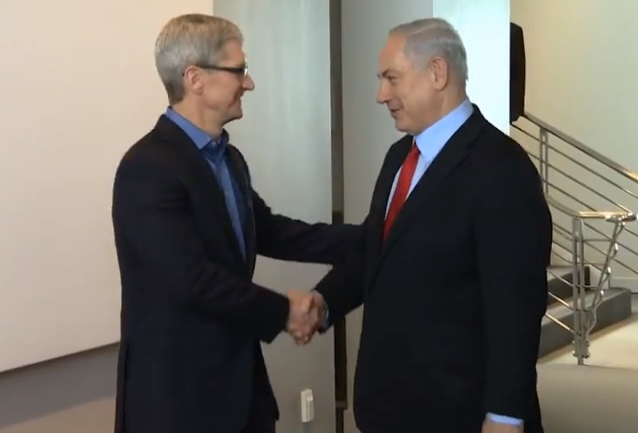 Earlier this week we noted that Israeli Prime Minister Benjamin Netanyahu would be touring the United States for a few days, and that one of his planned stops in the country would be at Apple’s Cupertino, CA campus for a luncheon with Tim Cook.

Well that meeting took place on Wednesday, as evidenced by a newly uploaded video clip. It’s not known exactly what the pair discussed, but the video itself is rather interesting as it offers a brief look inside the walls of Apple’s usually-secret headquarters…

The building the video appears to be shot in is called the Executive Briefing Center, and while most of it looks pretty standard, I found the conference/meeting room at the end intriguing. Who are all of those people in there, and what did they talk about?

Apple doesn’t have much of an official presence in Israel, but the two still cross paths often. Apple has purchased at least two [that we know of] Israeli companies: PrimeSense and Anobit, and it operates 3 research and development centers in the country.