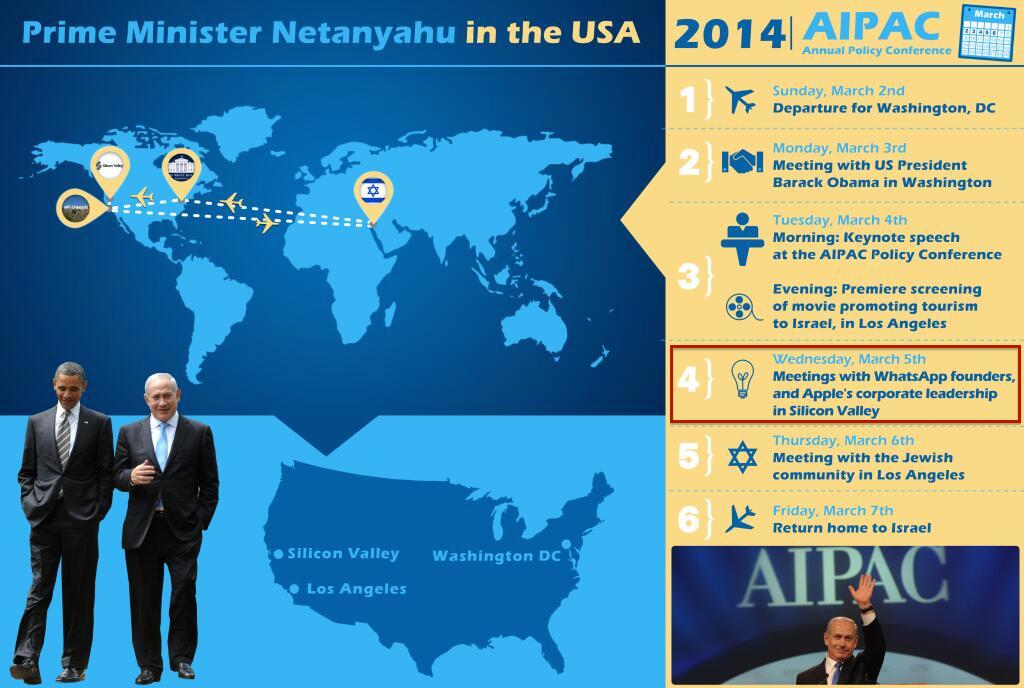 Israeli Prime Minister Benjamin Netanyahu, currently touring the United States this week for the American Israel Public Affairs Committee (AIPAC) annual conference, is planning a swing through the Silicon Valley, the first California visit from an Israeli prime minister since 2006.

He’s scheduled to have lunch with Apple CEO Tim Cook later today and will meet with WhatsApp co-founder Jan Koum, a Jewish Ukrainian immigrant who made a fortune by selling his startup to Facebook for $19 billion last month…

Following his lunch with with Cook, Netanyahu will head to Stanford where he will meet President Hennessy and do some national TV interviews.

Netanyahu will also sign an agreement with California Governer Jerry Brown which will enable Israeli companies to tap resources of the California Innovation Network (CIN).

The CIN is comprised of sixteen iHub business incubators located around the state and the agreement is mutually beneficial as iHub members get to benefit, too, should any new interesting technology come out of Israel.

The California Israel Chamber of Commerce already co-operates with tech titans like Facebook, Microsoft, PayPay, eBay, Oracle and others. It’s worth pointing out that more than 150 Israeli-based startups are now located in Silicon Valley.

Netanyahu said his country has “a huge concentration of engineers.”

“And from what I gather, they’re crazy over there just like we’re crazy over here, working all hours of the day, going killer on startups and project ideas,” he remarked.

In 2012, the iPhone maker opened a second Israeli development center in the town of Haifa, in addition to its previous R&D facility in the country. Last year, a third R&D facility went online in Israel, staffed with 150+ former Texas Instruments semiconductor engineers who are working alongside Apple’s wireless and semiconductor teams in California on new chip designs.

And of course, July 2012 brought another acqui-hire as Apple snapped up a company called AuthenTec for $356 million. AuthenTec was the world’s top supplier of smart sensors and its talented engineers moved to California to help develop the iPhone 5s’s Touch ID fingerprint reader.

Fruits of that partnership have yet to materialize.

For what it’s worth, pundits speculate that the PrimeSense deal is an indication of some sort of gesture-based Apple TV interface because PrimeSense tech, chips and designs power the original Microsoft Kinect motion sensor for the Xbox 360.

Yet another possibility: folks who joined Apple from PrimeSense are said to work on camera hardware for future iOS devices and TV products, according to sources briefed on Apple’s plans who talked to 9to5Mac‘s Mark Gurman.