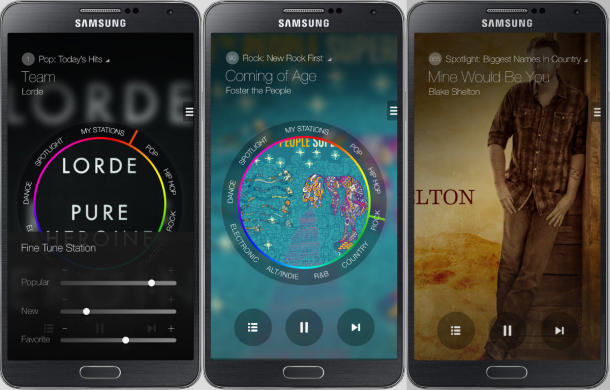 In a somewhat surprising move, Samsung announced today a new streaming radio service dubbed ‘Milk Music.’ The service is a lot like Apple’s iTunes Radio in that music is chosen based on a user’s preferences, and it’s platform-specific—it’s only available to Galaxy device owners.

The service is powered by Slacker Radio, which would explain the absence of rumors that Samsung was working on such a project, and there are no ads. As for the app, it offers the usual features including the ability to save songs for offline listening and create custom radio stations…

CNET has some comments from Samsung’s Daren Tsui on the new service:

“Milk, at least for now, is only for Samsung Galaxy customers. And for now it’s only available in the US, which was how Apple rolled out iTunes Radio too. “Knowing Samsung, the chances are very high” it will be expanded internationally, said Daren Tsui, vice president of music for Samsung’s Media Solutions Center America.

The company isn’t certain if Milk will be preloaded on its devices yet, and Tsui said Samsung is even open to expanding the service to other platforms. “It comes down to whether it’s a hit or not,” he said. But with no ads and no sales for Samsung to enjoy through Milk for now, it’s hard to think of a reason why Samsung would make it available to all.”

Samsung says that Milk Music has over 200 genre stations, and a library of over 13 million songs. That’s a sizable selection, but not nearly as big as the 20+ million songs other services offer. It also features a ‘Spotlight’ section, which plays curated tracks from tastemakers and influencers.

While Samsung’s music service is limited to Galaxy users in the US right now, it still aims to compete with heavy competition. Companies like Pandora, Spotify and Rdio already have large user bases, and Amazon is said to be working on its own streaming radio service for Prime subscribers.

It’ll be interesting to see how this plays out. If you’re a Galaxy device owner, you can find Milk Music in the Google Play store for free.