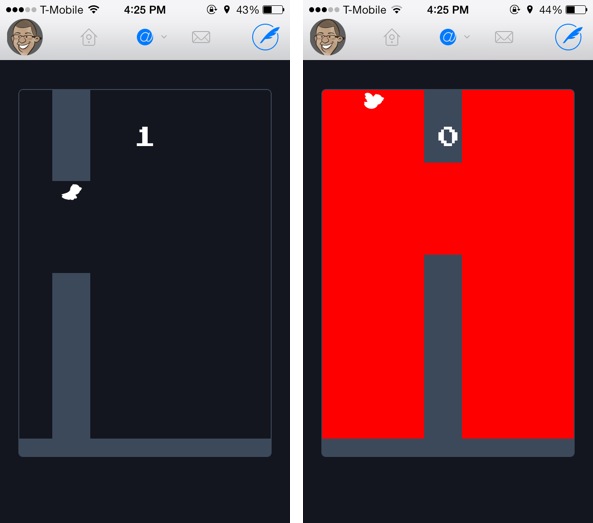 The Flappy Bird drama has slowly begun to dwindle down, but there are still artifacts left over from the game’s immense popularity. For example, The IconFactory—creators of the highly regarded Twitter client Twitterrific 5—have planted a Flappy Bird inspired Easter egg inside its iPhone Twitter client called Ollie Soars.

Inside, we’ll show you how to access Ollie Soars by means of an easy to use gesture. The app even lends the ability to tweet your high score after you die. And die you will; I’ve found Ollie Soars to be significantly more difficult than Flappy Bird ever was. Check inside for the video.

Ollie, the Twitterrific mascot gets his own video game when you continuously pull down the interface pane normally meant for refreshing your Twitter stream. If you pull the pane down far enough without letting go, Ollie will be whisked away to his own version of Flappy Bird, sound effects and all.

The physics of Ollie Soars are much different than FlappyBird. I guess I’d describe the physics as being more “realistic” which presents a different challenge altogether when compared to the game that inspired it. My high score is 8, which is pretty pathetic, but see if you can beat my score and post it down below.

If you want to play Ollie Soars, then fire up your copy of Twitterrific 5, and follow the instructions outlined in the video. If you don’t yet own Twitterrific 5, you can purchase a copy on the App Store for $2.99. The good news is that even if you end up hating Ollie Soars, Twitterrific 5 is a solid Twitter app and one of the best ones available for the iPhone.

Hat tip to @reallyandy for the heads up.