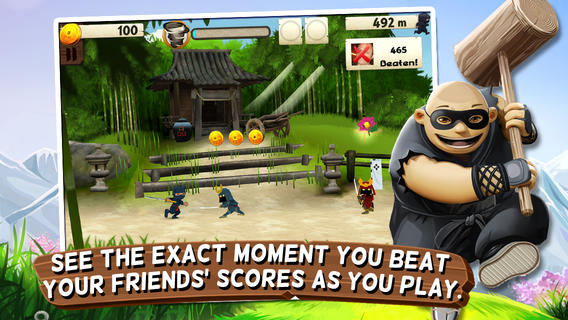 Apple has named Square Enix’s ‘Mini Ninjas’ game its App of the Week for this week. This means that through next Thursday, you’ll be able to pick up the application for both your iPhone and iPad, for free—a nice little savings of $1.

For those unfamiliar with the game, it’s an endless runner based on the console game of the same name. In it you’ll play as Hiro, as you run jump and slash your way through various levels to retrieve a stolen artifact from the drag…
From the App Store description:

Join Hiro and his Mini Ninja friends as they run, jump and slash their way through amazing spellbound lands to retrieve the stolen artefact from the dragon. Do battle with the Evil Samurai Warlord’s magical army and look out for the Flying Samurai Monks.

Invite and challenge your friends on Facebook. Check out new scores in the High Score table and see the exact moment you beat your friends’ scores as you play.

And some of the game’s features:

And finally here’s your promo video:

The game comes highly reviewed, with 4+ stars in the App Store on over 1000 ratings. I’ve found it to be fun and entertaining in my brief time with it, but I will say that it does push IAPs so I’m not sure how that will affect game progress.

At any rate, if you want to check out the game for yourself, you can find it in the App Store for free. Also remember that the Apple Store app is offering Tetris for free right now, and Sky Gamblers: Storm Raiders is IGN’s Game of the Month.