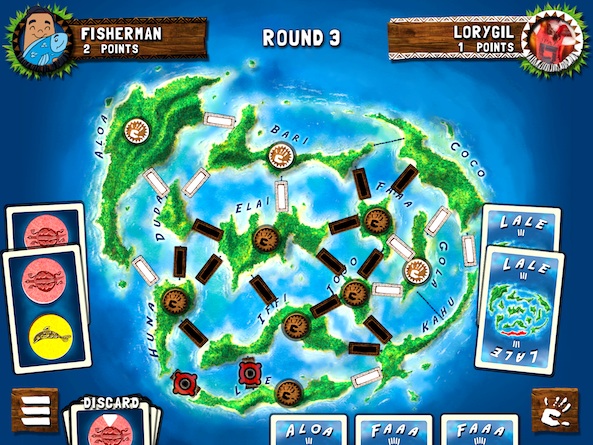 This whole “board games ported to iOS” thing is a huge money saver for me. My favorite types of games average $40 and can cost upwards of $80, not taking into account expansions. So, whenever there is version ported to the iPad, I jump at the chance to play it. If it’s one I’ve never heard of, it gives me the opportunity to see if I like the mechanics before dropping a few “twomps” on the physical version (which I usually do).

Kahuna is a port of the land grab strategy game of the same name by Rio Grande Games. This is one of those titles I’ve seen at my local board game store, but had not invested in yet because I wasn’t sure if I’d like it. Guess I’ll be heading to the game shop this week…

Just like the physical game, the board consists of 12 islands with dotted lines connecting them in various places. There is a deck of cards with names of the islands on them at the bottom of the screen. In addition to the draw deck, there is a discard deck and three cards, lying face-up. Depending on which game you play, your hand will be on the right or left side of the screen (in single-player mode, it is on the right side and in multiplayer, it is on the left side). Your name and your opponent’s name are displayed at the top of the screen representing the side you are on. There is a small handprint at the bottom right corner of the screen. This is the “end turn” button.

Off screen are the game tokens and bridges. When you play a card to place a bridge, it will appear automatically in the location you chose. When you control an island, your player token will appear on top of that island.

The game features a tropical island musical soundtrack to keep you in the mood. Your score between rounds and at the end of the game will be tallied for you, so you don’t have to keep track. 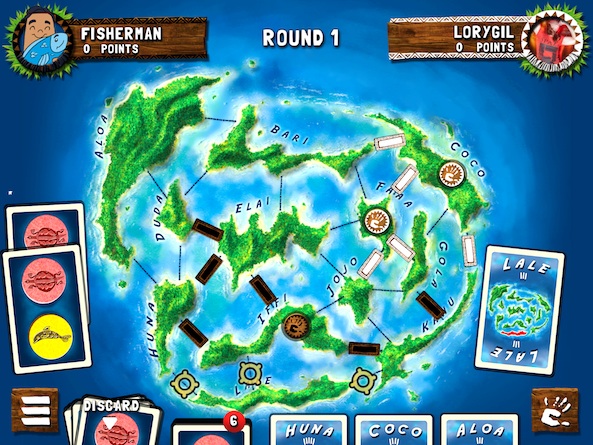 To begin, choose either single or multiplayer mode. In single-player mode, you will compete against different levels of computer-generated opponents. If you’ve never played the physical game, you may be a little confused with this app, since there is no visual aid to tell you what each item is on the screen. To make matters worse, there is no “undo” button if you mistakenly tap a card you didn’t mean to tap.

Think of your first game as a test run. You’ll learn what the cards and decks are for by experience, and then the next game can count as a real play.

The goal is to control as many islands as possible during each of the three rounds of play. To control an island, lay down enough bridges surrounding it to equal more than half of the bridge locations available. For example, Jojo has five bridge locations. To control Jojo, you must have at least three bridges leading from it to another nearby island. When you control an island, your game token will appear on top of it.

As bridges are placed, you can remove and opponent’s bridge if you capture control of an island it is connected to. For example, if your opponent has a bridge between Duda and Bari, you can remove it by controlling Duda.

You can also remove a bridge by placing two cards on one location. The two cards must be associated with the island and its connected land. For example, if you have two Huna cards, you can remove any of your opponent’s bridges that are connected to the island of Huna. You can also remove a specific bridge by playing a Huna card combined with a Lale card.

The game has three rounds. A round ends when all of the draw cards have been used. The number of islands each player has control of is counted and the player with the most islands wins that round. At the end of the third round, that number, plus the total from the previous two rounds is tallied to give you the final score.

For example, you may have controlled seven islands at the end of the third round, but it doesn’t mean you’ve won the game. If your opponent controlled more islands in the previous two rounds than you did, he or she will likely be the winner of the game.

From what I was able to gather from my multiple attempts to win a game, the key is to play offensively for the first round and then try to remove your opponent’s bridges during the final round. 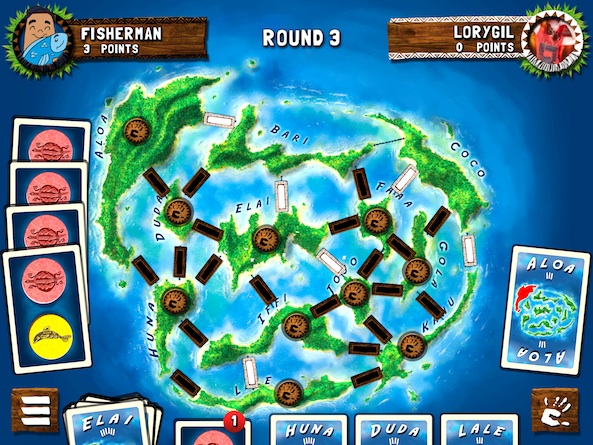 I thoroughly enjoyed the game’s overall play. I know I will be buying the physical version on my next trip to the board game store. The artwork is well representative of the original game. The relaxing island music makes me want to drink a Mai Tai while playing.

There are a couple of important features missing from this game. For example, there is no pass-and-play mode, so you can’t play the game with the person sitting next to you. You must connect through Game Center and play online.

Single-player mode does not save when you exit the game. Even if you are just switching to another app to check your email or something, the game will be lost. It does not save in the background.

Additionally, the artificial intelligence of the first computer-generated character is way too hard for beginners. I played seven games against the “Fisherman” and he beat me every single time. I got better, but he always won. The first opponent should not be so hard to compete against. Or, there should at least be an option to adjust the difficulty level of your AI opponents.

Kahuna is a very inexpensive board game at only $1.99. After the promotional launch is over, the game will go up to $2.99, which is still very reasonable for the genre. Board game apps traditionally range from $4.99 to $7.99, so two or three bucks is quite a bargain.

I have great confidence that the developers of this game will make changes to the game that will at least fix the non-savable single-player game. USM distributes Catan, Rivals for Catan, and other popular board game apps. If you’ve played Kahuna before, this is right up your alley. If you’ve never played before, you may struggle with the rules and how to score at first. However, it becomes clear after a few tries. If you like land grab games, this is one to add to the list. Just keep in mind the missing features before you buy. This game is available on the iPhone, iPad, and iPod touch. Download it in the App Store today.

Empires II is another land grab board game. A Brief History of the World lets you capture the entire globe.