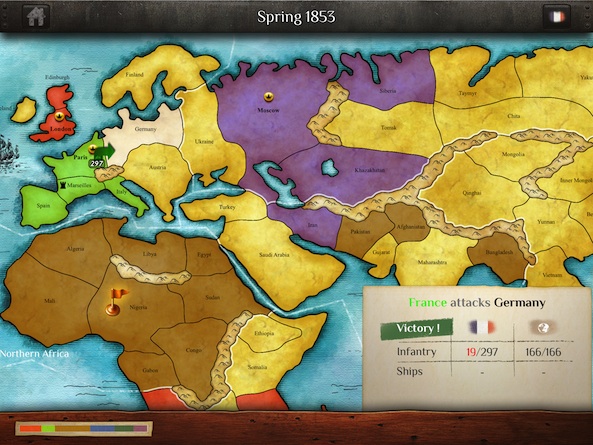 World domination empire building games normally have a list of rules that take longer to read than playing the game does. It is hard to find one that is simple, fun, and comes with a basic set of rules that most people could follow.

Empires II is a world domination game where your only goal is to capture all of the land. At the end of the game, you will either eliminate your enemies and control all territories, or be eliminated yourself…

This game is designed to look much like a board game. There are no markers, tokens, or other game pieces, but the map is flat and easy to see. As you conquer regions, the land will change colors to represent a player’s ownership. For example, if you are green, all land that you conquer will turn green. If an opponent is purple, land will turn purple when he or she wins an invasion.

All players’ influences are represented by a color bar at the bottom of the screen. The player with the most land will take up the most space on the bar. Smaller sections of color will represent the others.

The number of army units you have in a territory is displayed next to the name. If you have any ships in a territory, the amount will be listed next to the army number in black. If you move armies, the new territory will have a green number next to it to show how many you plan to move when you end your turn.

If you conquer an entire region, a flag will appear showing that one leader rules the whole section. 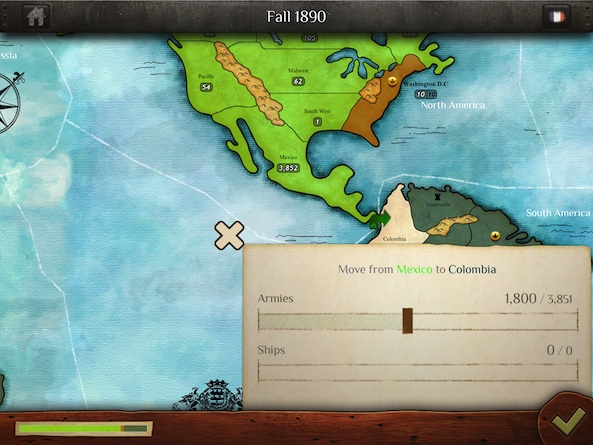 The goal of the game is to conquer everything. It doesn’t end until one player has achieved world domination. There are four seasons in each round of the game. The buying season is in spring. This is the first season of the game and the only way to begin your adventure. Buy as many armies and ships as possible. The money does not carry over to the next buying season, so you might as well spend it all. The more territories you own, the more money you earn from the land. If you manage to conquer an entire region, you’ll earn an additional bonus of $10,000 per region, per season. You can only purchase items in the capital cities that you own.

After you’ve purchased as many armies and ships as possible, you can move into summer. In the summer, fall, and winter seasons, you can only move units. This is where you strengthen your defenses, invade territories, and conquer regions.

To move armies and ships, tap the territory you want to move them from and then tap where you want to move them to. When you’ve selected two areas, a window will appear that will allow you to select how many you want to move. You can move a maximum that is equal to one less than the number of armies you have in a territory. For example, if you have 250 armies in Paris, you can move 249 of them into Marseilles. However, it may not be smart to leave a territory with such a small number of armies because the enemy can invade while you are low.

After you plan your movement around the world (you can move as many armies as you have on the board without limit), tap the end movement arrow at the bottom right of the screen. This will carry out your orders and the orders of your opponents. If you are invading an occupied country, you will see the battle results at the bottom of the screen. All other movement happens without incident.

If you are invading a territory, it is smart to send at least twice as many armies as your opponent has. For example, if you are invading Saudi Arabia and your opponent has 200 armies, send over 400 to ensure a victory. If a territory has been fortified, it is better to send over four times as many armies. Countries that are an opponent’s capital city are nearly impossible to conquer because they are usually populated with a large number of armies, plus they are fortified.

There are some basic orders of operation that should be reviewed in the help section so you can better strategize your attack. For example, attacks are resolved in a particular order with England going first, followed by France, then Japan, and so on. So, if you are playing Japan and want to invade Russia and your opponent is playing England and invades Russia during the same season, England will go first and then Japan will attack the winner of the first battle.

When a player eliminates an opponent by taking over all territories he owned, the winner also gets the funds left behind by his rival. The game goes on like this until one person has conquered the entire map.

The game can be played alone against computer-generated opponents, against others in pass-and-play style, against others online, or in a co-operative mode online through Game Center. 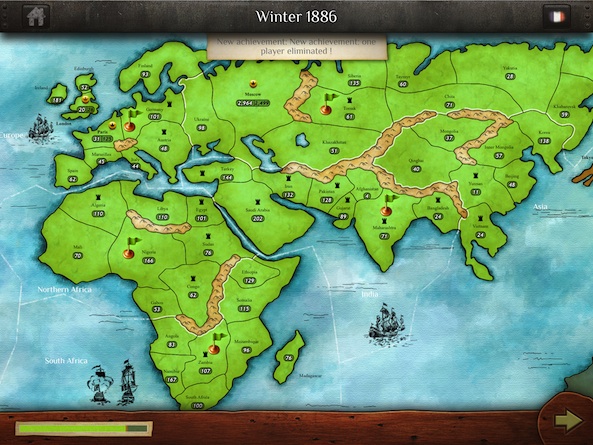 I love a good world domination board game and this one is very easy to play. There isn’t much strategy involved. Attack the enemy until you win. Build up the biggest armies you possibly can and invade territory after territory until you have conquered them all. It is a great game for people who are not well versed in the intricacies of more complex empire building board games.

Because the game does not end until one person rules the world, it takes forever to play against computer-generated opponents. Even in easy mode, I spent three hours playing one game. Just when I thought I was about to win, one of my opponents replenished his army and started attacking my territories. I still haven’t completed the game. We are almost even on territories now. It’s like a game of Monopoly that just never ends.

Empires II is only $1.99, which is a great value for a board game app. However, this is a simple version of a full board game, so it is a good thing it is so inexpensive. Believe me, for only two dollars, you are definitely getting your money’s worth.

If you are a fan of empire building board games, you may find this one to be a bit too easy. However, it is enjoyable for its simplicity. If there is such a thing as a casual domination game, this is it. If you have always wanted to try games that involve invading and conquering other countries, but are intimidated by the plethora of rules, try Empires II. It is very easy to pick up and play. The game is available for the iPhone, iPad, and iPod touch. Download it in the App Store today.

Empires II is not nearly as complex, but it is similar to A Brief History of the World. It is almost identical to Empires: World Conquest but looks better and is optimized for the iPad, which makes sense since it is the original game from the same developer.