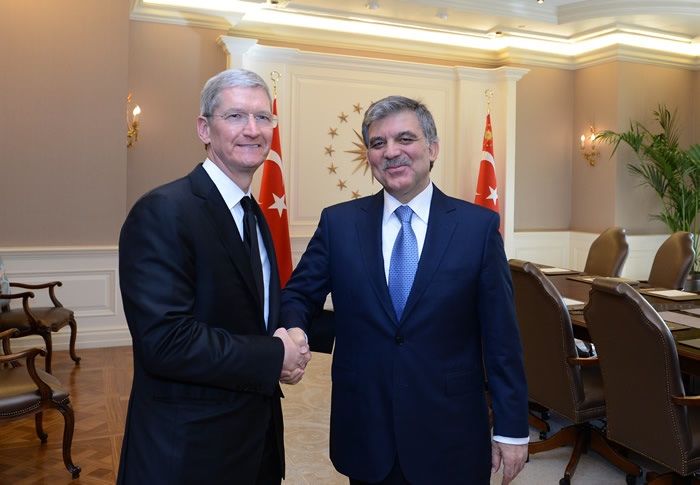 Yesterday, Turkish government officially confirmed that Apple CEO Tim Cook was meeting President Abdullah Gül at the Çankaya Presidential Compound in Ankara to discuss a potential $4.5 billion iPad deal and other major initiatives and incentives in the 74 million people country.

The official website of the Turkish government on Tuesday published details of the meeting. The two leaders have covered a wide range of topics, including the possibility of an Apple research and development center in Turkey and how iPads could help improve education in the country.

President Gül pointed to the very broad region of influence Turkey has. The President further suggested to Tim Cook that he should examine the incentives and other amenities the country provides for the Research & Development areas and the existing technoparks, urging him to make investments in this area in the country.

Making investments in these areas in Turkey, the President predicted, will strengthen Apple in the country and the region. Thus, he said, the company will also augment Turkey’s value in this regard.

In addition to Turkish support for Siri, President Gül then requested that Apple “increase the number of its applications” in the Turkish language as well.

According to the website, the Apple CEO has officially confirmed that his company will open the first retail store in Turkey in April. The store should be located in Istanbul’s new Zorlu Center and will be “unique in many respects”.

Turkish government plans to buy fifteen million tablets for schoolkids over the next three years. The FATIH initiative, as they’re calling it, seeks to put tablets in over 40,000 Turkish schools.

In the DNA of Apple is education, declared Tim Cook, reiterating that they also attach utmost importance to software. He further informed the President that there are 70.000 registered iOS application developer and 9.000 applications in Turkey and said they could further develop this through education. “We carry out such an education even in our stores, as we also try to make our customers love Apple products.”

Referring to the cooperation they have established with four universities in Turkey, Mr. Cook emphasized that “we are a company that wants the digital content to be open for all”. About the President request that Apple’s Siri application should be available in Turkish as well, Tim Cook said they will work on it. He further suggested that such Apple products as iPhone and iPad should be excluded from the tax list for luxury products, extending his thanks to the President for receiving them.

Though initially thought to be worth an estimated $1.7 billion, the project’s funding has apparently ballooned to as much as $4.5 billion, representing a major business opportunity for Apple and its iPad.

President Gül visited Apple’s Cupertino headquarters in May 2012 to discuss the deal, with several Apple executives subsequently meeting with Gül.

During his tour of Apple’s headquarters, Gül pressed Cook to make a software keyboard with Turkish characters, which Apple did soon after. “President Gül offered his thanks to Tim Cook for responding to this request,” the government’s website stated.