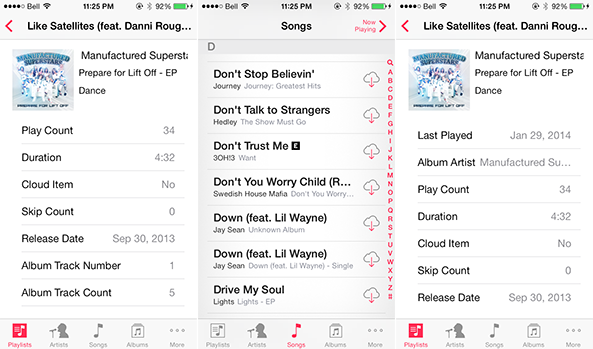 I’ve covered a lot of impactful jailbreak tweaks over the last week, ranging from Convergance and FaceOff 7 to AppBox and Remote Messages. But, smaller tweaks that make minor modifications to iOS deserve some mention too.

MusicAppMods by Adam Spindler is a new extension that serves two purposes: it hides in-line album art and reveals hidden song information in the Music app. Keep reading for a quick rundown of the tweak…

Once installed, MusicAppMods automatically removes the album art thumbnails that are typically displayed to the left of song titles in the Music app. It doesn’t make the list of songs any slimmer, however, so the tweak is really only an advantage to anyone that has a lot of downloaded music that is lacking album art. But for those that are purchasing music directly from iTunes, I don’t really see the purpose in this aspect of the tweak.

Additionally, you can tap and hold on a song name to bring up hidden information including its last played date, album artist, play count, duration, skip count, release date, album track number, album track count and whether it’s cloud item or not. I suppose if you’re an audiophile, having this information at your fingertips doesn’t hurt. MusicAppMods for iOS 7 is 99 cents on Cydia in the BigBoss repository.

Both features can be toggled on or off through the Settings app.

Is this tweak worth spending a cup of coffee on?