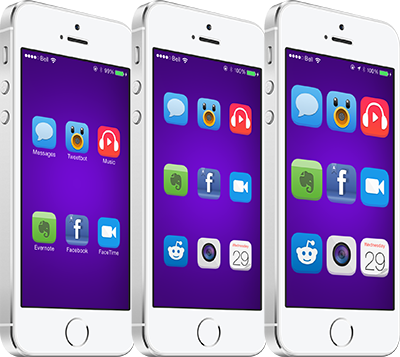 I have been testing a lot of Lock screen jailbreak tweaks over the past few weeks, and quite honestly I have walked away disappointed on more than a few occasions. A lot of add-ons that are dependent upon frameworks like Cydget have performed poorly on my iPhone, some sending me into Safe Mode, and this has caused me to be increasingly selective about which packages I choose to install on my device.

Having said that, a new jailbreak tweak called AppBox is one that is quality enough to meet my high standards for recommendation. The extension adds an additional page to the Lock screen, accessible by swiping left, with a grid of icons for quickly launching apps without fully unlocking your device. The tweak has a number of options that can be adjusted, so dive in and let’s take a look…

After installing AppBox, the first step is to make sure the tweak is enabled through the Settings app. Then, you can set which apps you would like enabled or hidden on the AppBox screen. The layout of the icons is adjustable based on both rows and columns, with my personal favorite being a 3×3 grid. I suggest playing around with it until you get a setup that you like. The screenshots above should give you some ideas. 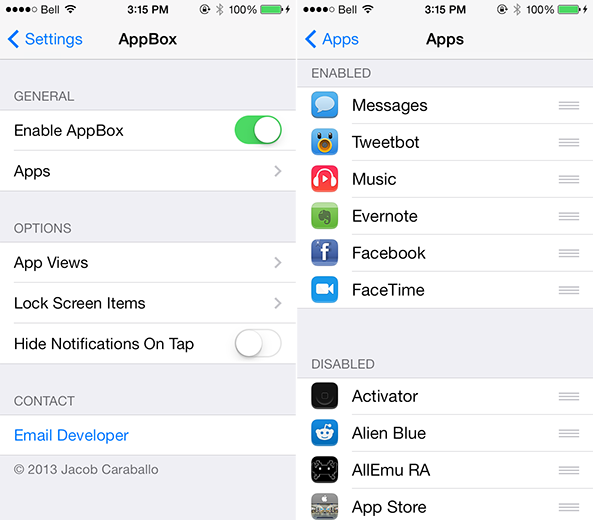 When you tap on an app icon, it will bring you directly to that app. If you have a passcode enabled, you will be prompted to enter that first. If that doesn’t sound very convenient, there is an auto-unlock mode that, when enabled, temporarily unlocks your device when opening apps from AppBox. The device automatically locks again when the Home button is pressed. A full unlock mode is also available.

Better yet, certain apps have an associated view that functions something like a widget. When you hold down on the Facebook icon, for instance, the quick compose prompt will appear. The new message composer appears when you tap and hold on Messages, and a list of playlists is displayed by holding on the Music icon. This is a very cool feature, and one that I hope is expanded to many other third-party apps in the future. 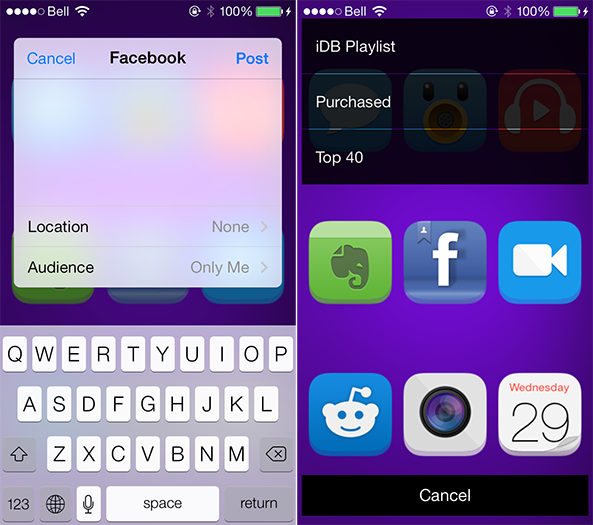 AppBox has some customization options to choose from, including toggle switches for hiding app badges and labels. The size and opacity of the icons can be adjusted with sliders, and the icon view background can be blurred. And while many other tweaks already do this, AppBox can also be used to hide Lock screen elements like the top and bottom grabbers, camera grabber, date header and slide to unlock.

The only bug that I experienced with AppBox was a minor one where the Notification Center and Control Center grabbers briefly appear on the AppBox screen. iOS developer Jacob Caraballo, the creator of the tweak, acknowledges the issue and is investigating what is causing the problem. Asides from that, the tweak has functioned perfectly on my iPhone and looks like something that Apple designed themselves.

AppBox is 99 cents on the Cydia Store for iPhones, iPads or iPods on iOS 7 or later.

Let’s see how the tweak looks on your Lock screen.