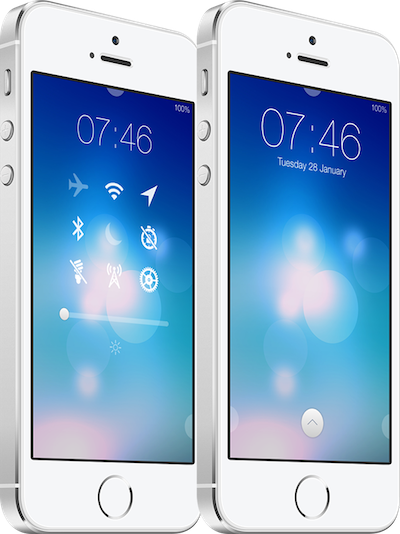 Apple has always exercised fine-tuned control over iOS by making it a relatively closed platform, at least compared to Android. That is one of the main reasons why jailbreaking exists in the first place, with a major draw being the ability to customize an iPhone or iPad far beyond what is traditionally allowed. Convergance is an upcoming project for iOS 7 that aims to do just that, taking the Lock screen in a bold new direction with a crisp design, quick toggles and more…

Convergance is a Substrate-based extension for the iPhone, meaning that it is highly integrated with iOS and does not require additional tweaks like WinterBoard or DreamBoard to function. The jailbreak tweak, a product of iOS developer Matt Clarke, both simplifies the look and brings useful features to the Lock screen. It has a beautiful design by default, and will also support third-party themes when released. As of writing, the tweak is about 75 percent completed.

Clarke explains the reason Convergance is designed the way it is:

Every detail has been considered, from the ease of use of the widget feed to the smallest of animations. The lock slider elegantly melts away the interface to reveal your applications running underneath. The blurred background helps to make the information most important to you much more visible, and when you change the wallpaper, the whole feel of the interface changes with it.

The complexity of Convergance is what makes it truly great. There are four toggles added to the Lock screen, each serving a different purpose. The bottom-left semicircle swipes to the right and reveals a clean-looking quick toggles menu for popular items like Airplane Mode, Wi-Fi, Location Services, Bluetooth, Do Not Disturb, Settings and Cellular Data. There is also a slider for adjusting the screen brightness. The toggles serve an important function, as Control Center is inaccessible when Convergance is enabled because of what Clarke describes as both aesthetic and technical reasons. 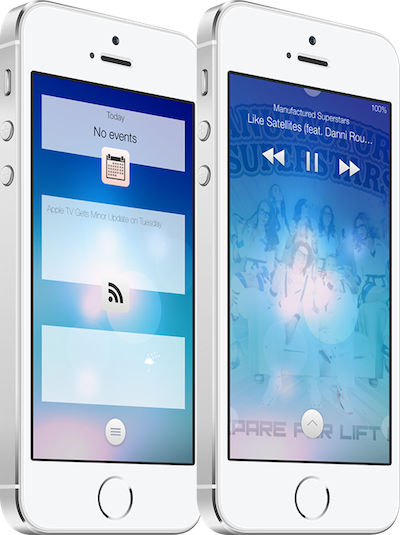 The semicircle tab at the top of the Lock screen can be dragged down to reveal a list of widgets. In the alpha version of Convergance that I am testing, there are only three widgets for an RSS feed, events and weather. I wasn’t able to get the weather widget working, as you can see in the screenshots, but this is only a pre-release version of the extension. Clarke says he still has about three weeks of work left, which includes completely redoing some of those widgets.

The last toggle is the most noticeable one, a white circle in the bottom center of the Lock screen. When you drag up on this tab, the Lock screen slowly pans out to the passcode view or goes directly to the Home screen if you don’t have one set. It took me a few minutes to get used to unlocking my iPhone with a vertical swipe, versus the traditional “slide to unlock” with its horizontal orientation.

Convergance also makes some aesthetic changes to the Lock screen, moving the clock higher up and eliminating the status bar entirely. This means you won’t be able to view your signal strength, carrier logo, orientation lock, location services and so forth until you unlock your device, although the charging indicator still shows by default. 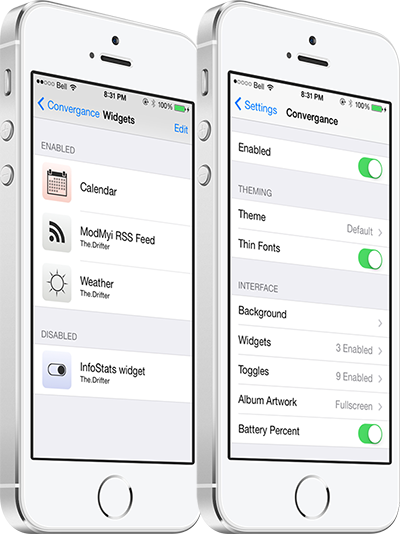 Battery percentage can be toggled on through the tweak’s options in the Settings app. Other configurable options are available for controlling the background blur, using an HTML wallpaper, enabling additional toggles and widgets, setting the size of album artwork, enabling thin fonts and changing the theme.

It is clear that Convergance will only be as powerful as the community around it. Designers will be able to release themes specifically for the extension, and developers are provided resources to write additional widgets based on Objective-C or HTML for the Lock screen. It will require a collaborative effort from everyone to make Convergance a true success, although it is already looking very good in its formative days.

From now until release, the focus will be on bug fixes. Known bugs, some of which I personally experienced, include notifications from third-party apps displaying incorrectly, unusable music controls, a black screen after rebooting and the lack of a keyboard for alphanumerical passcodes. After the initial release, support for other Lock screen extensions like AndroidLock XT and LockInfo is planned. iPad compatibility will follow.

Overall, I was impressed with the functionality and performance of Convergance. The tweak worked well in unison with Cydget and NoteCreator, and not once has it put my iPhone into Safe Mode. Convergance is slated for a February release for iPhones and iPods running both iOS 6 and iOS 7, and those that can’t wait can pre-order here by providing your Cydia ID number and UDID alongside a donation of $2 or more.

Are you excited for Convergance?