The nation’s second-largest wireless carrier, AT&T, yesterday reported its Christmas quarter earnings revealing steady growth, despite T-Mobile’s taunts and its Un-carrier initiative. Although AT&T (and Verizon) stopped divulging iPhone activations, the carrier confirmed selling 7.9 million smartphones in the quarter, a decline from the 10.2 million smartphones it activated a year ago.

By comparison, rival T-Mobile added 869,000 postpaid subscribers during the fourth quarter of 2013. The carrier’s 566,000 new postpaid wireless additions is a decline from the 780,000 net postpaid additions it reported in the year-ago quarter.

AT&T reported $33.2 billion in revenue, good for a profit of $6.9 billion and earnings of $0.53 per share. The company managed to sell 440,000 tablets during the quarter and smartphones made up a whopping 93 percent of total phone sales (77 percent of the postpaid phone base). 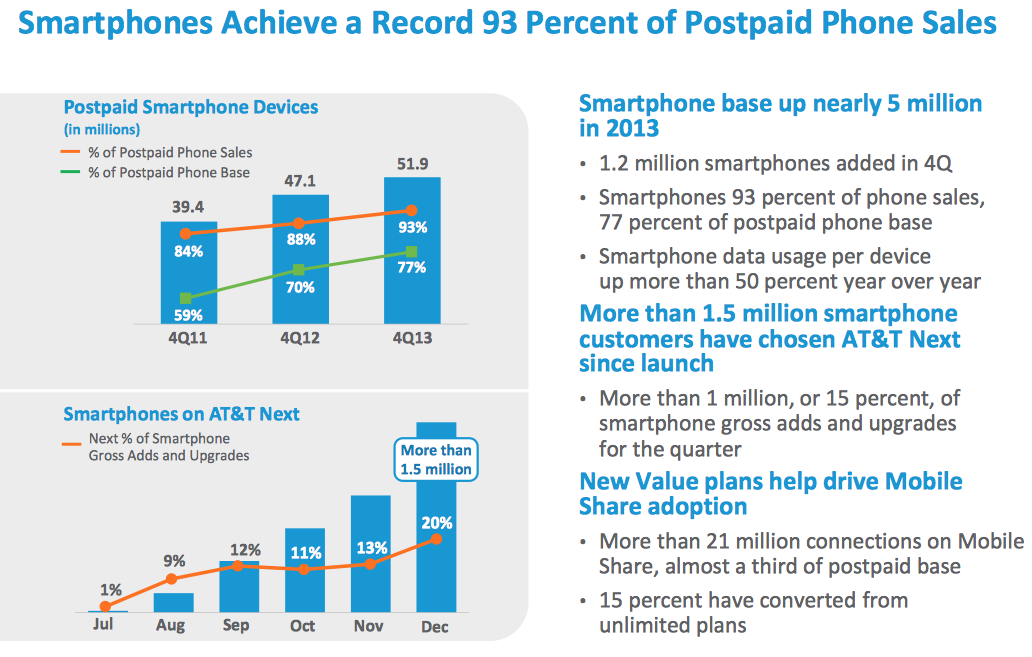 Both contract and overall churn rate were at a record low of 1.11 percent and 1.43 percent, respectively. The figure compares favorably to the 1.7 percent churn that T-Mobile had on the quarter.

During the holiday quarter, AT&T rolled out its LTE to a bunch of new markets, stopped offering traditional monthly voice and data plans to new customers, launched Mobile Share Value plans with No Annual Contract options and unveiled new data plans for tablets with 250MB/1GB buckets for $5 per day/$25 per 3 months.

iPad Air activations during the opening weekend were up 200 percent on AT&T’s network compared to last year’s launch. The company’s Next device upgrade program attracted 1.5 million new customers since its July of 2013 launch, the firm said.