The nation’s second-largest wireless carrier, AT&T, today introduced new Mobile Share Value plans that, similar to T-Mobile’s Un-carrier approach, disentangle the device hardware cost from the monthly service charges, allowing people who prefer not to buy their smartphones subsidized to save at least $15 or more per month on Mobile Share Value plans.

These savings kick in when you buy a new smartphone or bring your own device bought at its full retail price, get a new smartphone for no down payment with AT&T Next or switch to the new plans when your smartphone is no longer under contract. All Mobile Share Value plan customers will benefit from shared data plus unlimited talk and text on their phones, the carrier said…

If you opt for one of the pricier Mobile Share Value tiers, you can save up to $115 per month for one device and up to $105 for accounts with two devices attached. 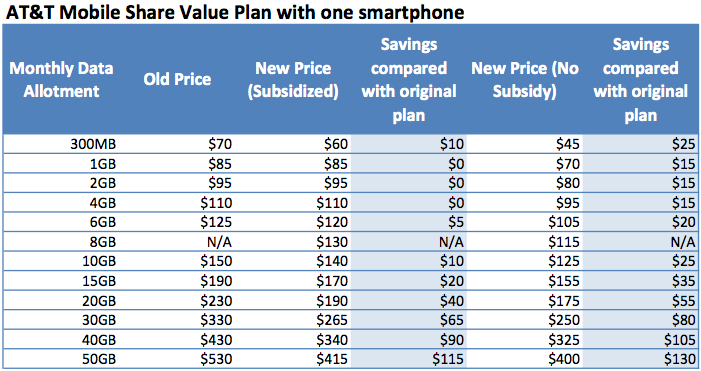 In the case of the $70 per month 300MB single device tier, Mobile Share Value brings the monthly cost down to $60 for a $10 per-month saving. An unsubsidized smartphone on the 300MB per month plan will now set you back $45 per month ($120 per month for two phones on the 4GB plan).

The top-of-the-line $530 per month tier with 50GB of data will cost you $415 under the new Mobile Share Value plans. As for the new 8GB tier, customers who opt for this plan and buy a single device will be paying $130 per month, or $170 per month for two devices. 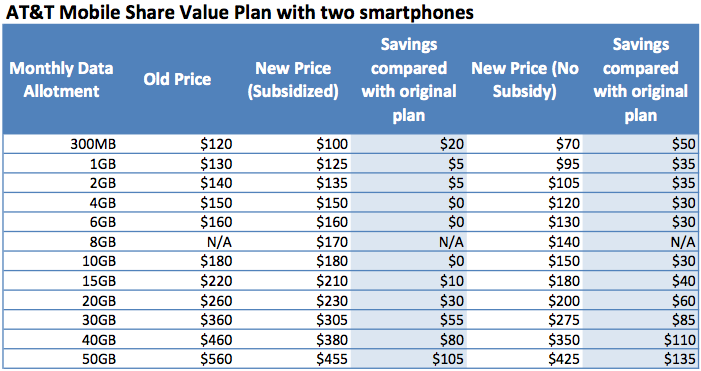 All plans include access to AT&T’s nationwide Wi-Fi network at no additional charge.

AT&T also introduced some changes to its Next device upgrade initiative, with a new 18-month upgrade option spreading payments over 26 months for even lower monthly smartphone payments.

So, now AT&T Next requires 20 or 26-month installment agreement with qualifying credit and wireless service plans. This lets you upgrade your hardware after at least twelve monthly installments have been fully paid (in the case of a 20-month agreement) or after eighteen months if you’ve signed up for a 26-month agreement, for no down payment, no upgrade fee, no activation fee and no financing fee.

The new Next tier will be available to consumers for up to four smartphones, and to select small business customers, who may provide employees with up to six company-owned devices.

Should you cancel your wireless service, device balance will become due.