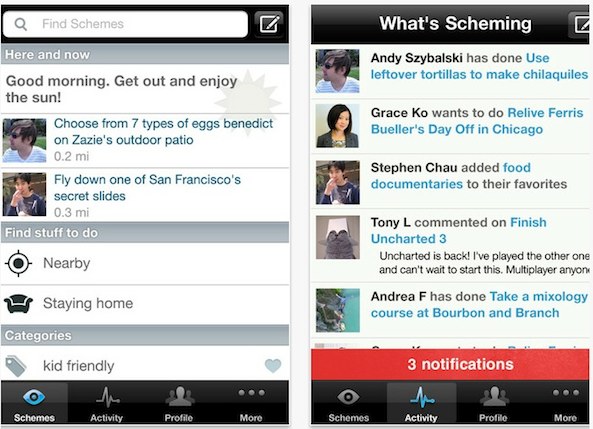 Another Google service has bitten the dust as the Internet giant is set to shut down the activity recommendation app Schemer come February 7, 2014. The Next Web first noted earlier in the month that Schemer would be laid to rest in the Google graveyard.

A few days later, a Google post has confirmed the news. This past weekend, the search giant has removed the Schemer app from the App Store and has issued an email notice to Schemer customers informing them to download their data until February 7, 2014…

A farewell post on Google+ explains that Schemer is no longer needed because its functionality has been largely folded into the ‘Explore’ section on Google Maps for Android and iOS.

The time has come for Schemer to power down.

Schemer launched in beta over a year ago to help inspire and motivate people to do more awesome stuff, and though the app is shutting down, the adventures will continue. You can use the “Explore” section on Google Maps for Android and iOS to find interesting things to do around you, or Field Trip to uncover hidden or unique things in your city, among others.

All your schemes are available for download until February 7, 2014, after which all data will be permanently and irrevocably deleted. You can find the simple steps to download your data here.

In the meantime, stay curious, ambitious, daring, and above all, stay adventurous!

Thank you for all your support on this journey!

To download your Schemer data, sing in to schemer.com using your Google account, select ‘Email me my schemes’ at the top of the page and Google will deliver your data to your Gmail account within 24 hours of the request.

Also, this from a support doc:

If you wish to manually delete your Schemer account but would like to download and save all your data, wait until after you have received the files in your e-mail account before doing so. All Schemer accounts will be automatically erased after February 7, 2014.

Schemer launched in May 2012 (the Android version arrived six months earlier), but failed to gain much traction. As Oliver wrote in his announcement post, “we expect to see it killed off and rolled into Google+ by the end of the year”.

The application was meant to make it easy for users to discover things to do in order to “make the most of your day”. That included simple stuff like going bowling, or checking out a restaurant, or something more ambitious like painting your first mural.

The program required a Google+ account and allowed you to share schemes with friends and get suggestions based on your past activity.

Are you sad to see Schemer go?

Have you tried this app at all?