If you’ve been jailbreaking for any decent amount of time, you’ve surely heard of the legendary Ayecon theme. This is a theme that set the standard for detail when Retina displays were still a relatively new feat in the mobile device industry.

A lot has changed since Ayecon first came riding over that hill on its white horse, reinvigorating the stagnant theming space in the process (I know some people will debate Ayecon’s design, but they simply can’t deny its influence.)

Flat is in, skeuomorphism is hated (and dead). So where does Ayecon fit in with this wave of change? Will Surenix, its designer, abandon the style that made Ayecon a success in the name of staying with the trend? Or, will he instead, stick to what made Ayecon work? Check inside for the full scoop along with the detailed video walkthrough.

The answer to that question is obvious if you’ve seen the screenshots accompanying this post. Of course, Ayecon won’t abandon its skeuomorphic style in favor of iOS’ new direction; it bucks the trend and does so proudly.

If you hate iOS 7’s icons then you’ll feel right at Home with Ayecon for iOS 7. It brings back the familiarity that was a staple of iOS for six successful generations. Ayecon is still one of the, if not the most detailed themes to ever hit Cydia. Super high resolution displays are the norm these days, so the effects are not as eye-popping as they once were, but it still looks awesome. 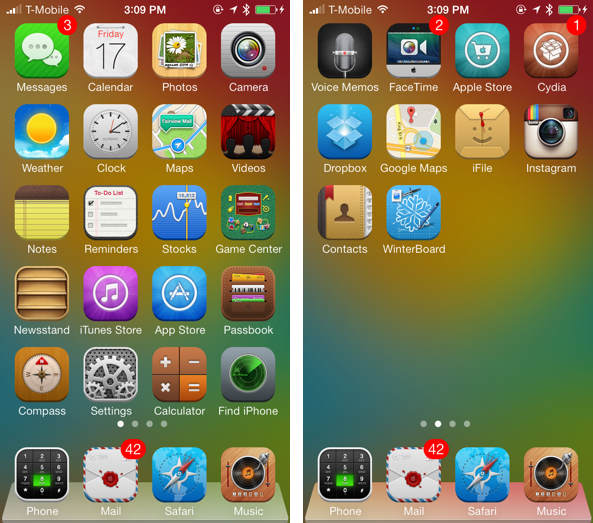 The insane level of detail is still present in iOS 7

You’ll notice the meticulous detail on every single one of the stock iOS app icons. Even popular third party applications, jailbreak or otherwise, get the Ayecon treatment. You’ll notice apps like Instagram, iFile, Dropbox, and many others, all benefit from Ayecon’s insane level of detail.

For apps that haven’t yet been themed, they’ll still fit in well with the overall style. This is because Ayecon applies an auto app mask to every single app icon on your screen. The mask lends a three dimensional effect to the app icons and gets rid of the flat style that permeates the whole of iOS 7.

But what if you’re like me, and you prefer the look of iOS 7? What to do then? My advice is to enjoy the other aspects of Ayecon while using the iOS 7 app icons. This means that you can still reap the benefits of the changes to the dock, status bar, wallpaper, and messages without having to use the skeuomorphic hyper-detailed app icons that are the theme’s hallmark.

It may seem a little sacrilegious to promote using Ayecon without using the app icons that the theme is known for, but skeuomorphism is a very polarizing subject. I mentioned this to Surenix, and even he agreed; there’s still a lot to benefit from even if you don’t want to use Ayecon’s app icons.

The best argument for using Ayecon, outside of the tweak’s namesake feature, is for its dock. The Ayecon dock is more akin to the dock present in pre-iOS 7 devices. It brings the sense of having more breathing room to play with. It’s much like the effect that happens when you tear down a wall in the house t open up the living space; it makes the iPhone 5s and other 4″ screen devices seem taller.

If you hate the new dots that represent the signal strength in iOS 7, then you’ll appreciate the status bar that comes with Ayecon. Surenix’s theme brings the cleaner looking status bar present on pre-iOS 7 devices. This feature, just like the dock, can be independently enabled or disabled via WinterBoard.

Stock iOS 7 status bar on the left, Ayceon on the right

Ayecon for iOS 7 comes with nine new wallpapers that accentuate the look and feel of the theme. Each of these wallpapers can be enabled via the stock Settings app > Wallpapers & Brightness. 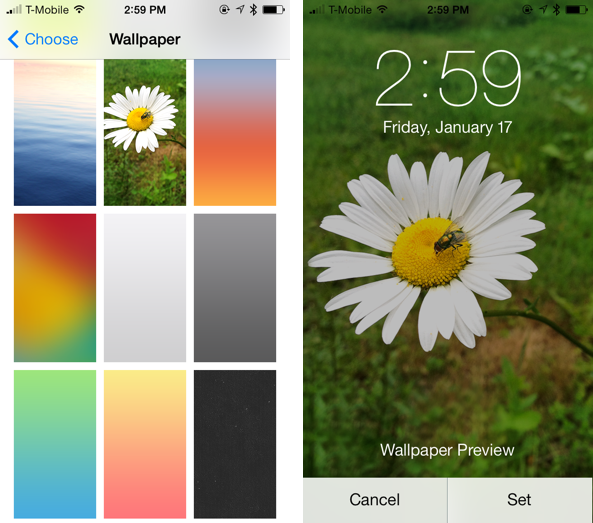 The is one of the more subtle features of Ayecon’s theme, and it too can be enabled independently in WinterBoard’s settings. The message bubbles with Ayecon have a more squared off look, but it’s hard to tell the difference without comparing each side-by-side. 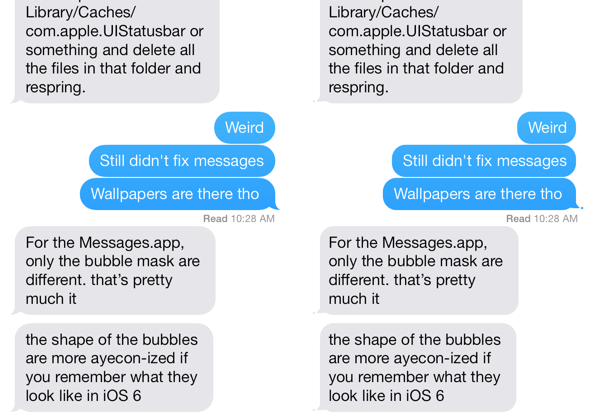 Stock iOS 7 on the left, Ayecon on the right

WinterBoard, being just recently updated to work with iOS 7 and the arm64 devices like the iPhone 5s, still has its fair share of bugs and fixes in store. Saurik acknowledges as much on WinterBoards’s Cydia page. With that said, the only issue that I encountered while testing out Ayecon was a simple caching problem. If you notice that some of the features don’t show up when you have Ayecon installed and enabled, try the following:

Step 2: Delete all of the files located in this directory

Doing this should clear up any caching issues that occur when enabled or disabling certain features of the theme.

I always make it a rule to be up front with you guys, so I’m going to be honest about how I plan on using Ayecon. As you know, I’m not a big fan of skeuomorphism. I used to like it, but ever since iOS 7, I prefer the cleaner look. This doesn’t mean that I won’t use Ayecon on my daily driver, I’ll just use it without enabling the SpringBoard option in WinterBoard. This means that I can enjoy the other benefits of Ayecon, namely the dock, without having to give up the flat icon style prevalent throughout the whole of iOS 7. 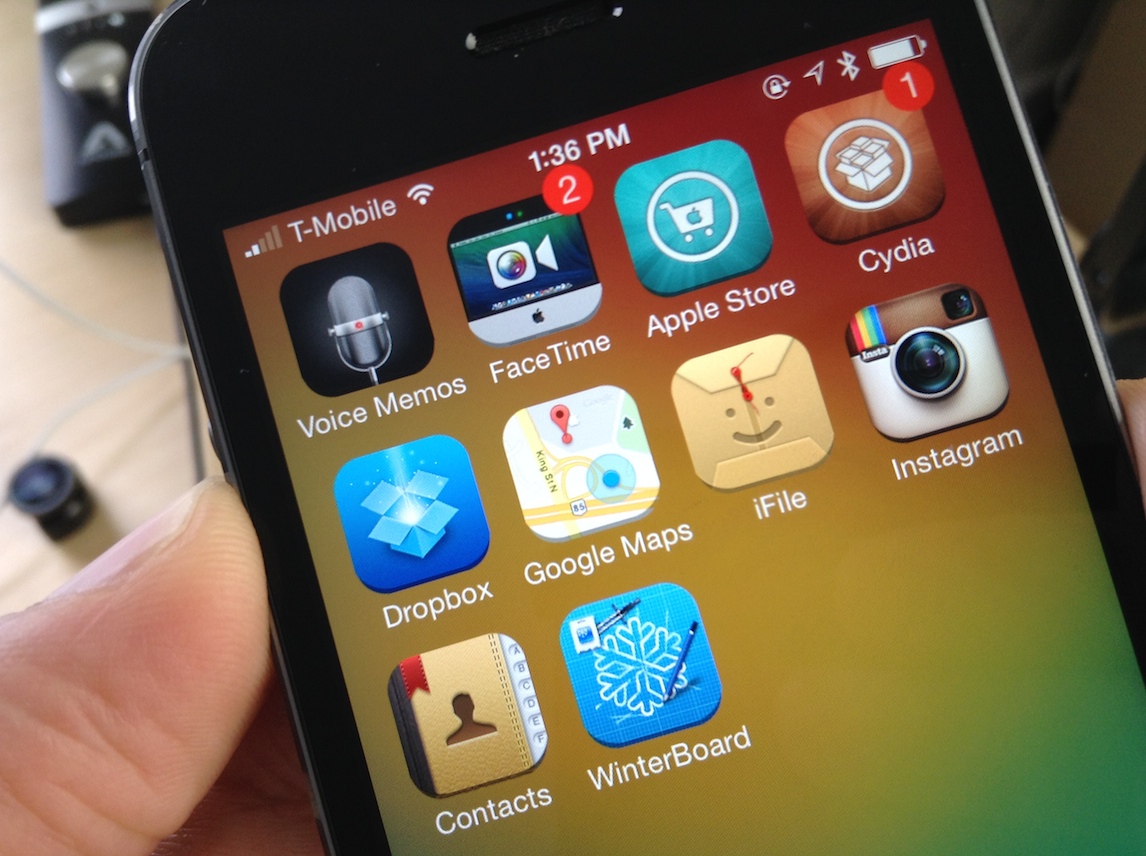 Even years after its initial debut, Ayecon is still one of the gold standards of iOS theming, and a great example of how to go about the process for those keen on creating themes. If you’re interested in giving it a try, then head over to Cydia’s BigBoss repo where it can be had for $2.99. If you’ve already purchased Ayecon for iOS 6, then Ayecon for iOS 7 is a free update. Be sure to share your thoughts down below in the comments.