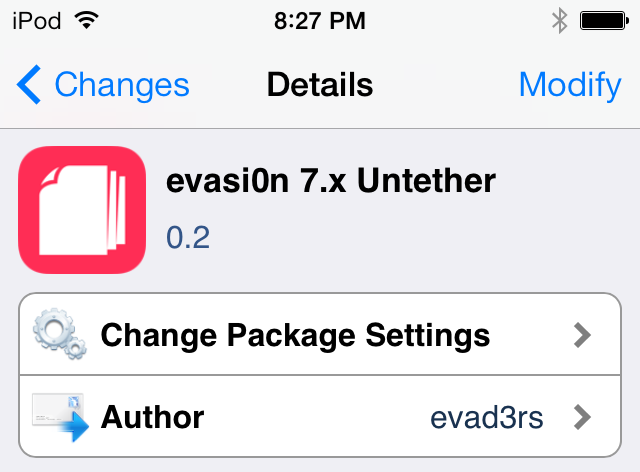 A few days ago the Evad3rs released version 1.0.1 of their Evasi0n7 jailbreak tool. The update’s big feature was its removal of the controversial TaiG, which we explained in this post.

Previously, if you wished to take advantage of the latest 1.0.1 update, you had to re-jailbreak your device with Evasi0n 1.0.1. Obviously, that’s quite inconvenient for most users, so the Evaders have released an easy to use Cydia package update to facilitate the changes and make them available to those who jailbroke their devices with Evasi0n 1.0.0.

The package is called evasi0n 7.x Untether, and its 0.2 update is available right now via Cydia’s default Telesphoreo repo. Check inside for more details.

Here is the official list of changes included with the 0.2 update of the evasi0n 7.x Untether package:

Again, if you’ve already jailbroken with evasi0n 1.0.1, there’s no need to worry about this update, because you already have the latest update. You should also be reminded not to uninstall the untether package, because it is required to maintain your jailbroken device.

It is recommended that all jailbroken users update this packaged (if prompted). If you jailbroke your device using Evasi0n 1.0.0, then yes, you should update. The Evasi0n 7.x untether is free for download, and doesn’t even require a reboot after installation. Get to downloading, and report back with your experience.