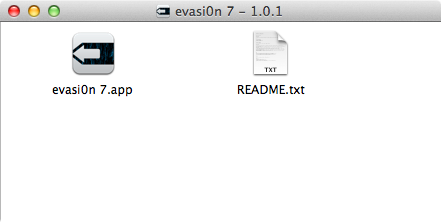 The iOS 7 jailbreak tool, Evasi0n7, received its first update just a few moments ago for the Mac and PC. The update, which as billed as a 1.0.1 release, removes the primary source of the controversy surrounding Sunday’s release—the Chinese TaiG package.

Users were outraged when Evasi0n was found to include a bundled TaiG package, because TaiG has been closely associated with piracy, and piracy was easy to achieve “out of the box” with the install. Although your system has to be set to a primary Chinese language setting for the packages to appear as an option, many users still frowned upon its inclusion.

Also today, Geohot revealed that after a thorough inspection, the jailbreak was safe for users, and contained nothing malicious. Even with that revelation, Pod2g and the Evad3rs felt that a change had to be made, especially with the whole growing issue of piracy:

Pod2g goes on to state that users should expect more updates soon, specifically the compatibility issue with the iPad 2:

We still have to work on the compatibility issue with the iPad 2, but we have been busy celebrating with our family… Tomorrow probably!

You can download Evasi0n7 version 1.0.1 from our downloads page. We’ll have more details on this decision reversal as they become available.