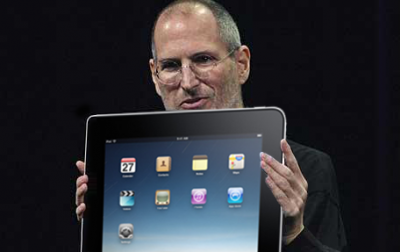 A new rumor out from Taiwan alleges that Apple will release a large form-factor iPad with a screen measuring 12.9 inches diagonally in October of next year, primarily aimed at the education market. The next iPhone, the one with a larger screen compared to today’s four-inch iPhone 5s/5c, is apparently scheduled to go on sale in May 2014.

I’m not buying the May release date because Apple has never released an iPhone in May. Besides, this would break Apple’s tradition of releasing new iPhones in Fall, the practice Tim Cook established with the iPhone 4s introduction on October 4, 2011…

Apple is rumored to release a 12.9-inch tablet in October 2014, targeting North America’s educational market, according to sources from the upstream supply chain.

In addition to tablets, Apple is also rumored to be planning a larger size iPhone for May 2014, using a 20nm processor manufactured by Taiwan Semiconductor Manufacturing Company (TSMC), the sources noted.

The article goes on to note that a large-size iPad will be built by Apple’s Mac assembler Quanta Computer.

DigiTimes first mentioned Apple had commissioned Quanta to build so-called iPad maxi, or iPad pro if you will, in its late-November report. Today’s article mentions Apple was originally expected to adopt either 12.9- or 13.3-inch panels, but recently settled on a 12.9-inch form factor.

Proceed with caution: for all we know, this 12.9-inch iPad for the education market could actually turn out to be a new MacBook or MacBook Air model. In any event, it’s worth mentioning that Quanta also assembles existing MacBook and MacBook Air models.

ETNews first mentioned in May 2013 that a 12.9-inch iPad was in the works. The rumor was corroborated by The Wall Street Journal this summer, with The Korea Times recently claiming that 12.9-inch screens for the device are now in production by a “first tier display supplier”.

Chinese-language PadNews recently hinted that a 12.9-inch iPad could have a 4K display boasting a resolution of 3,840 pixels by 2,160 lines. Again, this sounds more like a Retina MacBook Air to me.

As for a larger iPhone, Bloomberg thinks Apple will release two iPhone models next year, one with a 4.7-inch display and the other rocking a 5.5-inch screen.

Moreover, a recent report by Korea’s Hankyung asserted TSMC was contracted for the bulk of the Apple A8 chip production. A successor to the existing 64-bit A7 processor powering the iPhone 5s, iPad Air and iPad mini with Retina display, the A8 chip should of course power 2014 iDevices.

Apple CEO Tim Cook hinted rather cryptically in his traditional end-of-year memo to troops that Apple has “big plans” for 2014 that “customers are going to love”.

Not that it tells us much about Apple’s pipeline (9to5Mac has the full contents of Cook’s email) as Apple executives always hint at great new products coming in the near future.