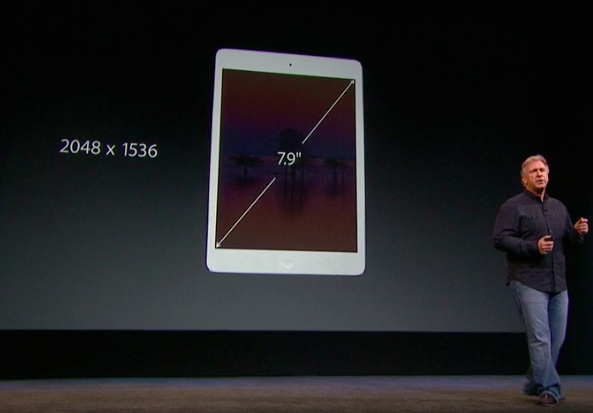 As the Wall Street Journal in July gave credence to 12.9-inch iPad speculation, which dates back to a sketchy report published in May 2013, we’re now officially in the clear as far as crazy rumors go. The mythical iPad designed for real men – let’s call it the ‘iPad maxi’ for the time being, shall we? – could give Retina a new meaning by incorporating an ultra high-resolution 4K screen.

If true, the device’s advanced display will manage to squeeze 8+ million pixels typically found on desktop monitors – such as Dell’s latest 27-incher or Sharp’s 32-inch IGZO monitor – onto a canvas which measures less than thirteen inches diagonally.

Given that Amazon and Google now have tablets that outperform the iPad’s 2,047-by-1,536 pixel resolution screen, I imagine Apple must be very interested to reclaim the Highest-Resolution Tablet crown it once held…

According to a report by Chinese-language PadNews (Google Translate), Apple engineers are designing the iPad maxi with 4K resolution in mind. If true, this further corroborates that the iPad maxi could be aimed at creative pros and power users.

The publication’s sources think Apple may release at least one iPad in April 2014 (an iPad Air successor with Touch ID and a faster CPU, perhaps?), with another one outfitted with 4K display technology to follow in October 2014.

@dujkan No, How is that crazy Apple have the right to test every inch, does not mean it ever going to ship.

Wikipedia lists four different 2K resolutions, with the full HD 1,920-by-1,080 pixels being the likely candidate for iPad maxi, at least in my personal opinion. Also, the current 2,048-by-1,536 pixel Retina screen is technically 2K so perhaps the April 2014 device is simply a refresh to the current iPad lineup.

Be that as it may, Apple’s never adopted the 16:9 aspect ratio for iPads, or full HD resolution, so upcoming iPads could pose a nice opportunity to right that wrong.

Native 1080p format would offer the benefit of watching full HD iTunes movies without downscaling. Besides, pro video editors typically demand native 1080p screens because all their footage is in 1080p.

Adopting the 1,920-by-1,080 pixel full HD format would inevitably make the iPad’s 4:3 screen wider and shorter (in landscape orientation). On the other hand, 4K (or Ultra HD) resolution of 3,840 pixels by 2,160 lines may be a nice fit for the iPad’s 4:3 canvas, assuming Apple’s engineers have found the way to pack in two and a half times more pixels (4K versus Retina) on the 33 percent larger canvas (12.9 inches versus 9.7 inches).

4K would give the iPad max unmatched sharpness at around 400 pixels per inch.

That’s not as preposterous a proposition as it sounds.

Chinese manufacturer Vivo already has a phone with a 2K 1,440-by-2,560 pixel screen. For those not counting, that’s the same number of pixels as my 27-inch Apple Thunderbolt Display and more than the iPad’s Retina screen, in a smartphone form factor.

All told, iPad maxi talk has been picking up steam lately.

In addition to the Wall Street Journal, another publication, The Korea Times, recently claimed that “a first tier display supplier” – Samsung, perhaps? – is now sampling 12.9-inch panels for the iPad maxi. And if DigiTimes is to be trusted, Apple has inked a deal with Quanta to assemble the device for a 2014 introduction.

Order volumes are expected to be limited as Quanta could encounter “several challenges in terms of industrial design and assembly” when making the large-size iPad.

Do you buy this iPad maxi talk?