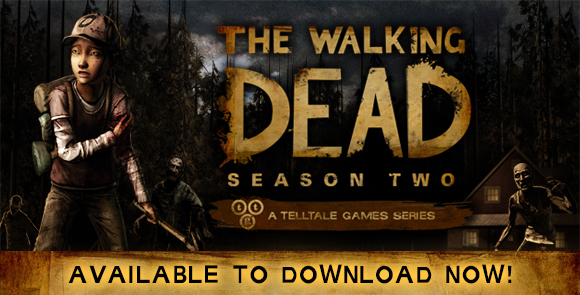 The Walking Dead: The Game – Season 2, the official sequel to 2012′s Game of the Year, has arrived and is now available your iPhone, iPod touch and iPad devices, as well as game consoles and old-school desktops running Microsoft Windows or OS X operating systems.

Based on Robert Kirkman’s award-winning comic books, the game puts you in the shoes of Clementine, a young girl orphaned by the undead apocalypse.

It includes a host of new survivors and locations, with the decisions you made in Season One and in 400 Days affecting your story in Season Two…

Many months have passed since the events seen in Season One of The Walking Dead, and Clementine is searching for safety. But what can an ordinary child do to stay alive when the living can be just as bad — and sometimes worse — than the dead?

As Clementine, you will be tested by situations and dilemmas that will test your morals and your instinct for survival. Your decisions and actions will change the story around you, in this sequel to 2012’s Game of the Year.

If you’ve already purchased the season, visit your profile page and hit the My Games tab to download the latest installment.

If you pre-order the game now, Telltale will throw in a ten percent discount on the Season Pass on PC and Mac. The desktop edition can be purchased via the Telltale Online Store or through Steam.

The season premiere is also now available for the PlayStation 3 and the Xbox 360.

The iOS edition is a $4.99 download from the App Store.

It’s compatible with the iPhone 4s/iPad 2 and up and requires iOS 6 or newer.

The five-episode series will see the remaining installments released periodically in 2014: Episode 1: All That Remains, Episode 2: A House Divided, Episode 3: In Harm’s Way, Episode 4: Amid the Ruins and Episode 5: No Going Back.

Note you can save 25 percent on additional episodes by purchasing the Multi-Pack [Episodes 2-5 bundle] within the app, in the Episodes menu.