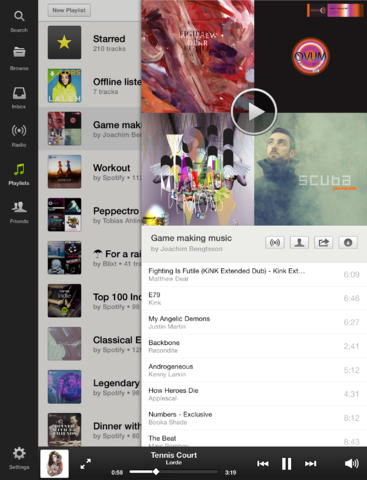 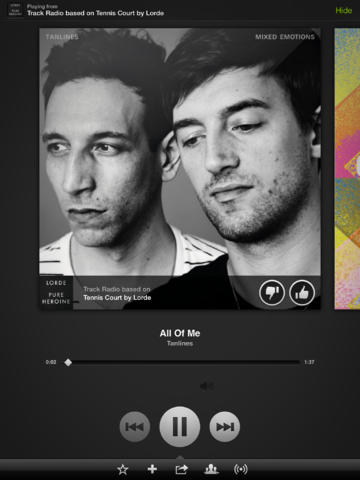 Having just wrapped up its news conference in Manhattan, the popular Swedish startup Spotify announced that its namesake five-year-old music-streaming service is now providing a limited amount of music free on tablets and smartphones (with a few caveats), just as The Wall Street Journal predicted.

Also, Spotify is now available in an additional twenty new markets and has landed an exclusive content distribution agreement with Led Zeppelin, an English rock band formed in London in 1968. The band has stubbornly refused to license its music for streaming and was holding out until 2007 to join iTunes so this is kinda big deal.

The Led Zeppelin deal arrives hot on the heels of an exclusive deal with Metallica, which Spotify signed a year ago. The full reveal is right after the jump…

The Zeppelin deal is exclusive, by the way, because “we persuaded Led Zeppelin to not allow their music on any other platform” in terms of streaming.

The legendary @LedZeppelin is here! Stream the albums as they’re released this week, #OnlyOnSpotify http://t.co/XLCptyaeSr #StreamZeppelin

Spotify has seen a cool 4.5 billion hours of streamed music in last year alone, as well as 1.5 billion user-created playlists which he likened to the “mixtapes for the 21st century, but on steroids”. For those not counting, that’s an average of a million and a half playlists created every single day. 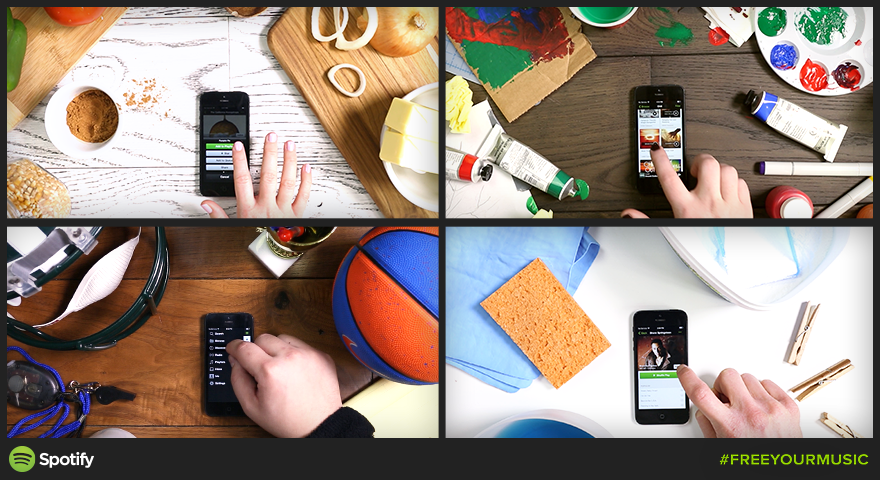 The startup pays back 70 percent to license holders for a total of $1 billion in license payments. “We’ve now become the biggest streaming service of any kind in the world,” he said, adding there has been a rapid increase of tablet listening in the home versus a desktop computer.

More than half of listening on Spotify is to users’ own playlists. He hasn’t updated us on Spotify’s subscriber size, however – the six million paying and 24 million active users data points are from earlier this year. 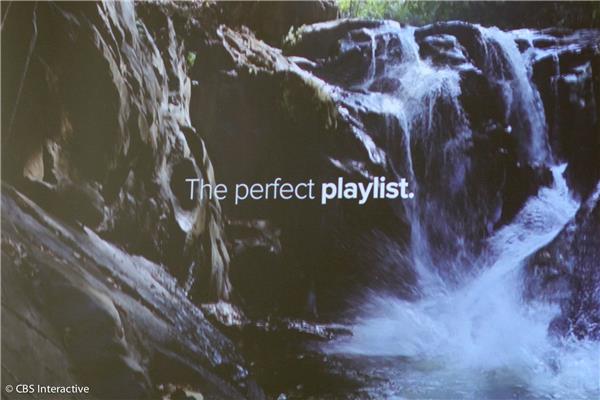 The service went from seventeen markets a year ago to 35 markets and today they’ve added 20 new markets, bringing the total to 55 countries where Spotify is available.

Among the newly-added markets: a bunch of countries throughout South and Central America and markets like Chile, Guatemala, Ecuador, Nicaragua and a few territories in Europe, including Hungary, Cyprus and Slovakia.

Japan rollout is a question of when, not if, Ek said. After the United States, Japan is the world’s #2 music market. 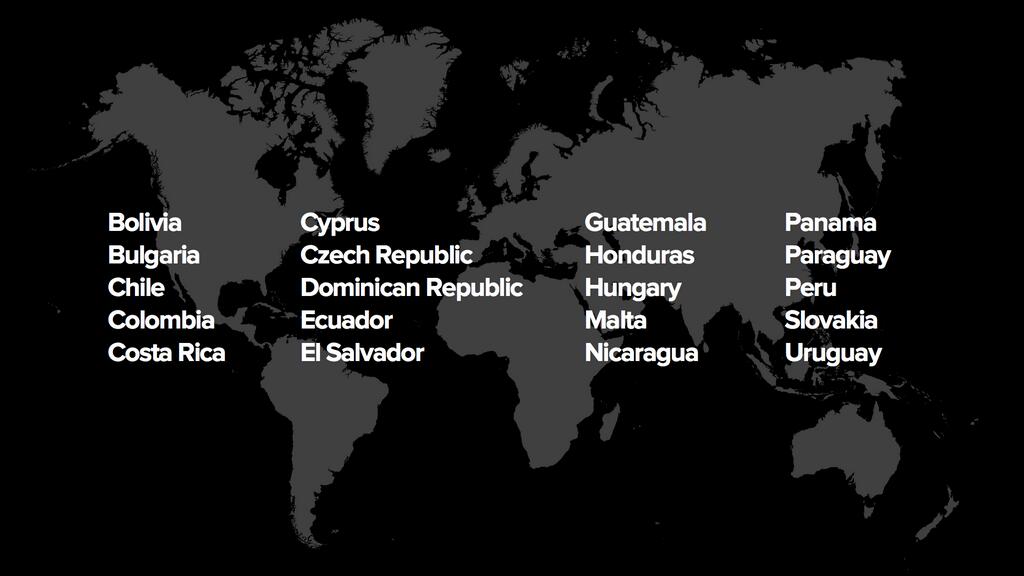 Rival Rdio today announced the expansion of its service into 20 new markets for a total of 51 countries. The development has turned Rdio into the third largest music subscription service in the world in terms of countries serviced, after Spotify and Dezeer which is available in a whopping 182 countries around the world.

Quipping how the piracy is “turning a corner,” Ek put up a slide saying ‘freemium’. 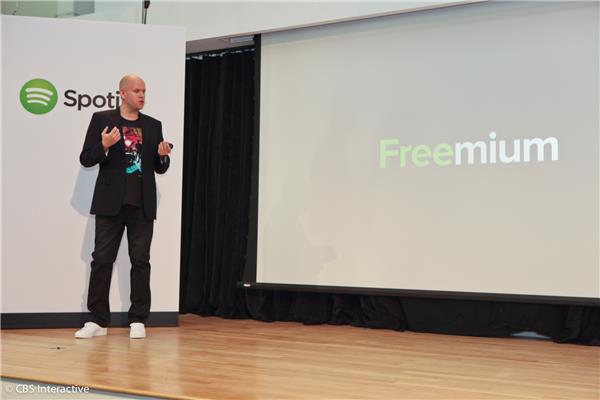 With that in mind, he announced – for the first time since launching – free streaming from tablets and smartphones, on both iOS and Android. It’s basically the same ad-supported free tier known to Spotify’s desktop users, only migrated to mobile devices.

You can search for songs and listen them on the go for free on your iOS or Android devices, provided you’re willing to put up with some advertising and song randomization as opposed to straightforward on-demand streaming.

The new Shuffle Play feature takes care of playing your songs randomly, with the ability to skip songs on a whim, favorite a track and more. “Now on Spotify, you can Shuffle Play any of your playlists on mobile for free”, he said. Note that this feature limits song randomization to a specific album or artist, as opposed to the entire Spotify catalog.

Free mobile streaming will be rolling out to all users during the course of the day. You’ll still need a Premium subscription to play individual tracks on demand, listen offline and remove the ads.

If you don’t mind listening to music in the Shuffle mode, the new free tier saves you ten bucks per month for Spotify Premium right off the bat. Your playlists will be available on mobile devices as it’s “the same as the desktop experience”.

Your music: Listen to all the playlists you’ve created and playlists from the people you follow. Spotify lets you discover new music, save, shuffle and share.
Your favorite artists: Want to listen to a certain artist? Just hit shuffle play, sit back and listen to their entire catalogue. Don’t settle for something similar. Don’t settle for just one track from the artist you want to hear every 20 minutes.
Discover great new playlists: Going for a jog or to the gym? We’ve got the playlist to help you go the extra mile. We know you just want the perfect music for a specific moment in time – and we’ve got you covered. There’s something for every mood, genre or moment.

And thanks to Spotify’s Connect platform, people can play their music through some of the high-end compatible speaker systems. 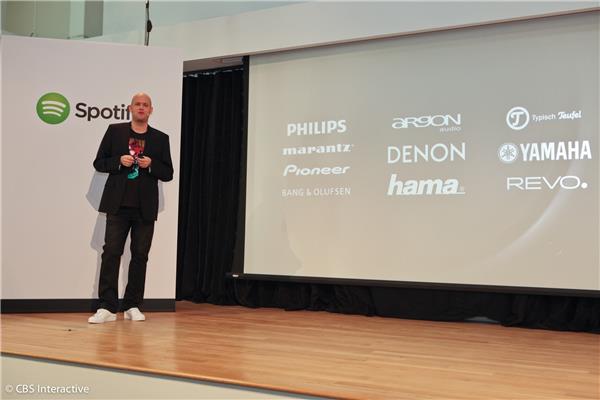 To free your music, visit the Spotify website now.

The music streaming space has seen a lot of activity in the past few years. Services like Rdio, Spotify, Pandora, iHeartRadio, Rhapsody, Dezeer and Apple’s iTunes and iTunes Radio are all vying for your attention.

iTunes Radio is U.S.-only, though new countries will be added some time in 2014. 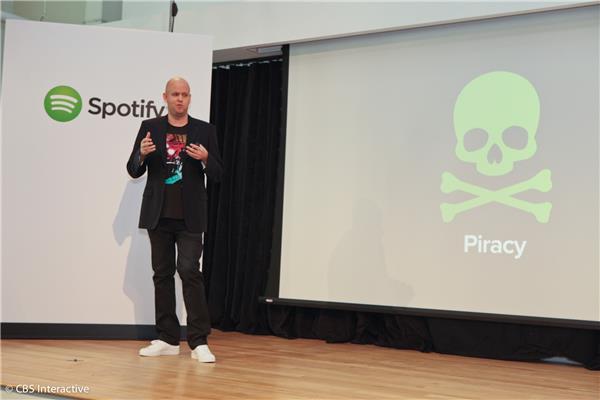 Disclosure: Spotify board member Sean Parker was one of the founders of Napster, a pioneering peer-to-peer file sharing Internet service that the music industry shut down. Of note, the Metallica drummer Lars Ulrich sued Napster back in 2000 for copyright infringement.

By the way, Led Zeppelin has sold more than 111 million albums in the United States alone, according to the Recording Industry Association of America. Still missing on Spotify: AC/DC, Tool, Garth Brooks and The Beatles.

#FreeYourMusic with Spotify on mobile. Shuffle play any artist, album or playlist on your iOS or Android device pic.twitter.com/XAnmYuSlPS

Spotify for iPhone and iPad is free in the App Store.