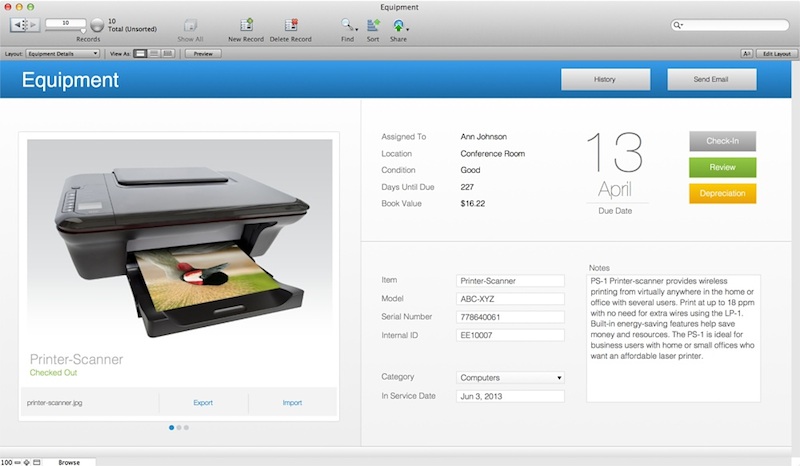 FileMaker, formerly Claris and now an Apple subsidiary, has been enjoying great success with its namesake cross-platform relational database application for decades now. FileMaker 12 was released nearly two years ago for the Mac and Windows PCs. There has been a lot of talk lately about the next major upgrade, FileMaker 13, but little in terms of leaks.

Well, the online Apple Store saw to that: in several countries, placeholder URLs along with website entries went prematurely live, presumably by accident. Furthermore, some versions of FileMaker Pro 12 have been seemingly discontinued in those stores, indicating that FileMaker 13 could be easily around the corner…

The FileMaker 13 entry was live shortly on Apple’s UK Online Store before the company took the listing down, but not quickly enough as MacRumors screenshoted it. FileMaker 13 was listed as shipping “within 24 hours”, although Apple hasn’t even announced the software yet or even issued a press release.

If website graphics is an indication, FileMaker 13 has a new Share button in the toolbar and comes with the accompanying iPhone and iPad apps, apparently revamped for iOS 7 aesthetics.

FileMaker, Inc., although owned by Apple, is run independently as a separate company.

In business for more than 20 years, FileMaker’s software is the top-selling database application for Mac systems which owes much of its popularity to an accessible user interface that hides the complexity of its powerful database engine.

Unlike traditional database applications, FileMaker is a true database system that can run on a single client or server – if need be – and doesn’t produce files or make forms. The app supports PHP for web connectors, ODBC connections and can import/export data to just about any format imaginable.

That it can be tailored to users’ needs and has iOS apps doesn’t hurt either.