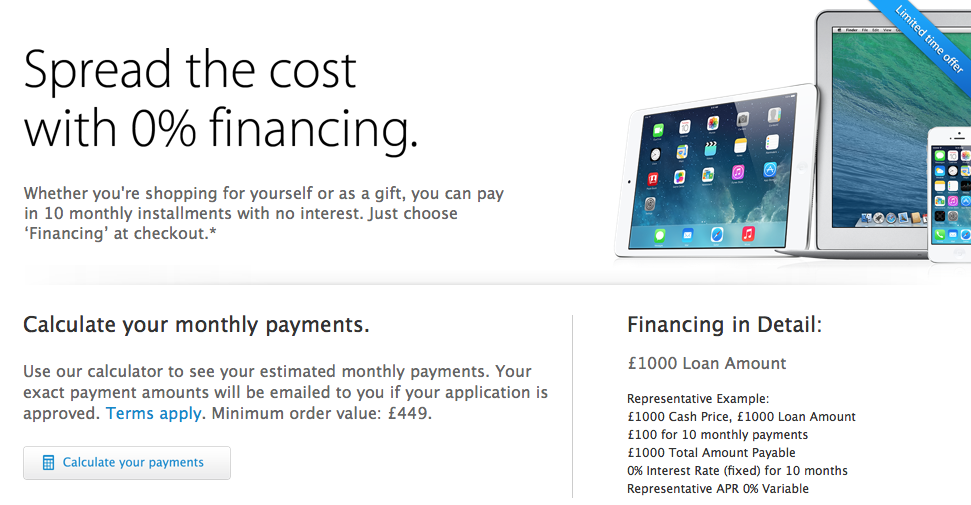 Apple’s Online Stores in some of Europe’s biggest markets are running an interesting time-limited promotion with interest-free financing on online purchases above £449 in the case of United Kingdom, which works out to about €400/$540.

Depending on the country, Apple has partnered with major banks to permit shoppers to have their repayments spread across ten or twelve monthly repayments with zero percent interest.

In the United Kingdom, the zero percent interest consumer finance promotion is available with ten monthly repayments on qualifying purchases made through either the online Apple Store for Consumers or the Apple Store for Education between December 2, 2013 and midnight of the January 10, 2014…

Terms and conditions vary from one country to another.

In addition to the UK promo, a zero percent finance offer is available over in Germany, France, Italy, Spain and other major European markets where Apple has retail presence. France and Spain online Apple Stores, for example, offer twelve monthly installments instead of ten.

Only hardware purchases are eligible in this promotion. You can’t buy software with zero percent interest unless it’s added to your hardware at the time of purchase. Ten and twelve-month interest-free plans are in addition to Apple’s existing 24-month financing options that include usual interest rates.

To take advantage of the offer, shoppers need to choose ‘Financing’ at checkout.

Following a credit check, your exact repayment amounts will be emailed to you if your application is approved. If the bank can’t run a credit check electronically, you may be asked to provide documentation to prove your identity.

Note that choosing ‘Financing’ at checkout will affect your estimated delivery date, which may be later due to the time required to process the financing application.

“When your application is approved, you will receive an email with the updated delivery date,” Apple explains.

The iPhone maker started experimenting with interest-free financing back in January in the 1.33 billion people market of China. Zero percent financing is a nice way of enticing potential customers that may not have enough cash on their hands, replacing the often substantial upfront payment with the more manageable monthly installments.