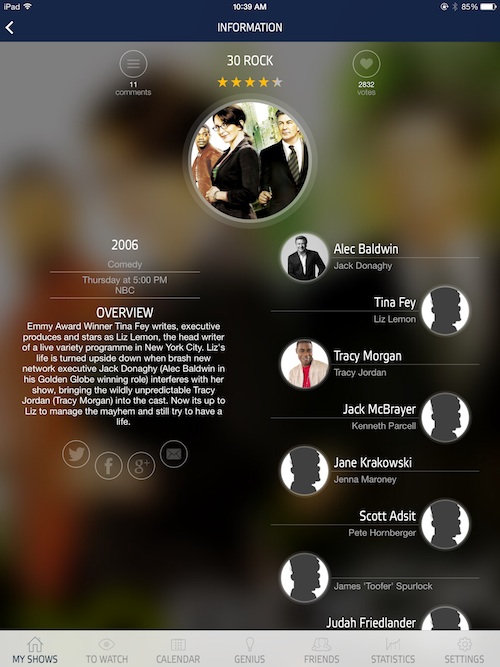 For some people, watching television is a ritual that cannot be disrupted. I have a few friends that won’t even go out on certain nights because they don’t want to miss their shows. Keeping track of past and future episodes can be a daunting task if you are an avid TV viewer.

iTV Shows 3 is a powerful TV tracker that uses multiple comprehensive databases to help you keep a schedule of shows you want to watch. Plus, TV tracking has never looked so good with this interface…

The app looks a lot like your iOS device does when you access Notification Center. Everything in the background goes blurry and everything in the foreground is transparent.

In the “My Shows” section, users can see a list of shows that have ended or will air this week, next week, and sometime in the future. Each section shows a thumbnail image of the show with the next episode’s name and number, plus the scheduled airdate and how many days until it airs.

When you select a TV show, you will see the list of episodes that have already aired, plus the upcoming episodes that are scheduled. If you’ve already watched an episode, tap the check mark to show that it is watched.

Select a specific episode to read more about it and watch a short clip of the episode. In this section, you can also favorite it, read comments about it, and share it on various social networking websites.

In the “To Watch” section, you will see a list of the shows that you have saved that you haven’t already watched. In the “Calendar” section, shows are listed by their upcoming airdate. Under “Genius” see a list of recommendations based on your show list. You can keep track of your friends’ television watching activities under the “Friends” section. You must sign up for or be logged into Trakt.TV to see your friends’ activities. Under “Statistics,” see a graph of how many TV shows you watch, with the number of episodes you’ve seen and not seen. Plus, track how much time you’ve spent in front of the idiot box. 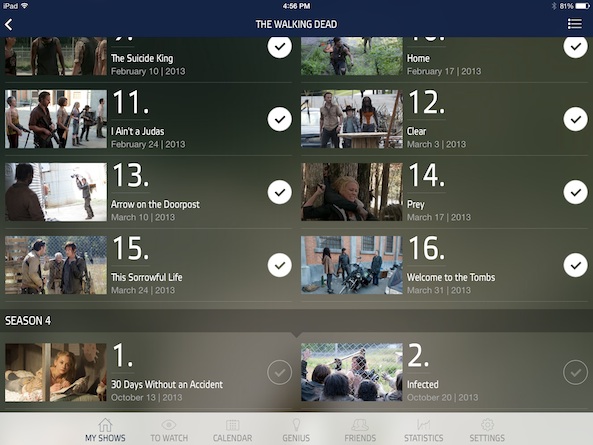 To get the most use out of this app, you can log into or sign up for Trakt.TV. However, account connectivity is not necessary to take advantage of 90 percent of the features.

To get started, go to the “My Shows” section and type in the name of a television show that you are currently watching. Then, select it from the list of shows that appear. Repeat for all shows you wish to track, including canceled shows and foreign language shows.

Then, select one of the television shows to mark the episodes you’ve already seen. Scroll down to the most recent episode you have watched and tap the check mark next to it. You will be asked if you wish to check all previous episodes as watched. Select yes if you are caught up with the show.

When you select a television show from the My Shows section, you can view a summary of the program and the year it first aired. Tap the menu icon in the upper right corner of the screen to see the show summary. The summary will also provide a list of actors, comments, and how many people favorited the show.

Once all of your shows are added and up to date with your activities, go to the To Watch section to see which programs are next on the list. You will see the name of the show, plus the first episode on the list that you haven’t watched yet. The information will also include how many shows that are not watched for an entire series. If you have a free day, you could catch up on old episodes of “Key and Peele,” or whatever shows you’ve been falling behind on.

When you select an episode from the To Watch section, you will see a summary of that episode, plus comments, likes, and sharing options. You can share shows and episodes to Facebook, Twitter, Google+ and email.

Under the Calendar view, check out day-by-day schedules of the shows you watch. Find out what is on tonight and plan ahead for TV watching, or DVR recording.

In the Genius section, see what shows are trending now, plus upcoming and current premier episodes. To get personalize recommendations, log into your Trakt.TV account. 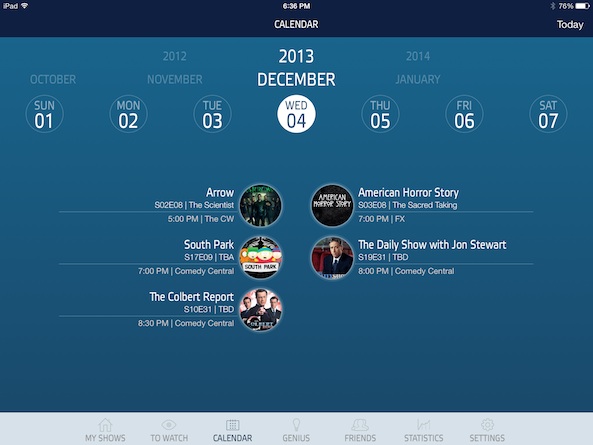 I love the way this app looks. It has a nice, clean interface with an iOS 7 design. The different sections are easy to access from the tool bar at the bottom of the screen. I love the To Watch section because it makes it very easy for me to see which shows I have a lot of catching up on.

This app crashed on me a lot. I tested it on my iPad Air and it crashed when I searched for television shows, when I tried to mark too many shows as watched at one time, and when I tried to share an episode on Facebook.

The search engine is awkward. When you type in the name of a show, and select it from the list, oftentimes, a single episode will appear. It isn’t necessarily the first episode of the series, or the most recent episode of the season. I’d prefer the search to always go directly to the entire series instead of one, random episode.

iTV Shows 3 costs $2.99. In my opinion, it is a little expensive. The app doesn’t offer many features, other than a very comprehensive database. Plus, it crashes a lot and the social networking features don’t work properly. I’d like to see this app about a dollar cheaper and updated to squash the bugs.

People who watch TV a lot are probably going to like how easy this app is to use. It offers a very comprehensive database of television shows, and gives you tons of information on plot synopsis, episode number and airdate, actors, and more. My only two problems are that it is a little expensive and crashes too often. If you do buy this app, be aware that you may have trouble saving all of your data before experiencing a crash. This app is available for the iPhone, iPad, and iPod touch. You can download it in the App Store today.

TV Tracker lets you keep track of the shows you watch. TV Show Tracker also lets you see what shows you are watching. However, neither look as good as iTV Shows 3. TeeVee 2 is another option that really looks good too.

Did you use version one or two of iTV Shows? Do you like the way iTV Shows 3 looks?