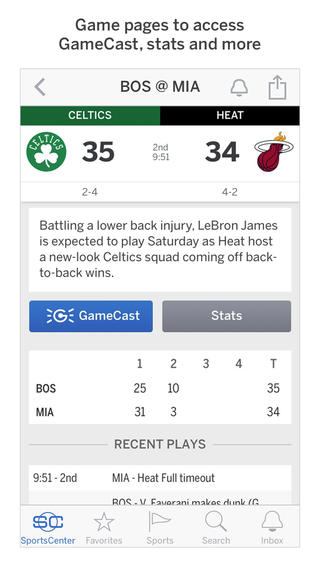 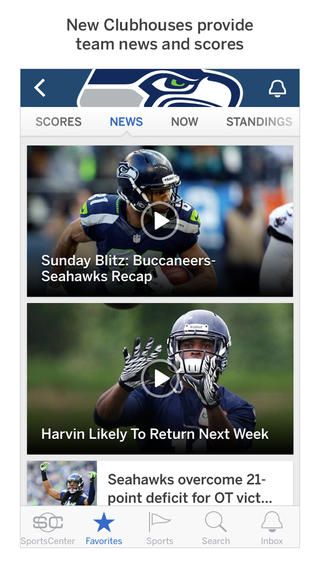 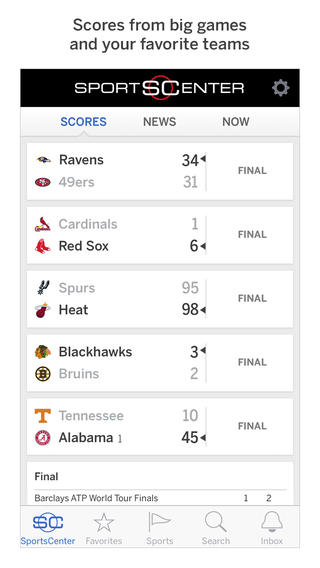 SportsCenter now provides one-tap access to GameCast live scoring information while the Clubhouses feature collects content from various sports leagues into a single hub. As part of the update, the app’s appearance has been refreshed slightly to better match the iOS 7 look and feel…

ESPN, which is owned by Disney, pushed today’s update to both iOS and Android users. In addition to personalized news stories about your favorite sports and teams, SportsCenter includes ton of video from ESPN’s cable service, often available minutes after it aired.

– Speed: Faster than Calvin Johnson going deep
– Favorites: Your team news and scores in an instant
– Clubhouses: Content central for every team and league under the sun
– ESPN Now: Your one-stop-shop for real-time scores and social updates
– Inbox: A dedicated home for personalized content from news to alerts to scores
– Enhanced Game Pages: New native sharing and one-click GameCast access
– Search: Easily navigate to teams, leagues, and sports to view content or add to favorites

Popular features from the previous ScoreCenter build, such as live scoring alerts, are all present in the new SportsCenter app.

According to Peter Kafka of AllThingsD, people in September 2013 spent an astounding 3.2 billion minutes on ESPN’s mobile sites and apps. “And for the first time”, Kafka notes, “more of them went to ESPN’s mobile properties than its desktop site”.

ESPN SportsCenter is available free in the App Store.

The download weighs 17.6MB and requires an iDevice running iOS 6 or later.