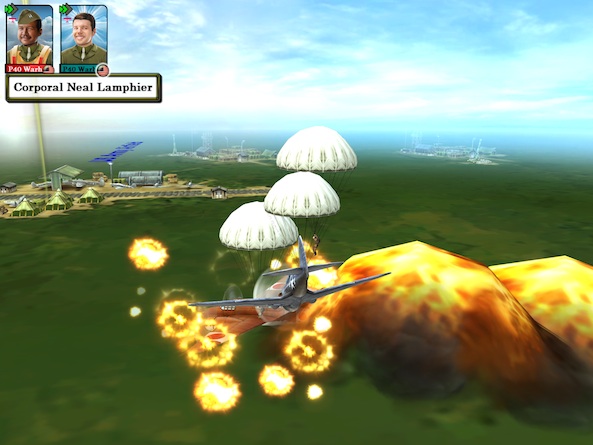 Sid Meier’s popular turn-based strategy flying game is back, only this time the battle takes place above the Pacific Sea with the U.S. against Japan as World War II is unfolding.

Ace Patrol: Pacific Skies is the sequel to the dogfight title that turned board game style playing into an epic battle that changed history. This time, you don’t have to worry about those pesky in-app purchases…

Just like its predecessor, Pacific Skies puts players on a virtual board game where movement is represented by hexagonal spaces. Players can choose to play as either Japan or the U.S. and are able to select the plane that their commander will fly.

Pilots each have their own summary card that shows their rank, maneuverability, speed, and other important statistical information. Use these cards to determine which pilots you’d like to take as your wingman.

When it is your turn, your available moves will be displayed as arrows in different spaces on the grid. Some spaces have multiple move options. Available moves are blue, attack moves are green, and unavailable moves are gray. In this game, pilots learn a lot of new flying tricks right at the beginning, so you’ll be able to direct them into barrel rolls and loops early on. Each available movement will have a designated arrow. For example, an arrow pointing straight ahead, but slightly upward means your plane will move forward at a slight incline.

Friendly territory on the board will be outlined in blue. Enemy territory is outlined in red. Try to avoid entering enemy areas or you may get a few unexpected bullet holes.

You can see everything on the game board by dragging your finger across the screen. Move your view to where the enemy planes are to help determine your upcoming moves. You can also rotate the view by placing two fingers on the screen and moving them in a circular motion. Use two fingers and pinch to zoom in and out, as well.

When you select your movement, your plane will move to the designated space. Then, your enemy will take a turn. When you are in a dogfight, screen’s display switches from the hexagonal board to a mini cinematic clip. The cinematic shows you the result of your attack. If the enemy ship is destroyed, the plane will explode and a pilot will eject and parachute down. 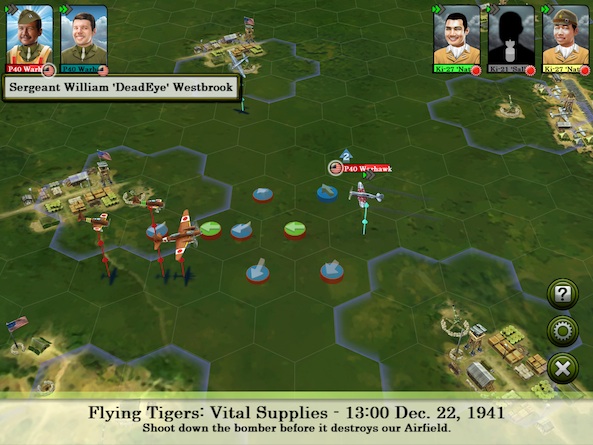 When you first start the game, you will pick your side, either the U.S. or Japan, and pick your military preference, either Navy or Army. Then, you will select a squadron commander. He will be the first pilot to learn new moves and increase in rank. The first few levels are training missions. It is a good idea to send out different pilots to train each mission. That way, if something happens to your commander, like he is captured or his plane is destroyed, your backup pilots will be experienced enough to compete against the big dogs on higher levels.

During the game, you will take a turn, using all available planes, and then the enemy will take a turn. Send your pilots into battle to complete whatever missions you are tasked with. Sometimes, you will need to take down enemy planes. Other times, you will need to destroy P.O.W. camps. Even if you lose a plane during a mission, it doesn’t necessarily mean you did not complete the task. Keep fighting until the bitter end.

If you do take damage, your plane will suffer poor performance, but you can still fight. If your plane goes down over enemy territory, you will lose the pilot that was flying that particular plane for a few levels. When pilots are rescued, they get their plane back with full health again.

As missions are completed, the pilot that was flying at the time will learn new maneuvers, like sharp turns and full loops. You are able to select the new moves that your pilot learns. Be sure to give each one a different specialty so that you have a well-rounded team.

Pacific Skies features 180 missions set against iconic WWII battles, including Pearl Harbor, Midway, and Guadalcanal. You can customize your pilots by giving them new names, and even disable male and female pilot options for a more realistic version of history. 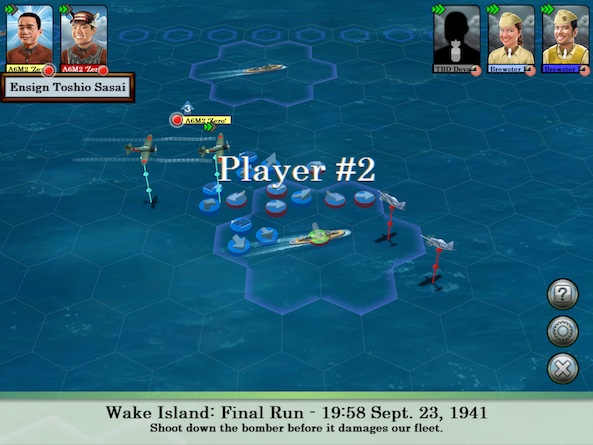 Just like its predecessor, this game makes good use of touch gestures to make a strategy turn-based board game into an action-packed dogfight. Your pilots don’t heal right away, but you don’t have to purchase medicine for them, just give them some bed rest and they will be fine on their own. You also don’t have to pay to unlock new missions. The whole game is included in the download price.

Multiplayer mode is awesome. This game is twice as fun when you are playing against real opponents who have real strategy planning.

The save and auto-save functions can be misleading. To save a game, you must select the save space two times or it will not work. The game will auto-save during missions, but there is no pause button or menu screen so some people think that the game restarts if you close the app in the middle of the mission. It doesn’t. It picks up right where you left off, even in the middle of a level.

Because there is no pause or menu screen during a mission, you can’t replay a level if you know you are doing terrible at it. I’d like to be able to start a mission over, even in the middle of a level.

Sid Meier’s Ace Patrol: Pacific Skies costs $4.99. This is the average price of a board game title. In an unusual turn of events, this is one of those rare times when a game developer decides to make something that was previously free-to-play (Ace Patrol) into a paid download. I guess those outspoken gamers who always accuse developers of being “scam artists” who are being “greedy” and trying to “rip people off” are finally being heard.

Fans of the original title will love this game. It features all of the same excitement of the mid-air dogfights and gravity-defying maneuvers, without the in-app purchase looming over your head. This game is available for the iPhone, iPad, and iPod touch. Download it in the App Store today.

Obviously, Sid Meier’s Ace Patrol is pretty much exactly like this one. If you like games designed by Sid Meier, try Pirates! for a swashbuckling adventure.