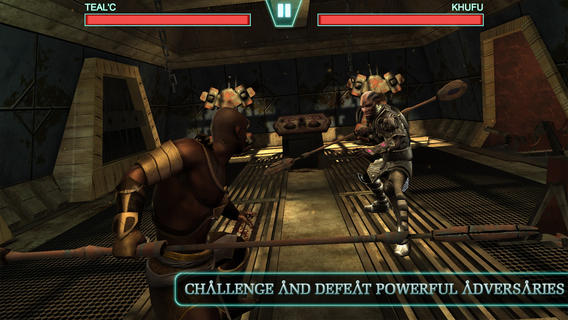 I’m pretty sure that all of the big wigs in the movie and television industry got together recently and decided to launch games for all of the geeks this week. This week saw the launch of Star Wars: Tiny Death Star, Sorcery! 2, and Lego Lord of the Rings. Those aren’t the only geek culture references, but they are big ones.

Stargate SG-1: Unleashed Ep 2 also launched in the App Store this week. Now, we can play along with all of our favorite sci-fi and fantasy characters in one day. Too bad Star Trek didn’t launch an app today, that would have really brought it full circle…

The second episode of Stargate SG-1: Unleashed is the follow up game to the star-studded first episode. In this game, players still get to immerse themselves in the Stargate universe with the voice acting likes of Richard Dean Anderson, Amanda Tapping, Michael Shanks, and Christopher Judge.

Players take on the role of characters from Stargate SG-1. The game literally starts off like the beginning of a television show. It begins with a cinematic of the issue that players will be faced with and then opens you up to play the game.

This episodic game is not like The Walking Dead: The Game, where the story unfolds around you and you must make split-second decisions based on available options. It is a 3-D shooter game where players move, shoot, duck, jump, and otherwise interact with the scene around them.

In between the game’s action, players watch cinematic clips that further the story along. The effects make you feel like you are right in the middle of an episode of Stargate SG-1.

In this second episode, players control O’Neill, Carter, Teal’C, and Daniel as they face torture, escape from their captors, fight Jaffa warriors, and try to stop Sekhmet from destroying the Universe.

The second episode takes players through an entirely new storyline with nine interactive chapters and new cinematic clips. Players use iconic Stargate weapons like the Zat’nik’tel. The plot was written by Stargate novelist Sally Malcolm.

Stargate SG-1: Unleashed Ep 2 is available for the iPhone and iPad for $4.99. It does not run on the iPod touch. Download it in the App Store today.

Did you watch any of the Stargate television shows? Which was your favorite?