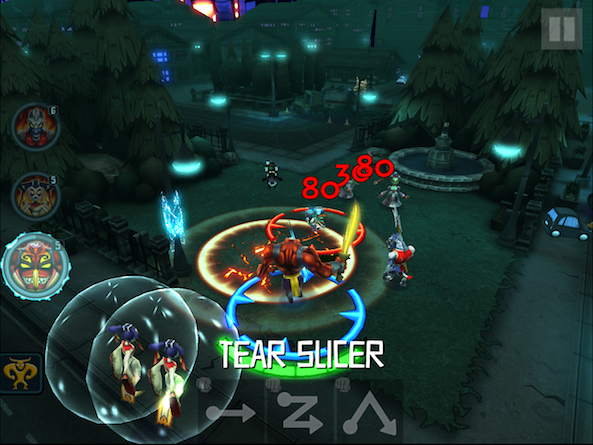 Although Halloween passed us by a week ago, ghoulish apps are still making their way into the App Store. It is possible that the developers didn’t quite get their apps into Apple for approval early enough. No matter, monsters are fun to play with any time of the year.

Monsters Rising is an action strategy combat game that involves gesture-based controls. Draw shapes on the screen to trigger attacks that will send Minotaur, mummies, and other monsters back to their mythological homes…

The game begins with a cinematic of a mysterious meteor shower raining down on a sleeping city. The otherworldly objects produce monsters of mythology from out of ancient shadows. The current monsters are based on mythological creatures from China, but the game’s developers plan to add more monsters from folklore around the world.

“We’re delighted to launch Monsters Rising. We believe we’ve created a game with enormous depth, a unique look and feel and an intuitive control system that gamers will love. And I can tell you now, we will unleash a hell of a lot more Monsters in the coming months!” said Brent Disbrow, CEO of Nine Tail Studios.

Players build a collection of 10 different monsters based on five classes, each with a different skill tree. As you progress through single-player campaign, you will collect new recruits to your horde. For each new mission, players can hand pick the creature they want to use against the enemy in a melee combat of monstrous proportions.

To fight, use a variety of touches and swipes to trigger different attacks. Players can control their monsters and fight against opponents in an all-out brawl. Take down police, military, and even monsters from other regions.

Swipe your finger rapidly from side to side to cause a Spinning Burning Slash and watch as your monster slices and dices his enemy. Trigger the Burning Blade by drawing a “U” shape on the screen. Each monster can perform five different attacks and each attack causes different damage.

As you collect monsters, you will see their specialty and a description of their myth. For example, “Horse Face” is loyal and deadly. He is a guardian of the Chinese underworld. He and “Ox Head” join together to bring back souls that have escaped the underworld.

On some levels, you will compete one-on-one against a single enemy. Other times you will be pitted against a team of monsters and must switch between monsters to cause specific attacks against your foes.

Monsters Rising is available for the iPhone, iPad, and iPod touch for $3.99. Download it in the App Store today.

Who is your favorite mythological creature?