Philips has expanded its Hue line of iPhone-controlled lighting with a new bulb this week, called the BR30. Unlike previous Hue bulbs, the BR30 is designed to fit into recessed sockets to create the effect of light shining from a hole in the ceiling.

The BR30 bulbs are designed to fit the standard E27 screw base and deliver 600 lumens of light. And like other Hue bulbs, they provide a full range of color, except the light is delivered in a downward beam instead of being omnidirectional… 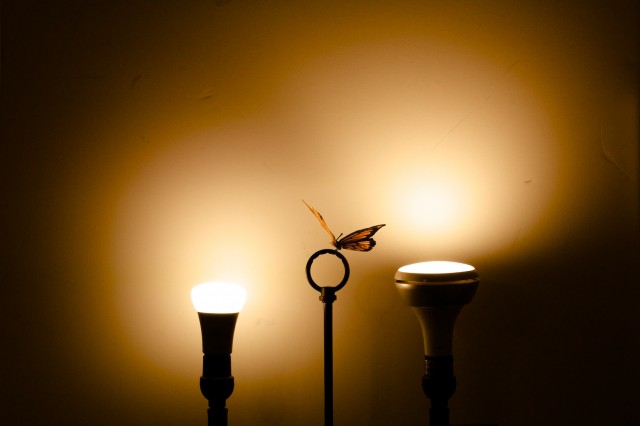 “The color and intensity of the light they produce is indistinguishable to my eyes from that of the standard A19 Hue bulbs. Tone reproduction is bright and rich, with eye-watering reds, blues, and purples, though the lights have the same problem with deep green as do the standard Hue bulbs (owing to their non-standard LED colors—the bulbs contain lime-green LEDs instead of a darker “normal” green). Transitions between colors are smooth, without any jumping or flashing to odd non-intermediate shades.”

Our own Jeff Benjamin went hands-on with the original Hue bulbs when they first went on sale last year, and he found the setup to be quick and painless. He also found the ability to control your lightning from your iPhone extremely convenient.

And Philips has made a number of improvements to the line since then—mainly opening up its API to developers. Now there are a number of apps in the App Store that can control the Hue lighting system, including one that syncs with music.

Of course, the big problem is still the price tag. Like the previous Hue bulbs, the new BR30 bulbs will run you $199 for a set of three (this does include the bridge) and single bulbs cost $59 each. They’re available now at Apple retail stores.