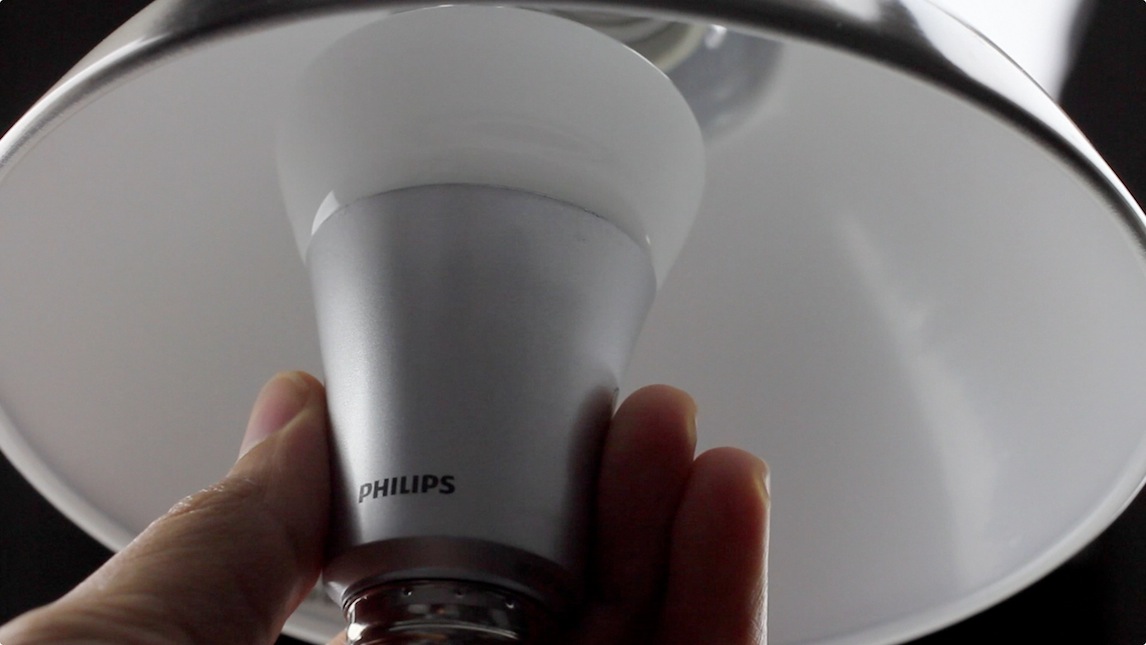 Well, first of all, there are three lightbulbs included with the package, not just one.

Secondly, these aren’t your parent’s lightbulbs.

Lastly, yes, I’m a little crazy when it comes to tech.

Indeed, the Hue personal wireless lighting starter kit from Philips is expensive; we’ve established that both here and here already. But disregard the price for a minute, and check out our full video review inside to see exactly how these bulbs work…

Key features of the Philips Hue

And really, that’s just the beginning. There are a ton of promising capabilities for the future: Think about possibilities like location based awareness, meaning that the Hue knows when you’ve arrived home and automatically adjusts the lighting. The possibilities are seemingly endless.

Now consider for a moment that a single LED bulb can go for as much as $40 at your local home improvement store, and it has none of the wireless, or color capabilities. True, that’s on the high end of the scale, but it wasn’t that long ago that prices at these levels and above were the norm, not the exception. 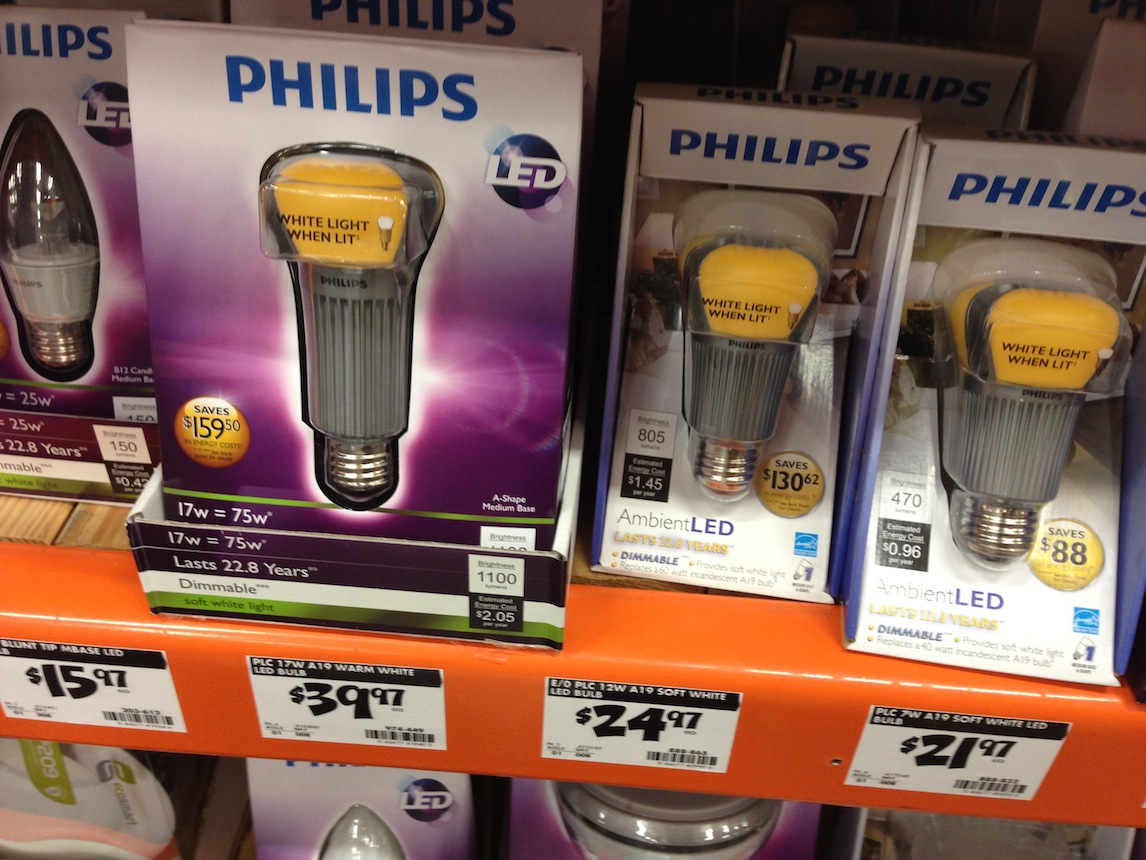 Inside the Philips Hue starter kit you get the following for $199.95:

Setup was extremely simple, as there are only three steps involved. First, screw in the bulbs at the desired location just like you would any normal light bulb. Second, connect the wireless bridge to your wireless router via ethernet, and plug in the power. Lastly, download the app, and it will auto detect the bridge and configure the settings. It’s a totally mindless effort to setup the Hue. In true Apple fashion, it just works.

The Hue app is necessary to complete the setup, and can be downloaded for free from the App Store. Once the automatic configuration is completed after first launch, you’l be presented with a group of scenes that can automatically adjust the intensity and color of your lighting. The scenes vary greatly from things like Sunset, to Pencils, Deep Sea, etc. There’s also an “all off” button to quickly kill all of the lighting connected to the wireless bridge.

Each scene can be easily deleted, renamed, or edited using the edit button located in the upper left-hand corner of the app. You can also add a new scene using a button in the opposite corner, and you can base these scenes off of photos — either from your camera or photo library — or base them off of a few built in photos that Philips bundled with the app. 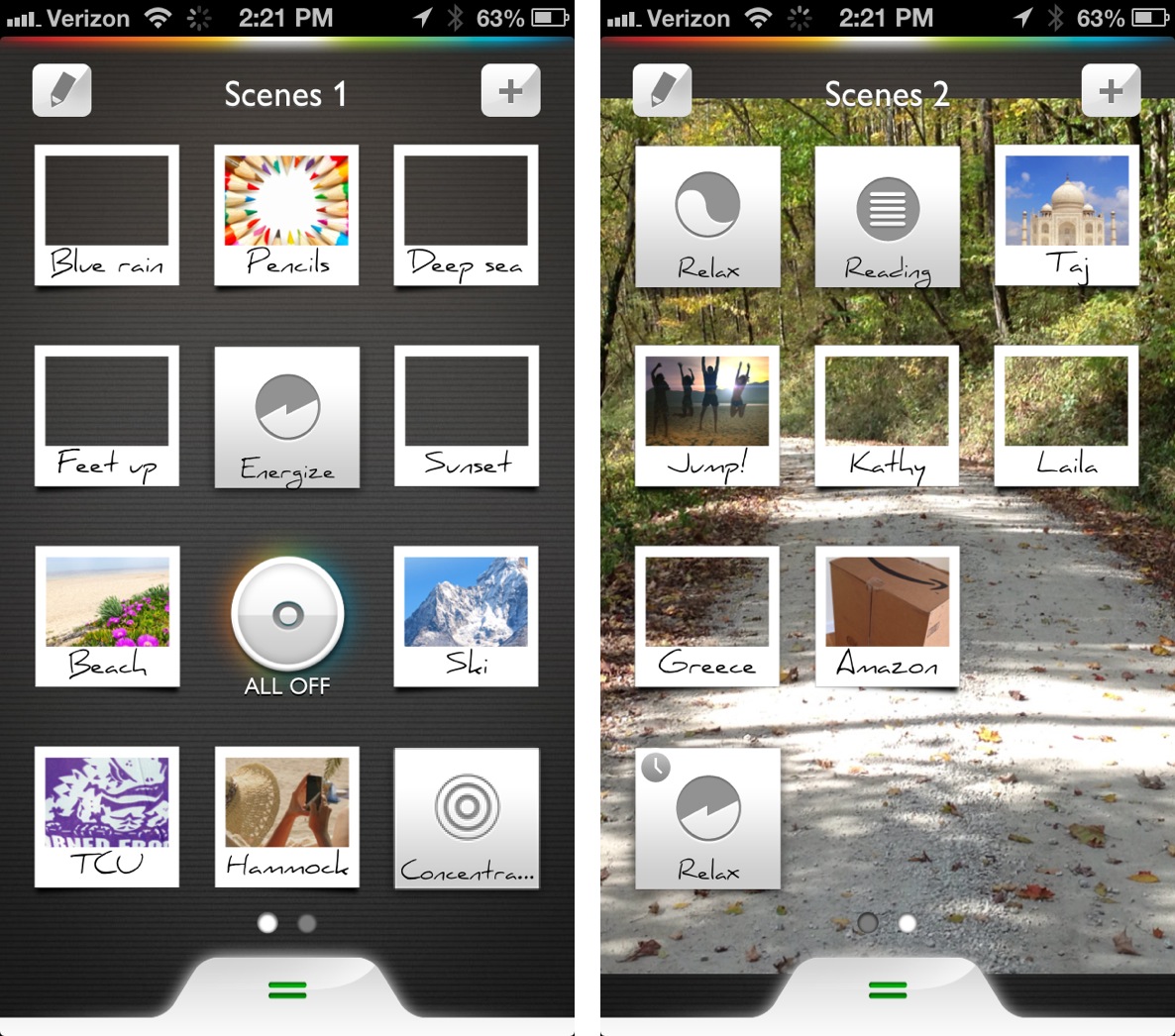 Also included with the app is an option to create a new scene from something Philips dubs as a “Light Recipe”. These are four basic types of light for Relaxation, Concentration, Energizing, and Reading. As you might expect, all of these scenes forgo the crazy colors in favor of more traditional lighting.

The scene library contained within the app acts very much like the traditional Home screen on your iPhone. There are different pages to store all of the scenes, and each individual scene has its own icon located on the page. Tapping and holding on a scene enables wiggle mode, which allows the scene to be edited, moved, renamed, or deleted. You can also rename each page, or change the background of each individual page using a photo from your Library or Camera.

You can instantly enable a scene, and hence activate your lighting, by tapping on a scene icon within the scene library. The interesting thing about scenes is that lighting can be grouped, or used individually within a scene. That means that one scene could result in three different colors and three independent levels of intensity for the three lights included in the package. In theory, it’s totally possible to have one scene control 50 lights with different colors and intensity levels for each light! Needless to say, you can really concoct some far out combinations using the scene editors.

While it’s nice to be able to individually configure each light bulb for a scene, there’s also an option to group your bulbs so that they all emit the exact same type of light. This is good news for those of you who plan on using Hue for a more modest approach to lighting. There are also provisions to completely disable certain bulbs within certain scenes. It’s all highly customizable. 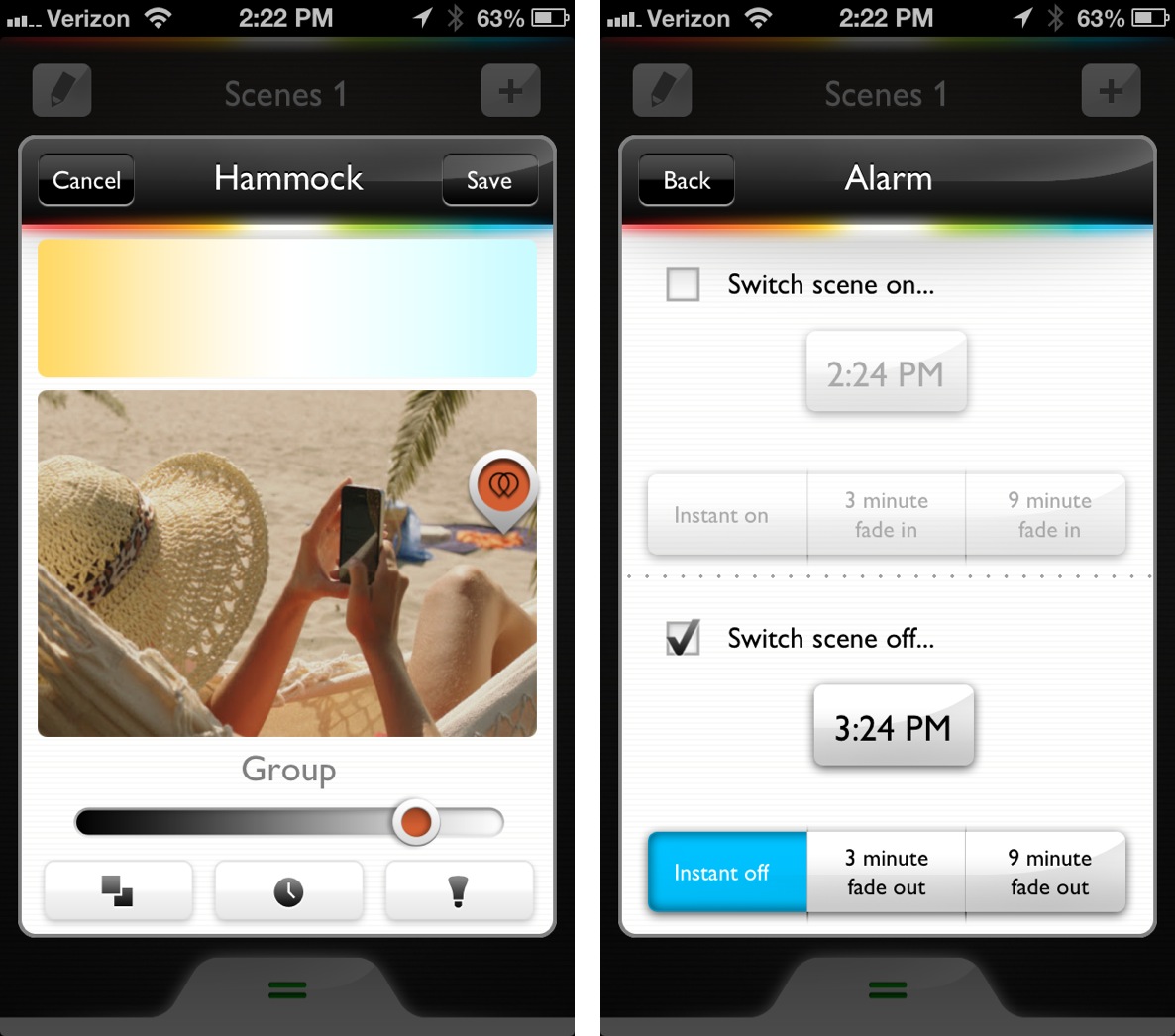 Editing scenes lends the ability to set alarms — times when scenes are automatically enabled and disabled. There are three types of alarm settings: Instant on/off, and 3 or 9 minute fade ins or fade outs. The fades allow you create less jarring scene transitions based on certain times of the day. In the end, it’s basically just a glorified timer.

On the fly editing

Sometimes you may not feel like messing around with scenes, and that’s okay. The Hue app contains an on the fly editing provision that allows you to control each light independently of one another. There you can adjust the intensity of the light along with its colors. The on the fly editor is accessible by swiping up on the Notification Center like panel resting at the bottom of the app. 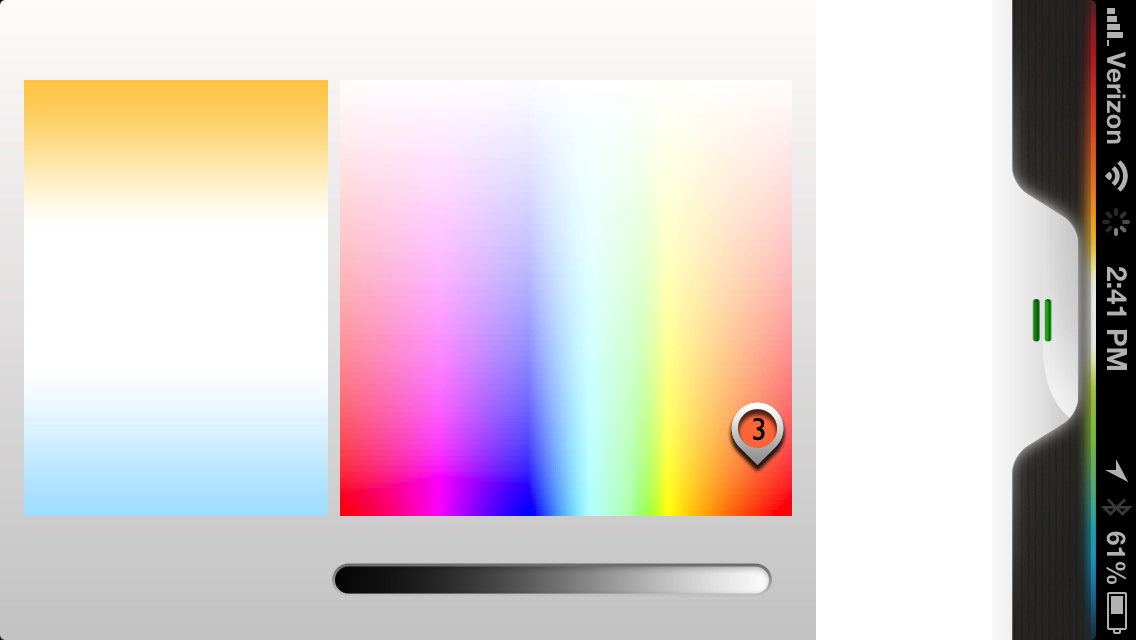 The panel talked about in the previous paragraph is also where you can access the Hue’s configuration settings. Once you open the editor, you’ll notice a little settings cog in the upper left-hand corner. Tapping that cog reveals settings for the wireless bridge, the ability to search for additional bridges and light bulbs, and the ability to edit the names of individual lights. Philips came up with a great way to identify lights that you wish to rename, as the light bulb selected flashes to identify itself until the new name is selected. 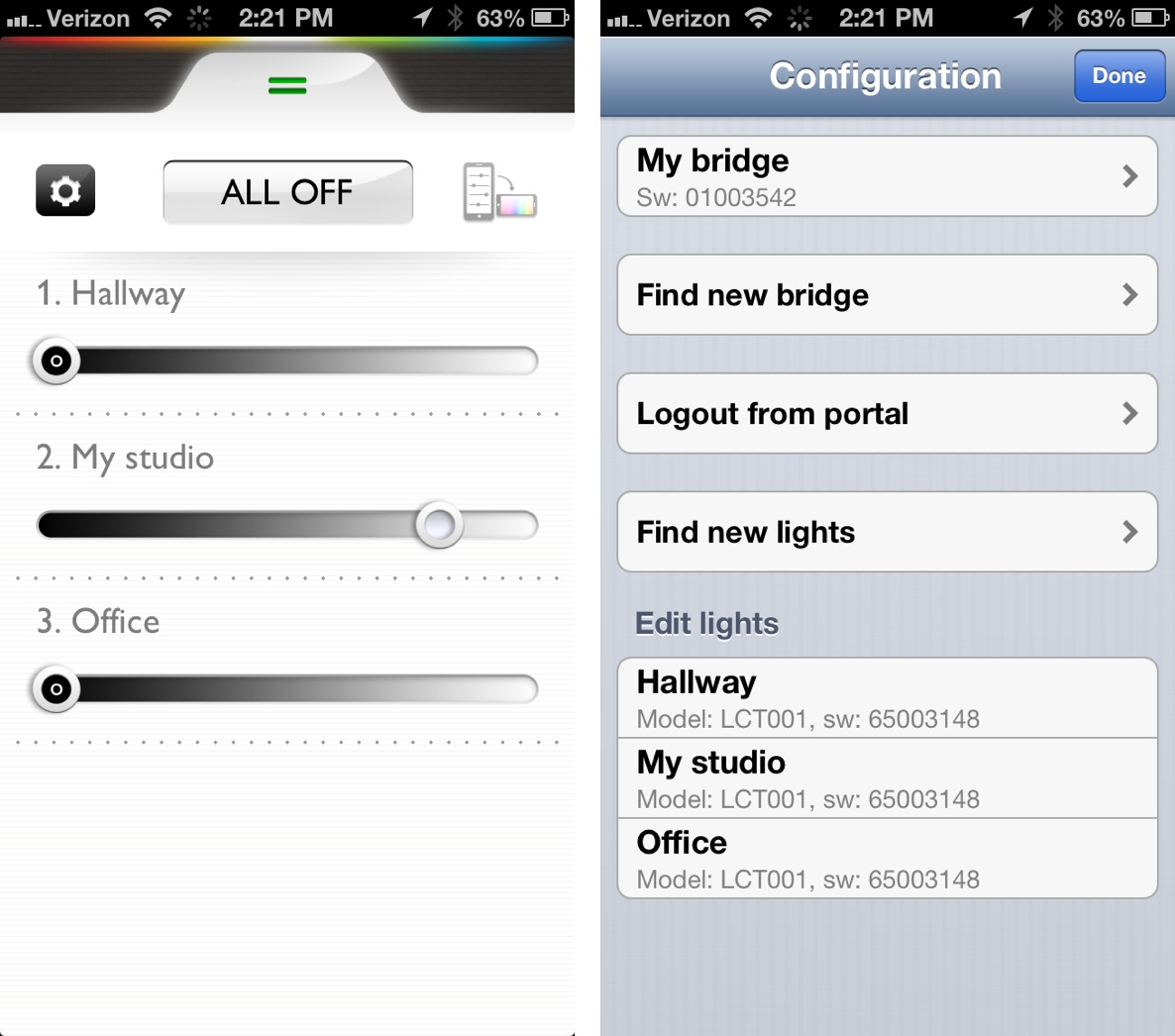 If there’s one place where the Hue stumbles a bit, it’s with the app. Unfortunately since is the only way to interface with the lighting system, it can be a bit frustrating at first. It’s not a horrible experience by any stretch of the imagination, but it’s certainly nowhere near as straightforward as the actual setup process is.

I noticed a few bugs within the app, like being able to adjust the dimmer while individually configuring a bulb, or when trying to snap a photo for a scene I was creating. Neither of those bugs are deal breakers, but it does make the interface feel a bit more clunky than it needs to be. Being that it’s the first iteration of the app, you should expect Philips to refine it over the next few updates.

Obviously, the price will be the biggest barrier to entry for most consumers. It’s really hard to justify dropping $200 on a few lightbulbs, no matter how cool or convenient they may be. Make no mistake, I love my Philips Hue, and totally don’t regret the purchase, but the price needs to go down to make this a viable long term product.

I’m also not sure how many people will actually value the ability to be able to add color to their interior rooms. It’s a nice thing to show off to friends and family, but it’s not something you’re going to want to use day in and day out.

I’m using the Hue for more traditional means, like being able to control lighting when I’m away from the house, turning on lights when I pull into the driveway, and setting timers to adjust lighting at certain periods during the day. I just don’t think the color phenomenon has enough legs to carry the Hue into mainstream success. The best part of the Hue is simply being able to control your lighting via your iPhone with just a few setup steps.

If Philips released some non-colored LED lights that were compatible with the wireless bridge for a cheaper price, then I could see the whole idea becoming more practical, cheaper, and therefore more valuable to consumers. It’s a cool system, and a hoot to show off occasionally, but unless you just have money to blow, I’d wait it out for the price to drop.