This year, Apple is offering the iPhone in more colors than ever before. The iPhone 5s comes in white, space gray and gold, and the iPhone 5c comes in white, pink, yellow, blue and green. That makes for a total of 8 colors—6 more than the handset came in last year.

But according to data from Consumer Intelligence Research Partners (or CIRP), 2 of the colors are noticeably more popular than the others. For the iPhone 5s, over 40% of customers have purchased the space gray model. And as for the 5c, blue has been the top pick… 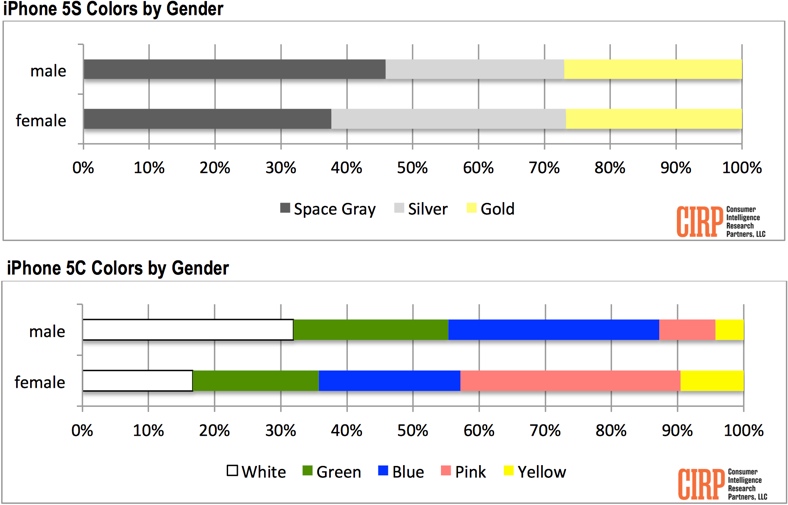 “Said CIRP Partner and Co-Founder Mike Levin, “iPhone 5S and 5C colors seem to confirm some traditional gender biases. In the iPhone 5C, men prefer the neutral white, and the Space Gray in the iPhone 5S. In contrast, women prefer lighter silver 5S and the brighter iPhone 5C colors. Interestingly, no one, including the women in the survey, appears to want the Yellow iPhone 5C very much.”

A few observations here: for one, it’s not surprising space gray has been so much more popular than gold and silver models, as it has by far been the easiest to come by. In fact, many carriers and retailers still don’t have either in stock, so yes, these results are incomplete.

But blue being the most popular choice for iPhone 5c buyers is more telling. All colors, to my knowledge, have been widely available since launch, so this stat really is about buyer preferences. It’s interesting because most of the colors were fairly close except for yellow.

What color iPhone did you get? Why?