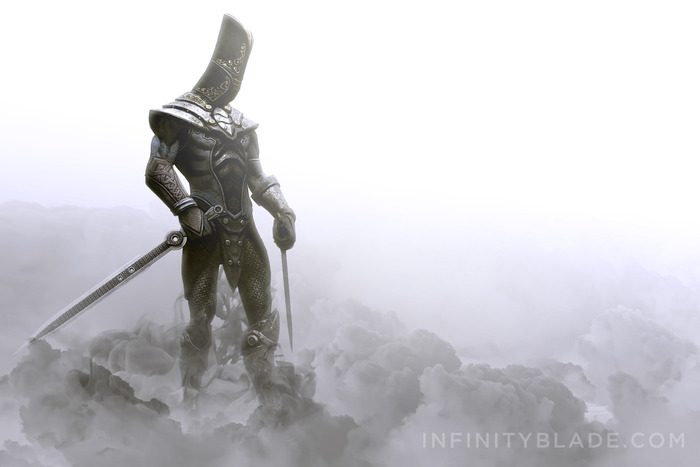 The iOS-exclusive Infinity Blade III (a $6.99 download for the iPhone and iPad) arrived mid-September as the third installment to Chair Entertainment’s elegiac masterpiece, the Infinity Blade series.

The game is about to get its first free ‘hunter’ content pack and it’s going to be something really special. The Soul Hunter update features four new explore quest and a new main quest that you can play as Isa or Siris.

More importantly, it pits your character face to face against Oslim, the Deathless Bloodmage sent by the Worker of Secrets to track you down and kill you. Just to make things a little more interesting, Oslim is armed with not one, but two Infinity Blades. More on that below…

Soul Hunter includes additional Gem, Potion and Item Forge slots to fuse, cook and re-forge more things at once. A new tiers for Goals along with three brand new Goals let you earn additional Battle Chips to power up your character and items.

“No matter how much time you’ve invested in Infinity Blade III, you now have many hours more to invest to earn Chips,” Chair states.

But the biggest news is the Deathless Bloodmage.

There will also be a new Halloween-themed Pumpkin Helm and more helms will follow at a later stage. Chair says that this time around, “each helm will be unique, so you can wear a pumpkin helm even on New Year’s Day,” unlike season-dependent helms in the previous Infinity Blades.

The four new explore quest will let you explore new areas and stock up on loot an those who’ve previously beaten the game will now be allowed to skip the tutorial section, end cinematic and credits. You’ll also find that potion, gem, and forge times have been reduced based on player feedback and completing quests gives an additional amount of in-game time elapsed.

The Soul Hunter update should be out on Halloween, Friday, October 31. The content pack will be released as an App Store download free to everyone who’ve purchased the game.

The massive 1.49GB download is Retina/64-bit/A7-optimized and will look gorgeous on A7 devices such as the iPhone 5s, iPad Air and iPad mini with Retina display. The game works natively on an iPhone, iPod touch or iPad and is compatible with both iOS 6 and iOS 7.