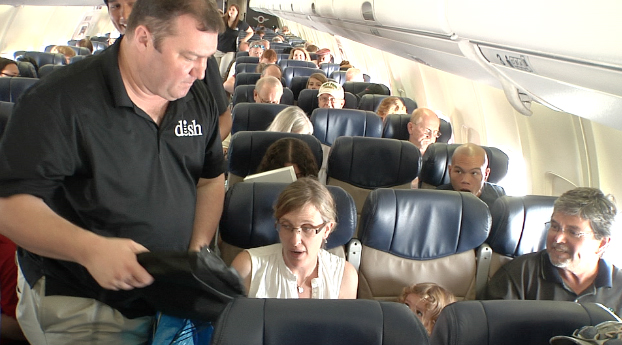 Just in time for the maddening holiday travel rush, one U.S. airline has announced plans to provide flyers with a loaner iPad and satellite programming. The ‘DISH Anywhere’ offer by Southwest Airlines and the satellite television network is available to passenger flying between Denver, Oakland and Chicago.

“With the holiday travel season fast approaching, we want to give travelers the chance to relax and enjoy their favorite programming, whether in the air on Southwest or on the ground through DISH anywhere,” DISH marketing chief James Moorhead said.

“Through our partnership with DISH, Customers have the opportunity to enjoy free live TV on Wi-Fi-enabled flights,” Moorhead’s counterpart at Southwest, Kevin Krone, adds. The free iPad 2 lending program is available for Southwest passengers flying on Wi-Fi enabled airliners between Denver, Oakland and Chicago’s Midway.

Passengers can pick up an iPad 2 when boarding, then return the tablet at the end of their flight. You’ll recall that in July Southwest and Disk partnered on the ‘Watch on the Fly’ service which lets travelers watch live television and up to 75 on-demand shows.