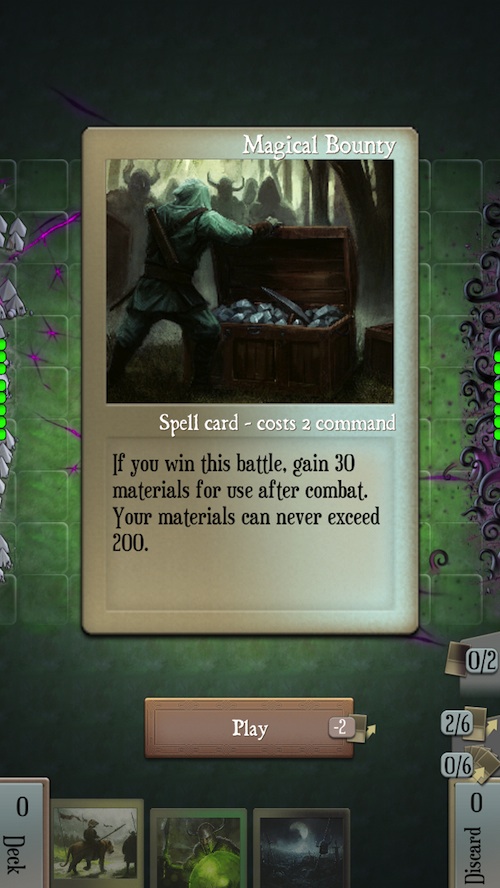 Being that I am a bit of a board game geek, I’m always on the lookout for apps that are digital versions of tabletop adventures. Whether they are land grab games, resource management games, or deck building games, I’m all in when it comes to apps that have turn-based strategy planning and stats-based battles.

EMPIRE is a deck-building game that combines a bit of 4X (explore, expand, exploit, exterminate) style empire creation. Construct your empire by gathering materials and destroy your enemies by building your deck to its maximum potential…

The game starts you off in a top-down view of undiscovered land. You will begin by founding a city. You can name your city, or keep the randomly generated label. There is a major glitch in the game’s keyboard feature, making it nearly impossible to type, so I just kept the names that were given for cities.

Your first city is placed on a section of land that has nearby mountains, trees, and drained areas of land that yield no resources. If you wish to expand your empire, you’ll have to send out an exploration party to find out where the nearest inhabitable area is. The city is surrounded by fog. To reveal what is hidden underneath, players pay to send explorers out. Once a new area is available, players can build a new city if they’ve earned a Settler point.

When you are faced with a battle, the environment changes from the unexplored territory to a battlefield. Your units appear on the left side of the field with the enemy’s on the right. The board has subtle squares to give you an idea of where movement takes place. Your playable hand of four cards is displayed at the bottom of the screen with information regarding remaining cards and command stats.

When you view your cards, you will see what it is called, how many command points it requires, what type of play it is for, and what its effects are. You can play cards in order to increase your chance of winning the battle, but you do not have control over your units, other than what the cards offer. 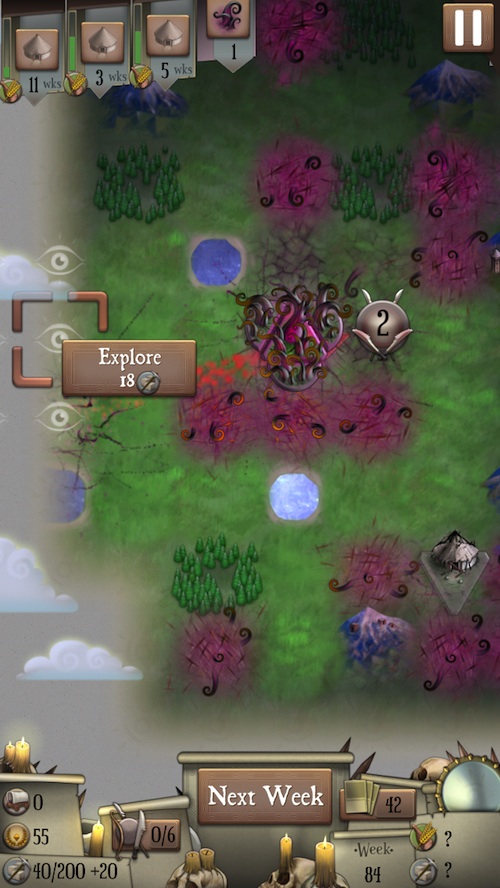 When you start the game, you will begin with a new city and 110 resources. The resources are used to build mines, explore areas, and add units. To begin, you should build a mine that will increase your resources faster, and then start sending out exploration teams. The best strategy is to attack the enemy before he gets a chance to attack you. If you don’t know where he is, you won’t stand a chance when the invasion hits.

You can then move time forward, one week at a time. Moving time forward will earn you more resources and get you closer to battle. It will also give you time to expand your cities. When you expand your city, you will be able to lower the cost to train units, send out exploration parties, and settle a new city. The best strategy is to have the most units trained as fast as possible before the first monster nest appears.

When a monster’s nest appears, you can either send out an attack, or wait for the enemy to invade your city. If you attack, it is more likely that you will have more than or equal to the number of units that the enemy has. If you wait and defend, you may be outnumbered. Attacking monster nests also yield higher victory point awards.

When you begin a fight against a monster, you will be transported to the battlefield where you will play your cards to defeat the enemy. Each card has a different ability. You can either attack or strategize with a Tactics card, cause damage with a Spell card, earn bonus stats with Grit and Valor cards, or be stuck with a rotten egg if you have a Strife card (which you will have a lot of). Use your cards wisely or your enemy will defeat you easily.

As the game continues, you will explore new lands, attack monster nests and expand your city. After a while, your city will have depleted all resources nearby and you’ll need to abandon it. If a monster nest appears in that area and you defeat it, you’ll be able to rebuild nearby, as long as it is not too close to another city.

The goal of the game is to earn 200 victory points. If you make it to 200, you can keep going, but technically, you’ve won the game. 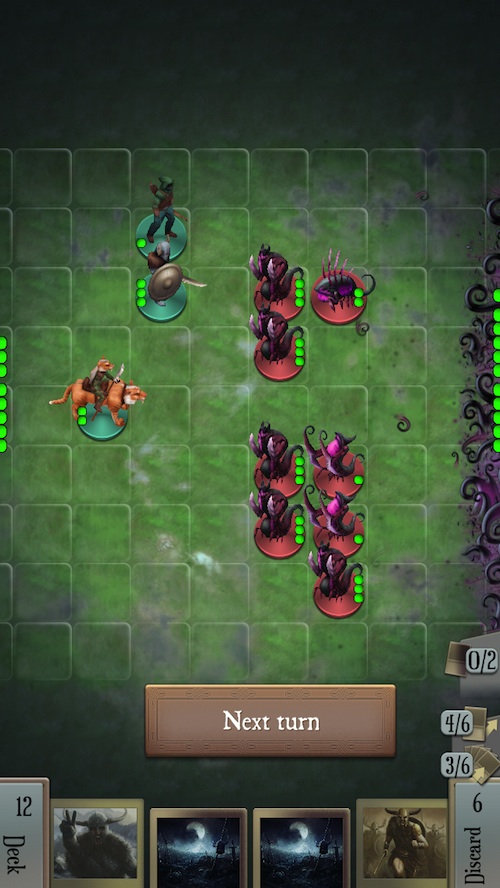 The game is engaging, the battles are challenging, and there are a lot of interesting cards to collect. I like being able to explore the nearby areas and, when I finally began to better understand the deck battles, I enjoyed the combat.

There is not enough going on in the empire-building portion of the game. You can only have three cities at a time and each city is only expandable three times. I’d like to be able to spend more time with the 4X gameplay.

The rules of battle are very confusing. I didn’t understand the redraw option at first. Even though there is a tutorial, I had a hard time with it. Additionally, there are way too many Strife cards in a deck. I had 17 strife cards in a deck of 40. This made it so that oftentimes, my four-card hand was nothing but strife cards. I regularly redrew three or more Strife cards at one time. This just made me angry and I wanted to quit. There needs to be less Strife card penalties or more ways to get rid of them other than building a Keep. It is way too unbalanced.

EMPIRE costs $2.99, which is about right for a game like this. The deck building aspect puts it into a high value range, since many board games are up in the $4.99 range. However, this game is still in its infancy and has a lot of growing to do. At $2.99, it is just below the line of being too expensive.

Although the game is in its early development stages, the game’s creator is dedicated to helping it become bigger and better by listening to player feedback and constantly working on it. If you like deck-building games, I’d recommend checking this out. The 4X strategy portion leaves a lot to be desired, but as I mentioned, the developer is working on improving that. This game is available for the iPhone, iPad, and iPod touch. Download it in the App Store today.

Rivals for Catan is a card game based on the empire building game of Catan. Empires II is a strategy game of world domination.