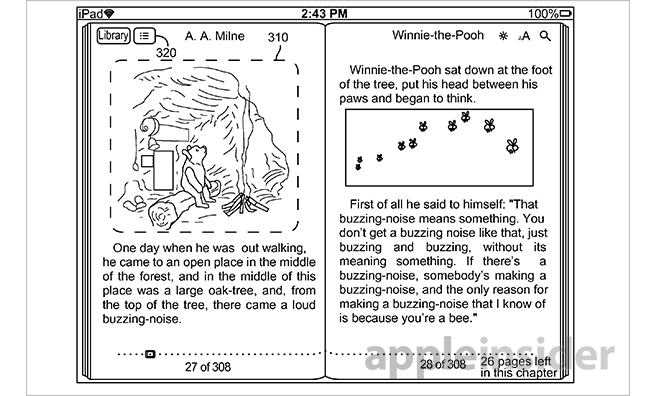 Unlike other media Apple sells, such as music and video, you’ve not been able to gift e-books – until now (perhaps). As we head into the holiday season, the iPhone maker has filed for a patent on sending to friends the e-books you’ve already purchased through the iBookstore. The patent filing would enable you to select a passage in an e-book that reminds you of someone, then gift the book, complete with a personalize message…

The 2012 patent application, titled “Personalizing digital gifts”, describes how “a user can select the appealing e-book snippet, which will bring up a contextual menu containing an option to gift the media to another party,” writes AppleInsider.

Along with the e-book, an iBooks gift can be personalized, including the portion which reminded the giver of the recipient, as well as a note, bookmarks or even a highlighted passage.

The tech giant recently explored ways to transfer digital media between iDevices, using NFC technology. The company has also patented a way to loan purchased iTunes material to others.

Apple’s working on gifting follows the firm’s antitrust conviction regarding e-book contracts for the iBookstore. As part of the settlement, the company now has a government-appointed babysitter to watch over future sales.

Interestingly enough, even though users can gift music, iOS and Mac applications and other content sold on iTunes to others, but gifting of iBooks is conspicuously absent from iTunes.

As you can see above, clicking on the down arrow next to the Buy button doesn’t produce the gifting option.

Talk about narrowing you potential market.