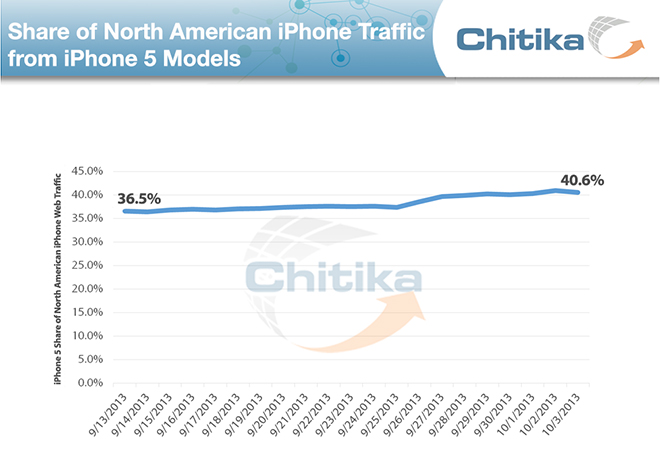 We’ve all heard the Android propaganda: vast numbers of cheap smartphones based on Google’s mobile software will overcome the quality of Apple handsets. Not so fast, say new web traffic numbers. In less than a month, 40.6 percent of iPhones online are the new iPhone 5s or iPhone 5c models.

Indeed, if this upward curve continues, the majority of iPhones will be using Apple’s latest technology at most one year old. By comparison, Android continues suffering from fragmentation marked by apps developed for a time when Apple’s iOS 3 was just launched…

According to web ad network Chitika, the 40.6 percent of North American iPhone traffic is “a remarkable achievement”. Should the trend continue, within just a few months most iPhone owners will use a device less than one and a half years old.

With the release of the iPhone 5s and iPhone 5c, all of Apple’s handsets introduced since September 2012 now feature a four-inch Retina display.

Chitika explains that the “obvious implications for mobile applications and web developers in terms of compatibility and functionality issues, but also for the technology industry as a whole.”

The key phrase in that quote is “…obvious implications for mobile applications and web developers…” While Android backers have done everything but stand on their heads and spit jelly beans trying to convince developers to write apps for the platform, iOS remains the first choice.

As a reminder, Google Chairman Eric Schmidt two years ago claimed that within six months, developers would be targeting Android first.

By contrast, two years after Google unveiled Android 4.x, most apps still target earlier versions (Android 2.x) of Google’s mobile operating system because of the severe fragmentation of hardware and software on that platform.

While sales of cheap Android handsets running outdated software are abundant, higher-end handsets with new Android versions, such as Samsung’s Galaxy 4, have had trouble gaining a foothold.

Dr. Mary Ellen Gorden of Flurry acknowledged as much recently:

This further clarifies why developer support for iOS is disproportionate to iOS’ share of the installed device base. Developers can reach more active devices by developing for a smaller number of device models on iOS and they can also capture the attention of very active users.

For some time, Apple has felt pressure to race Android to the bottom, to introduce cheap smartphones able to compete with inexpensive alternatives. But today’s numbers only show that Apple is right to use the iPhone 5c as a stepping stone to the full-featured iPhone 5s.

If anyone had doubts that Apple planned to scramble around for chump change, abandoning its luxurious roots and its crowd of aspirant consumers, the hiring of a former Burberry CEO to lead the retail charge should settle those questions.