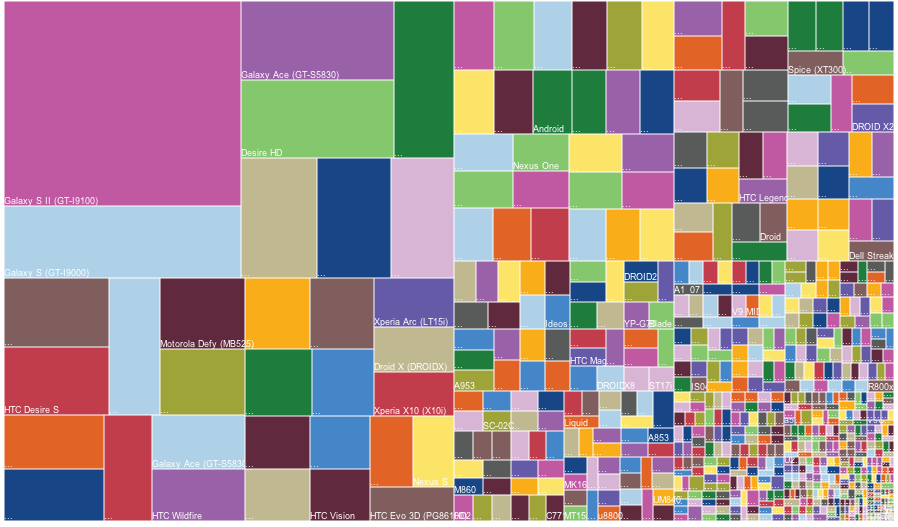 OK, so let’s make this blatantly clear: Apple’s iOS platform is by no means prone to device/OS fragmentation problems, but nowhere near like Android. In addition to just four screen resolutions, iOS developers, at best, must optimize their warez for a few percent customers who haven’t yet upgraded to the latest and greatest version of Apple’s mobile operating system.

Contrast this to Android, where Google’s proclaimed openness and the multitude of device vendors, carriers and suppliers all contribute to the vast array of Android smartphones and tablets that come in hundreds of form factors, screen sizes and price points.

An extensive survey of some 682,000 Android devices has revealed the frightening scale of Android fragmentation and its impact on both users and developers…

As you can see on the image top of post, last year Samsung’s Galaxy S2 was the most used Android device. 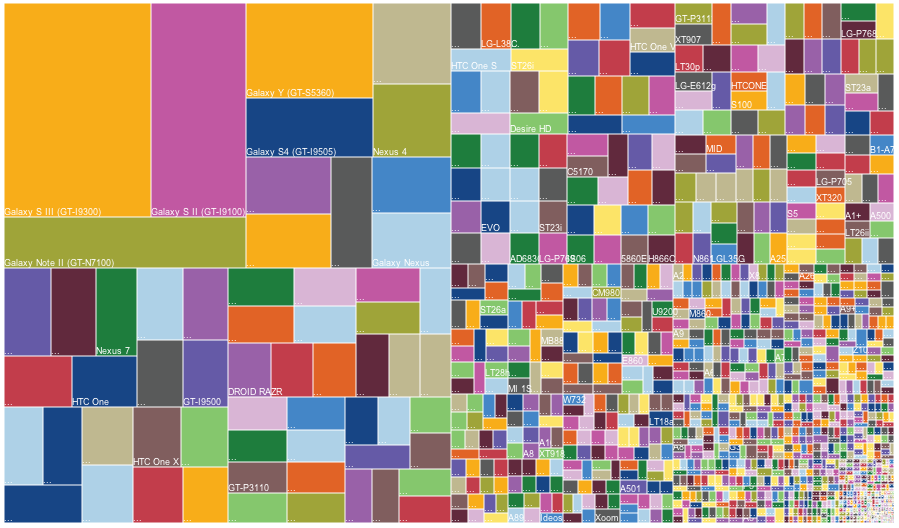 As for brand fragmentation, Samsung leads the pack by a huge margin: an astounding 47.5 percent share of the Android market is owned by Samsung devices, distributed across more than a hundred different models. By comparison, the #2 Sony-Ericsson enjoys less than one-sixth of Samsung’s presence, at 6.5 percent market share.

All flavors and variants of devices made by Google-owned Motorola ended up with a 4.2 percent share (3.9 percent for HTC). The data point clearly highlights why Google is concerned about Samsung’s total dominance of the Android landscape. 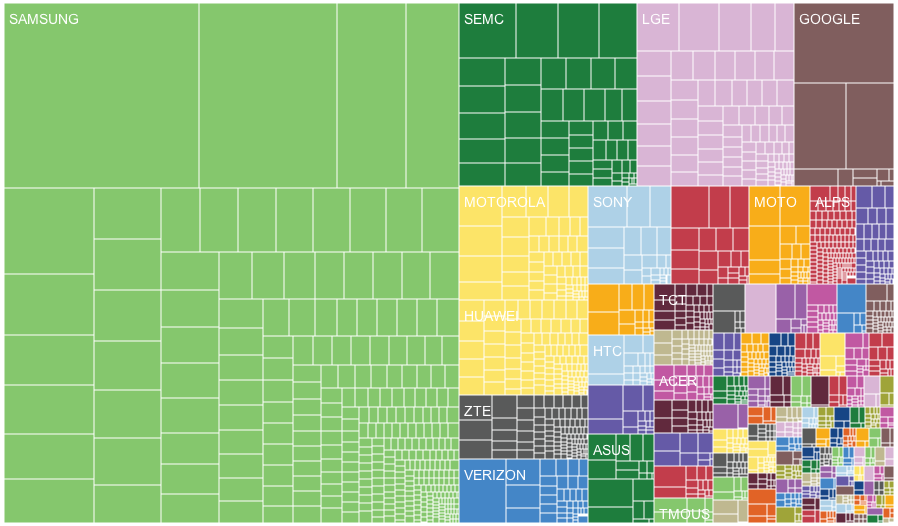 “The Android operating system is the most fragmented it has ever been,” OpenSignal remarked.

As for screen sizes, iOS developers have to think about four different resolutions as opposed to the proliferation of different screen sizes on Android. Check out the various physical screen sizes OpenSignal observed on Android phones, with the darkness of the lines representing their frequency. 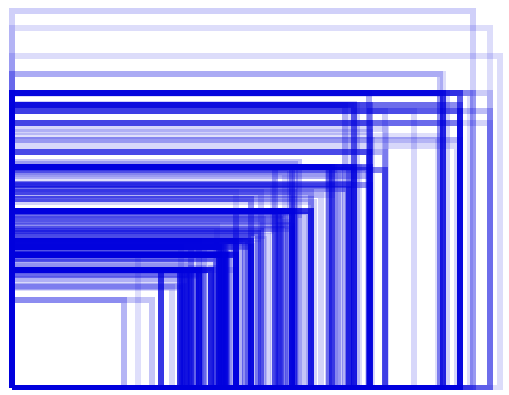 And now, compare this to iOS. 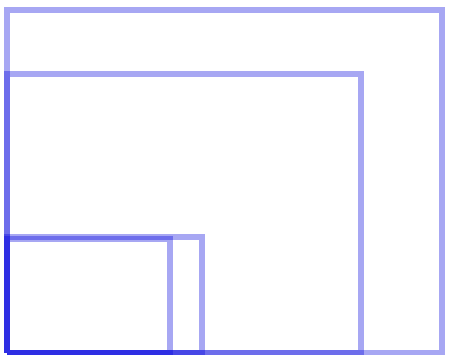 If you’re an iOS developer, coding for the platform makes a world of difference. Because Apple tends to double pixel density while quadrupling resolution while maintaining the same physical screen size, there are just four different physical screen sizes to code for on the iOS platform.

On the upside, fragmentation does serve as an enabler of the Google ecosystem by allowing for a broader, more geographically dispersed Android market. Fragmentation also benefits consumers through endless choices in terms of screen sizes, price points and feature combinations.

As for developers, the sheer number of Android devices out there represents an opportunity, even if tapping that user base entails spending significant resources to optimize their apps for multiple form factors and Android OS versions.

Take it from David Berlin, lead for the BBC iPlayer Android team, who recently said:

Today we have an Android development team that is almost 3 times the size of the iOS team.

That speaks volume about the difficulties developers faces coding for Android.

Yes, Android has now surpassed one billion activations, as opposed to 600,000 cumulative iOS device activations, but that’s beyond the point for our discussion. Here’s Android fragmentation in comparison with iOS, as viewed from the API fragmentation standpoint.

Apple’s CEO Tim Cook took a jab at Android during his WWDC 2013 keynote talk, highlighting the fact that 93 percent of his company’s customers run the latest iOS 6 version, as opposed to Android’s 33 percent of Jelly Bean users, 37 percent of Gingerbread (the most prevalent Android version) and 26 percent of Ice Cream Sandwich.

“If you do the math, you would find that iOS 6 is the world’s most popular mobile operating system, and in second place is a version of Android which was released in 2010,” Cook remarked.

It should be noted that Android stats include only those OS versions that talk to Google’s Play store so forked builds like Kindles and Nooks are excluded, as are cheap devices from no-name Chinese vendors.

“This version fragmentation is terrible for developers, as many of you know,” Cook pointed out. Not just developers: often times Android handset vendors don’t even bother updating existing devices, leaving users stuck on older, less secure and less-featured Android builds.

And where Apple simply pushes a software update to users whenever it pleases, Android makers are required to test Google’s Android builds against a plethora of different devices and carriers.

That manufacturers and carriers preload their crapware on top of stock Android experience makes firmware changes a time-consuming, costly affair so most vendors just don’t bother. But lack of updates can have devastating ramifications in terms of platform security.

Case in point: the Android Master Key vulnerability discovered by Bluebox Labs and affecting a staggering 99 percent of Android users.

The scary part: even though Cydia developer Saurik posted a fix and Google patched the vulnerability on its own Nexus devices, the majority of handset makers and carriers to this date have not supplied an appropriate firmware update.

That’s leaving your users out in the cold right there. In all their short-sightedness, Android backers couldn’t (or wouldn’t) see the long-term value in providing timely software updates.

Over in the Apple land, iOS fragmentation is bound to increase as Apple releases new form-factor devices, such as a rumored smartwatch or a purported full-on television set.

But unlike Android where developers mostly count on Android to automatically scale up their user interfaces for a target device – resulting in blown-up apps that look weird on tablets – Apple has seen tremendous success persuading its army of developers to code for iPhone and iPad natively, resulting in 350,000 submissions made specifically for the iPad out of the 900,000 apps found on the App Store.

In other words, although iOS suffers from fragmentation issues, these pale in comparison to the horrible state of Android fragmentation. Worse, fragmentation now poses a significant headache to Google developers who are required to test and optimize their apps on an ever-increasing number of devices.

OpenSignal has posted additional infographic and above charts in interactive form on its website so do check out the report and come back here to comment below.