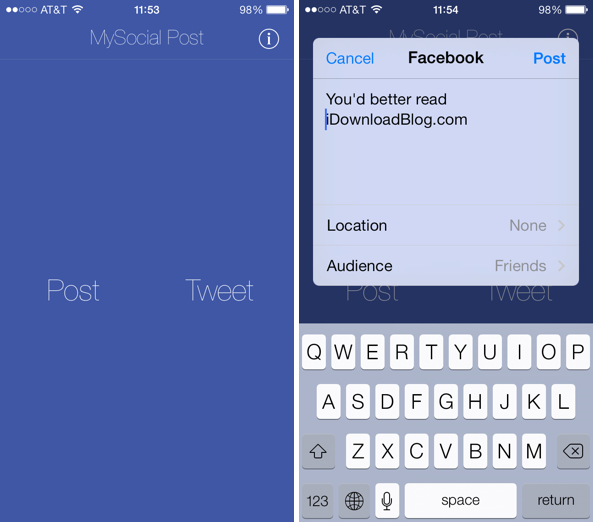 When the first iOS 7 beta versions were released, we all thought the widgets would make their way to the final release, but they didn’t. Today, we’re going to show you a workaround that allows you to quickly send a tweet or post to Facebook in iOS 7…

When you think about it, it never really made sense for the Share Widget to be in Notification Center to begin with. Sharing to Twitter or Facebook has nothing to do with a notification. It simply was not at the right place there.

At this point, I’m not sure whether Apple will ever bring the widget back or not. One thing’s for sure, it is greatly missed.

To date, there is no way to quickly share to Facebook or Twitter from anywhere on your iOS device, but as often, there is a nice little workaround that will do the trick.

Launch the app and let it connect to your Facebook and Twitter account, and you’re good to go. Either tap “Post” or “Tweet” to select what social network you want to update, type in some text and hit the “Post” button. At this point, you cannot send an update to both networks at the same time.

From now on, should you want to share something really quick on Facebook or Twitter, you can simply launch this app and quickly get to the point without any distraction.

I can already hear the angry mob complaining about how this is far from being as convenient as the original Share Widget or how it’s just as fast to simply launch the Twitter or Facebook app and update from there directly. As mentioned above, this is just a workaround. This is as good as it gets (and looks) when quickly sharing on iOS without having to launch the full Twitter/Facebook app.