Apple’s iPad mini has the most responsive tablet touchscreen, according to some new tests by Agawi. The app-streaming company recently ran it and several other slates through its rigorous TouchMark benchmark to measure the field.

The mini registered a 75ms delay on the latency test, coming in just 6ms ahead of the iPad 4, which posted an 81ms lag. And the rest of the competition was pretty far behind, with the Surface RT at 95ms and the Kindle Fire HD at 114…

Here are the full results from Agawi’s TouchMark test: 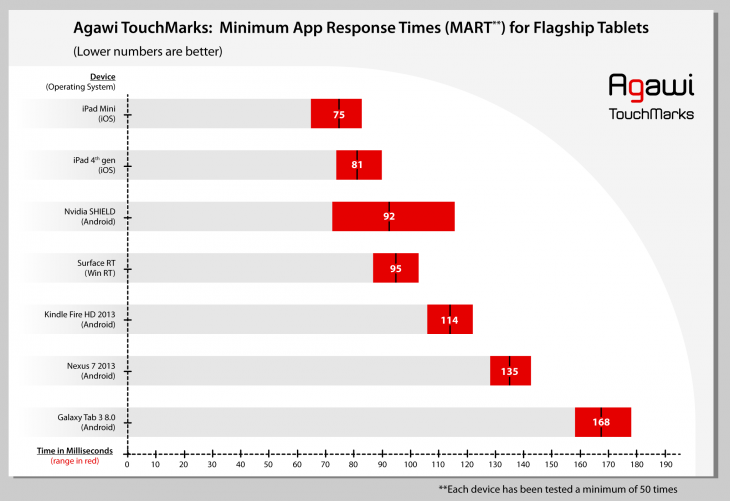 For those wondering what goes into these tests, it’s actually very impressive. Agawi has developed a custom “Touchscope” device for its TouchMark reports, which uses a lightweight application that flashes the screen when it registers a tap.

“In a result that’s perhaps now unsurprising, the iOS devices are more responsive than its competitors. Interestingly, the iPad mini – with its smaller screen and 1024×768 resolution – performs similarly to the larger fourth generation iPad and its 2048×1536 resolution, suggesting that responsiveness is not reduced by the larger screen size or resolution.

Our previous speculations continue to apply – more responsive devices may process touches earlier in the stack, poll for touches more frequently or have touchscreens optimized or calibrated to be more responsive. In our latest review of our test apps, we discovered an optimization that suggests that the GPU or GPU drivers in the devices might also add significant latency.”

The company says that it performs these tests and publishes the results in hopes that companies will focus on improving the responsiveness of their devices. Last week, Agawi ran its TouchMark benchmark on smartphones, and the iPhone 5 came out on top.