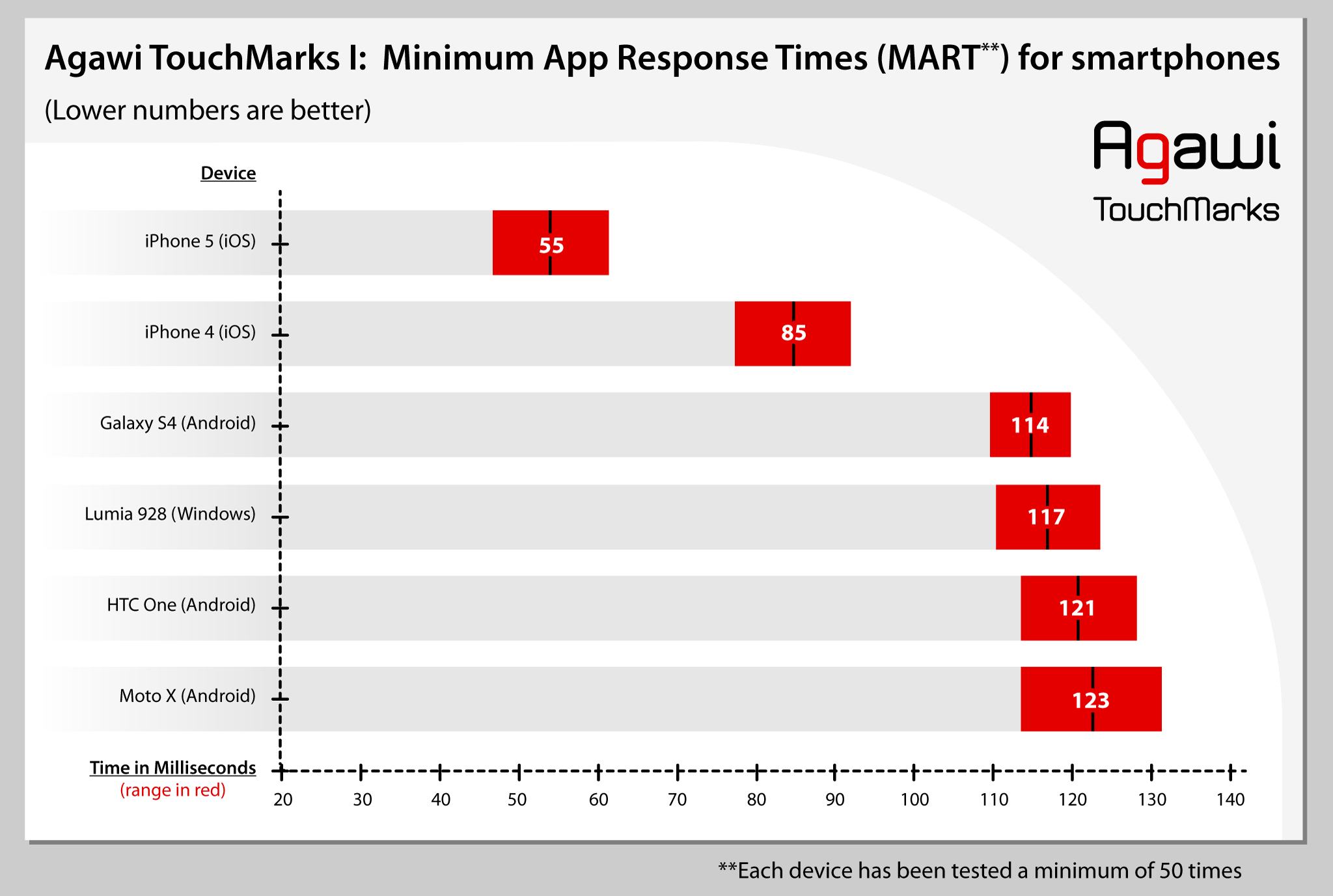 Say what you will, but Apple owns the most responsive mobile OS and has the smoothest multitouch implementation by leaps and bounds.

Unsurprisingly, the Retina display hardware is a major part of that accomplishment – and I’m not talking about pixel density or image quality.

No, the key contributing factor to the iPhone’s multitouch immediacy is the short response time of the device’s touch panel on the hardware level. In fact, Apple’s capacitive touchscreen implementation runs circles around competition, a recent barrage of tests have proven.

The iPhone 5’s four-inch Retina screen is significantly faster than any of its rivals – up to twice as fast as its nearest competitor. Jump past the fold for detailed findings…

Agawi recently carried out a series of TouchMark tests to determine the touchscreen response times of a few popular smartphones like Apple’s iPhone 5 and iPhone 4, Samsung’s Galaxy S4, Nokia’s Lumia 928, Motorola’s Moto X and HTC’s One.

As seen on the chart top of post (lower is better), the iPhone 5’s Retina screen is more than twice as responsive as Samsung’s Galaxy S4 (or any Android or Windows Phone 8 device tested) and more than 50 percent faster than its predecessor, the iPhone 4.

Part of that owes to iOS processing touschscreen input way faster than Android. That’s because iOS is based on Objective C, a runtime environment that’s significantly snappier than Android’s Dalvik and CLR runtimes.

At the end of the day, this could be exactly why people are consistently praising Apple mobile devices’s fluidness and responsiveness.

As a result, “the best written apps on iPhones will simply feel more responsive than similar apps on the current gen of Android devices”. Plus, it could be why the iPhone’s keyboard “generally feels better than the Android keyboard to many people,” Agawi notes.

Agawi’s measurements could also indicate that the touchscreen lag – observed when moving your finger across the iPhone 5’s touchscreen in a rapid succession – may have been a software issue after all, one Apple has likely patched with one of iOS updates.

That’s why Agawi has gone out its way to couple its in-house built Touchscope hardware (seen below) to custom software algorithms for accurate measurements. The kit measures the response time by capturing the time difference between activation of the Force Sensitive Resistor on the glove and the Light Sensitive Resistor positioned over the device. 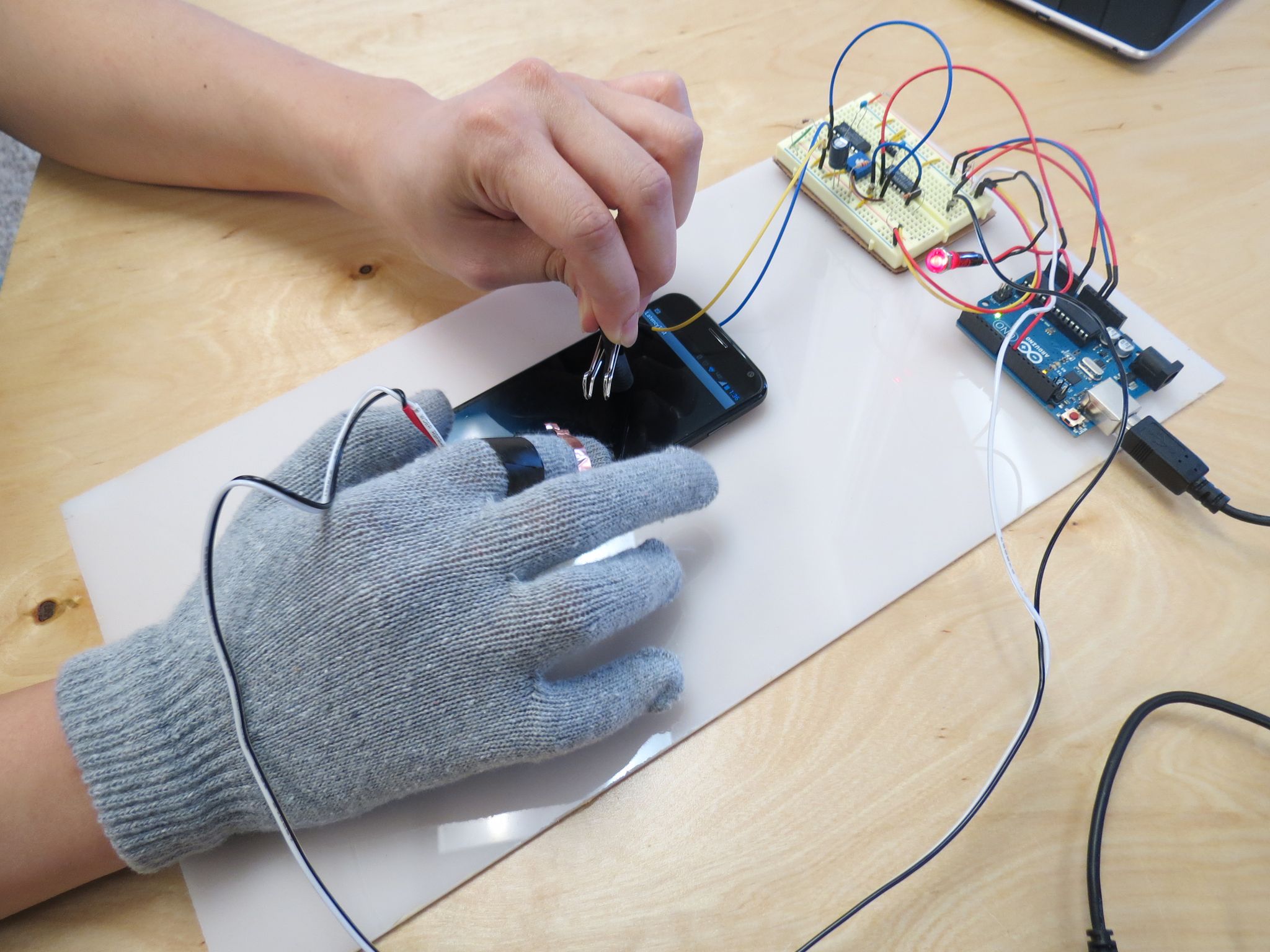 The system also employs high frame rate cameras that capture footage at 240 frames per second – twice as fast as the iPhone 5s’s Slow-Mo mode – and a special app that flashes the screen white as quickly as possible in response to a touch.

“The apps contain minimal logic and use OpenGL/DirectX rendering to make sure the response is as quick as possible,” explains the team.

Agawi originally reported TouchMark scores twelve days ago, but we figured the findings were postworthy enough to share here for the sake of discussion.

The iPhone has always been famous for its fluid animations, responsive user interface and the best multi-touch implementation on any mobile device hands down. Therefore, it is encouraging Apple’s engineers have remained focused on these qualities throughout the years, don’t you think?