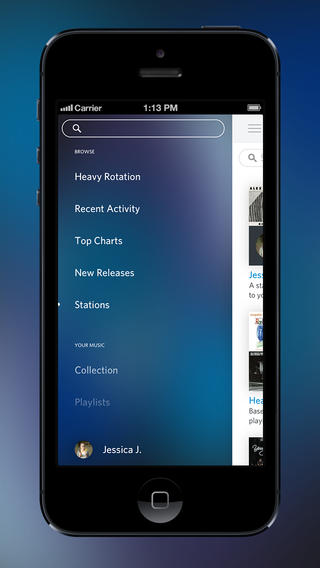 As of recently, Rdio has been making a number of moves in a bid to fight off the Apple iTunes Radio threat. Just a few days ahead of Apple’s September 10 iTunes Radio launch, Rdio unveiled a new ad-supported music service in partnership with radio operator Cumulus.

And back in August, the popular service gained such abilities as station tuning, improved search, Pandora-style personalized Stations and more.

Rdio’s latest effort to re-introduce some of the original magic involves bringing back Recommendations, a feature popularized by the inaugural 1.0 version of Rdio…

Recommendations analyzes what you listen to most and who you’re following in order to suggest albums, stations and playlists you might like – yes, albums and stations as well!

What’s best, it’s driven by the recommendation engine Echonest, which powers the likes of Spotify and BBC drawing from its database of 35 million songs.

Album Recommendations — As you listen to music on Rdio, we compile albums you’re likely to enjoy based on your history. Every time you visit Recommendations, more new music is waiting.
Station & Playlist Recommendations — Discover what stations and playlists are popular in your network and in your area.

While features like Your FM and Stations ease music discovery, Recommendations is a compelling and powerful feature that shouldn’t have been removed from Rdio in the first place, if you ask me.

The 36.5MB universal application supports any iPhone, iPod touch or iPad device running iOS 5 or later and is optimized for the iPhone 5’s taller screen.

The app has recently received a makeover proving Rdio very much cares about design. They claim a catalogue of over 20 million songs licensed for streaming.