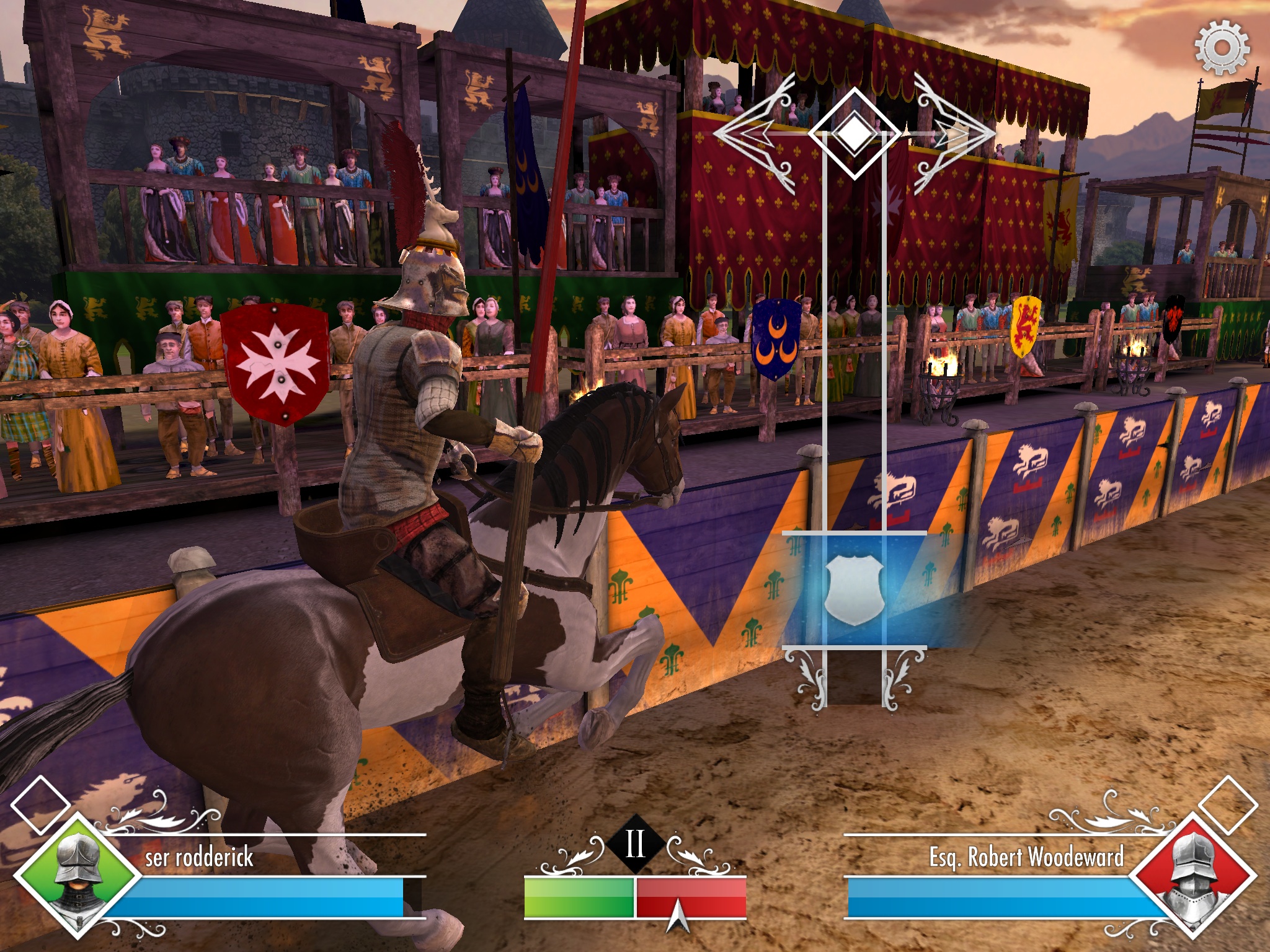 I’ve been reading Game of Thrones for a couple of weeks now. I feel like I’m completely immersed in the medieval world right now. I loved reading about the action that took place in the Hand’s Tourney. It made me want to go to Medieval Times.

Joust Legend is a skill-based game that will take you back a few hundred years and make you feel like you are in the arena with fellow knights in a friendly competition for wealth, power, and honor…

This game takes advantage of all the speed and capability of the most current iOS technology. It has high-quality graphics that look fantastic on the iPad and runs smoothly enough to feel like it is being played on a PC.

The game is set in the medieval era and your character wears armor that is so shiny you can almost see your reflection in his helm.

Your horse can be spirited. He doesn’t want to sit still at the runner’s gate and will prance around, waiting for you to be ready. As you travel along on your side of the jousting line, the setting sun will peak over the castle towers and banners will wave in the wind.

Your knight’s movements are fluid and realistic. This is the level of graphics I’ve come to expect to see in good iOS games for at least a year now.

Players name their knight, choose their horse, and outfit their character with the latest in jousting fashion. You are given your first set of armor, but can purchase better and more decorative gear with your tournament winnings. 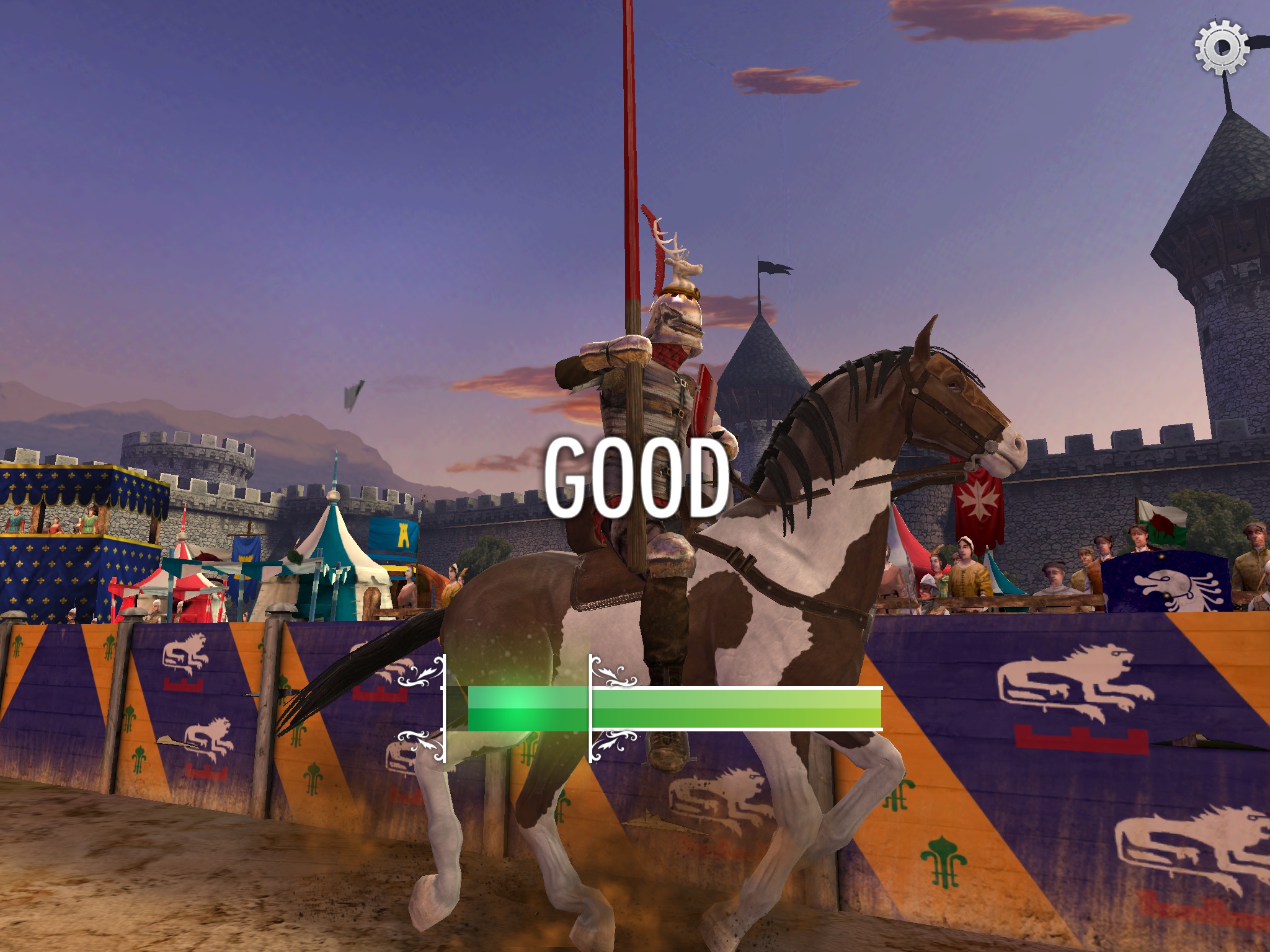 The game begins with you starting your jousting career. Your first goal is to learn how to hit the Quintain in the training arena. Once you’ve proved that you can hold your weapon, you can enter the King’s Tourney and joust for your king and country.

While you are riding, a new meter will appear that shows your lance controls. The diamond shape at the top of the meter shows how close you are getting to your target. When the outer diamond decreases in size to the inner diamond, you will have reached your target.

To lower your lance, drag your finger across the screen, vertically. With your lance at your side, tap the screen to adjust the level that you want to aim at. After you drop your lance, the meter will show you the range to hit the target, the body, or the helm.

In addition to paying attention to how far you are from your target and adjusting the lance to the correct position, you must also keep in mind that the lance is extraordinarily heavy. Your knight can only hold it for so long. If you drop it too early, you wont be able to tap fast enough to get him to bring his lance up.

The game’s controls are based on timing. First, you must launch your horse at the exact right moment to have a good run. Then, you must drop your lance at the right moment to avoid losing strength. Finally, you must tap the screen fast enough (but not too fast) to hit your target.

Each tournament has three jousts and each joust has three rounds. In order to win the first tournament, you must make nine successful runs and earn more points than your opponent.

You will earn gold when you win against an opponent. Gold is used to outfit your horse, buy better armor, and upgrade your lance. Items cost between 500 and upwards of 10,000 gold pieces. Be sure you pick the right horse because exchanging your free one for a different mount will cost you as much as 30,000 coins.

Even though it is fairly expensive to upgrade your armor and outfit your mount, there are no in-app purchases in this game. Players must earn their honor, glory, and riches by winning tournaments. 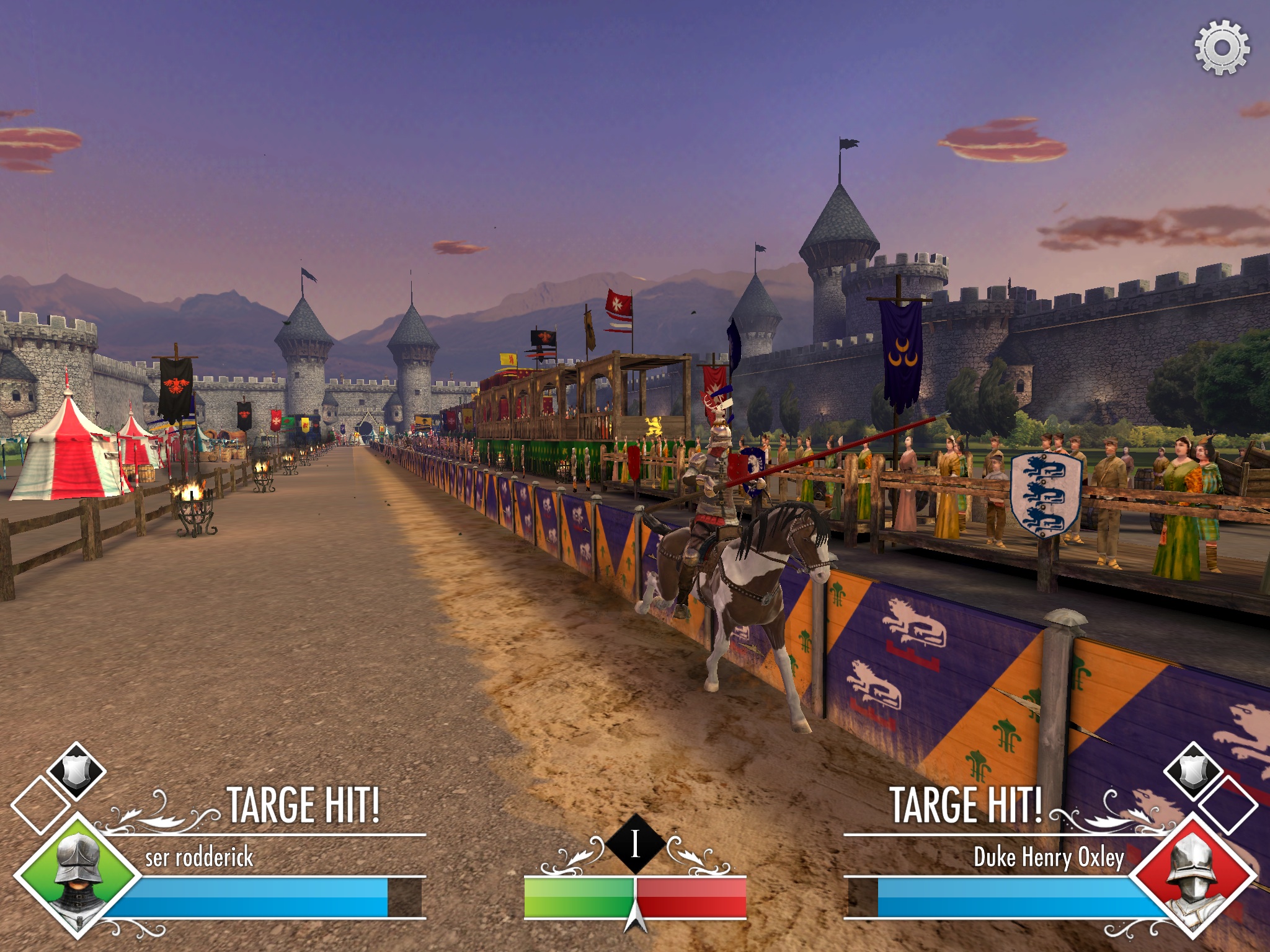 I love how good this game looks. The graphics are amazing. They really shine on the iPad. The different types of armor look especially good, even though the items were too expensive for me to buy.

I also like not having in-app purchases as an option. The fancier armor is easily an item that could be bought without having to play the game, but it makes you want to play more, knowing that the only way to get the cool helm is by earning it through gameplay.

I had a really hard time with the game’s controls. It is very difficult to figure out when the right time to drop your lance is. Then, when you tap the screen to bring it up to the right spot on the meter, it is practically impossible to get it all right in less than one second.

It might be better to have a few extra rounds in the training arena so that players can get used to the controls. There should also be a section in the game that explains the point scoring so that players can try to aim for the highest score possible.

Joust Legend costs $1.99. With games like Infinity Blade III and Call of Duty: Strike Team launching in the App Store for $6.99, the price of this game seems relatively low. You won’t be offered any in-app purchase options either. Even if you want to spend money in this game, you can’t.

This is a great app for people who like skill-based gameplay. You are only as good as your ability to keep the lance within the meters by swiping and tapping at the appropriate moments. It sort of reminds me of virtual golf games. The price is remarkably inexpensive for a game with such great graphics and smooth movement. If you like the idea of swinging a golf club or baseball bat, but would rather the sport be based in the medieval era, you’ll enjoy Joust Legend. This game is available for the iPhone 4s or higher, iPad 2 or higher, and fifth-generation iPod touch. Download it in the App Store today.

Jousting is an anime style cartoon jousting game. Last Knight HD is actually an endless runner, but you do use a lance to knock down enemies.