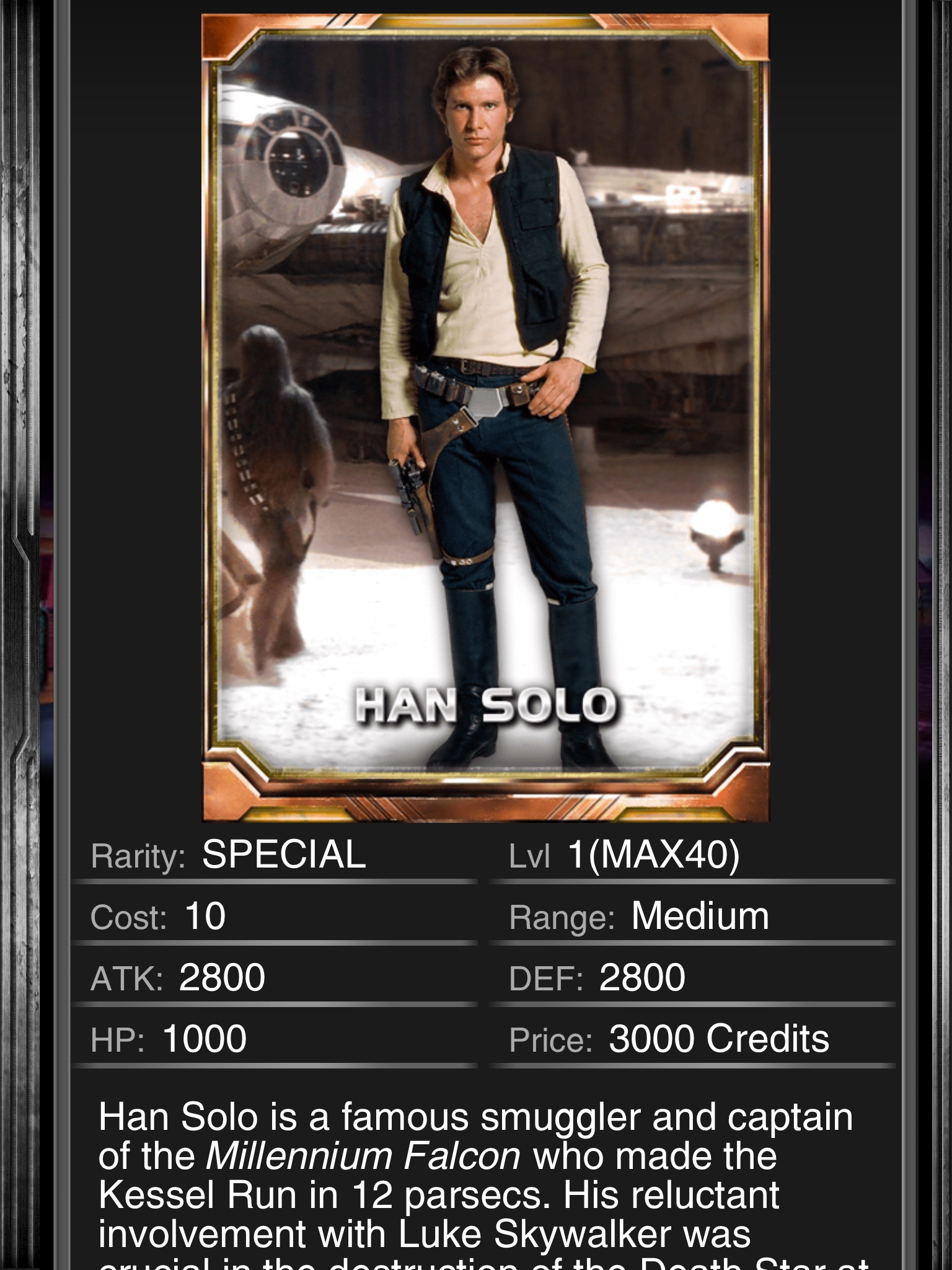 Speaking as a confirmed Star Wars fan with pretty decent creds to back up my obsession, I was both overly excited and justifiably leery of Konami’s new collectable card game (CCG) based on my favorite movie of all time.

Star Wars Force Collection is a CCG that is based on everyone’s favorite scruffy-looking Nerf herder and his band of lovable misfits. Sounds like a dream come true for sci-fi nerds, but does it live up to its namesake…

When you first open the app, you will see the iconic Star Wars opening crawl logo and then, with just a second too long of anticipation, the John Williams created theme song pounds into the speakers, starting you on your own journey to a galaxy far, far away.

After a short cinematic, the tutorial begins and you will learn the basics of the game. The app’s design is based with space-themed sharp lines with lots of text that is reminiscent of card-based battles, but almost looks too gaudy in digital form. It reminds me of a casino game in Las Vegas.

Sections are listed above and below the main screen with badge notifications listed whenever there is something new. For example, if you have new gifts in your inbox, there will be a red icon with a number next to it in the Inbox tab. The Home section shows your team’s leader, your level, status, current energy and battle points, your stats, and your leaderboard rank. At the bottom of your gamer profile, the four available campaigns scroll past like an advertisement at a slot machine.

The news section shows you information about current promotions (like card packs that you can buy for discounted prices), your leaderboard ranks, upcoming world events, player updates, and admin updates (including known bugs and fixes). Your inbox is where you receive gifts from players and admin. The goals section is where you keep track of achievements you have completed or still need to complete.

The allies section is for checking the battle history of your allies, accepting and sending new ally request, and sending or receiving messages from allies. In the quest section, players complete tasks that earn them credits, crystals, character cards, and pieces of blueprints that can be used to build vehicles. The battle section is where you compete against other players to earn credits, move up in ranks, and steal blueprints from others by winning a game. The cards section is for buying, selling, enhancing, and evolving your character cards. 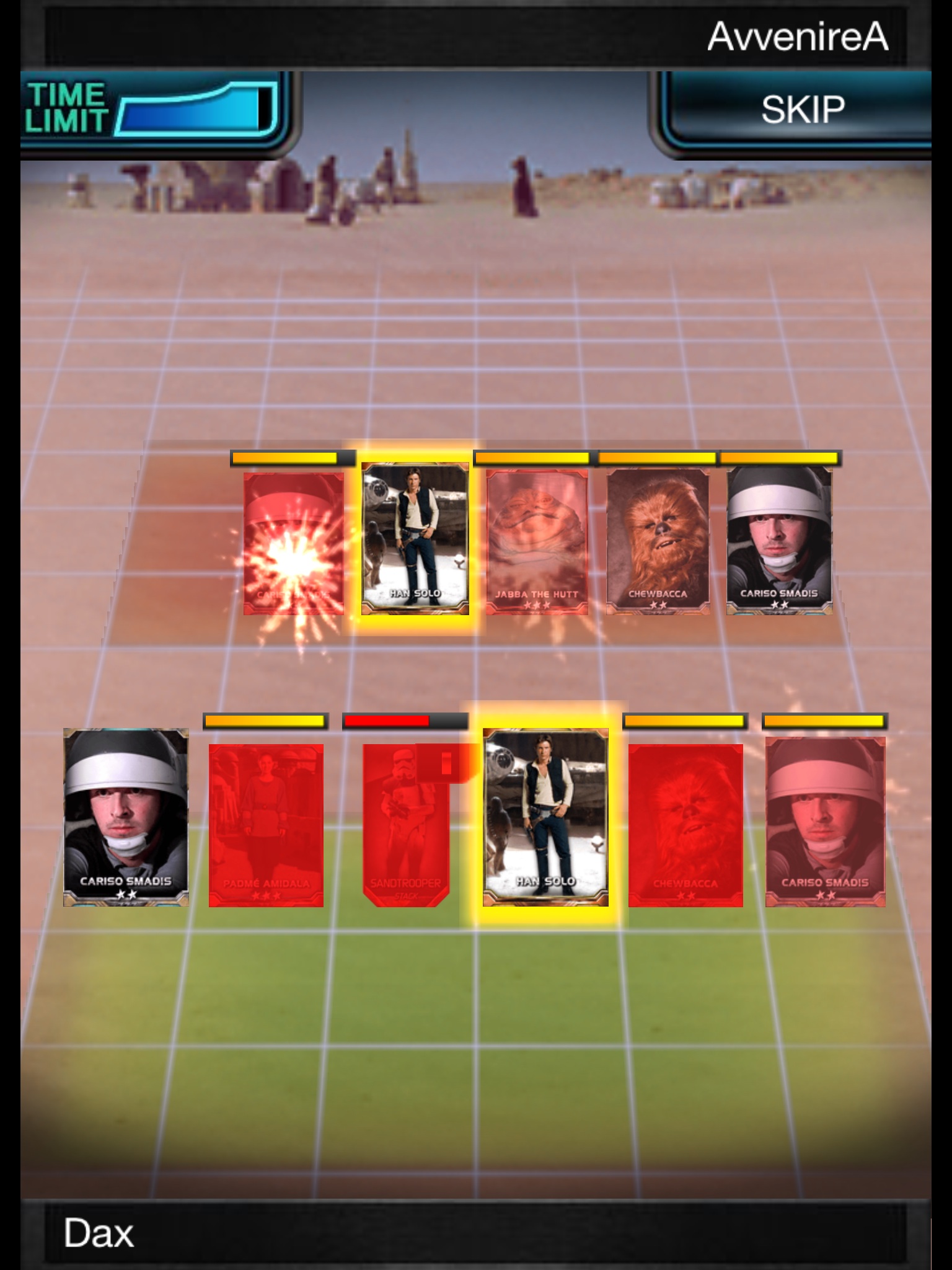 After you’ve watched the cinematic, you’ll begin by completing some very small quests, like creating a character name and requesting to be allies with others. Then, you’ll head out to do your own battling, questing, and discovering of all the things the game has to offer.

This game is made up of two basic types of play, the questing campaign and the player-versus-player (PVP) battle mode. In Quest mode, players clear out regions by shooting down enemies. All you have to do is tap an enemy to get rid of him. After all areas in a region are clear, you’ll battle a boss, which could be a group of Tusken Raiders, a team of Jawas, or possibly even Jabba the Hutt himself.

To kill an enemy, you tap the target. Killing an enemy costs energy points. Early on, you can destroy enemies for one point, but as you increase in experience, it costs more energy. Once your energy bar is depleted, you can either wait about a minute-per-point to earn it back, or pay crystals to replenish it right away.

If you don’t want to use crystals (they are rare and cost a lot to purchase), you can move on to fight in a battle instead. Once you’ve run out of energy points, just tap the Battle tab to begin. Fighting another player also costs points. These are called battle points (BP). Currently, there is a special promotion going on where players can fight in as many battles as they want without having to spend any BPs. However, once the promotion is over, players will have to spend between two and four BPs in order to play against someone.

There are four types of battles. You can either play against someone specifically to win blueprint pieces that you need to build a vehicle, get revenge on a player who has recently beat you in a match, attack players that are on the opposing side of the Force, or have the option of selecting the light or dark side in a basic fight.

To battle, select a type. Then, select a player to attack. When the “Confirm Battle” window appears, scroll down to change your formation and call for assistance.

Formation is the key to winning a battle. It is imperative that you have the right cards in the right place to attack, defend, and ultimately defeat the enemy.

When you call for assistance, you can request one of your allies to join you in battle. Tap the “Call for Assistance” tab and then select a player. His or her leader card will participate in the battle with you as one extra card to help increase your chances.

Once you’ve created your formation and selected your ally to assist you, tap the “Start Battle” button. The game plays out by itself based on your and your opponent’s card stats. This is why formation plays such an important role in ensuring success. If you do not have your cards in the right place, your enemy will have the upper hand, stats-wise, and you will lose.

To change your formation, go to the battle section and select “Arrange Battle Formation.” To get help understanding the importance each card’s role has in the game, play the formation tutorial. You will learn how to read what each card’s abilities are and how to place them on your formation.

There is an offensive and defensive formation. Be sure to edit both of them. Your defense formation is used when other opponents battle you.

You will not be playing in real time against other players. Your offense and defense formations are simply used when you select a battle or someone else selects you in battle. The only way you even know that you have been in a battle that someone else initiated is in the battle logs.

While this review may seem fairly longwinded, it actually only touches on a few of the things that the game offers. It is heavy with options, most of which cost money, but some of which are really fun. 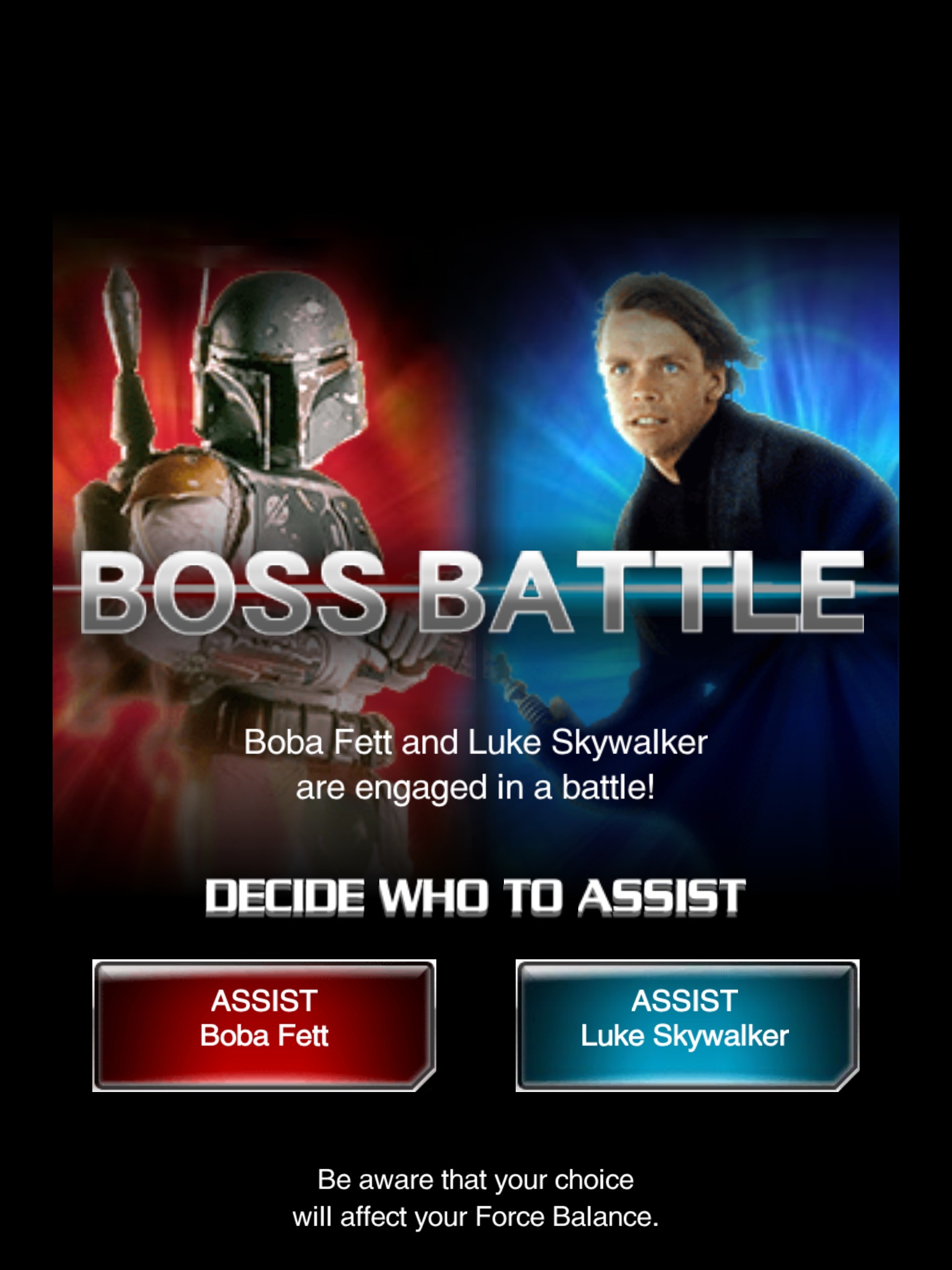 You can also evolve low-grade cards into more powerful ones. So, if you want your Darth Maul to really pack a powerful punch, evolve it by combining another Darth Maul card with it.

The game gives away a lot of credits, which is nice because they are needed to enhance your cards, which increase their attack and defense, making them more powerful.

The graphics are noticeably low in quality. I was surprised at how cheap everything looks. I’m not kidding when I say it looks like a casino slot machine.

I’d rather have most of the game be free to play and have the card packs be where you spend your money. Most Star Wars fans are obsessed enough to spend hundreds of dollars on collecting cards, even digital ones. We don’t need to be forced to spend even more money just to play the game.

Star Wars Force Collection is free to download, but thanks to the game mechanics, you’ll be spending a lot more money than you want to in order to get a decent level of enjoyment out of it. I would say that this game had a high value, even with in-game purchases, if money was supposed to be spent on collecting cards. Unfortunately, too much emphasis is on paying for more time in the game, making the value fairly low.

If you are a Star Wars nut, get the game just for the fun of collecting cards with your favorite heroes and scoundrels on them. If you are a big fan of digital CCGs, the gameplay will be very familiar and you will be used to the in-app purchase pushes that are around every corner. If you don’t fit into either of the above categories, I suggest skipping this game. Like I mentioned above, I am an avid Star Wars fan, and I was disappointed in this title. This game is available for the iPhone, iPad, and iPod touch for free in the App Store.

This is a lot like the World of Warcraft themed CCG, I AM MT. It is also somewhat similar to Star Trek Rivals.